Winnie in a Winter Wonderland !!

Here's the Winnie in her brand new winter parking spot. After living in the forest for a while, the Winnie urged us to get her out of the trees right around the same time that dark clouds and buckets of rain were starting to muddy the exit road to the sinking point. We're now parked on the edge of a large ranch with full hookups, but the winter has kept us on our toes .. 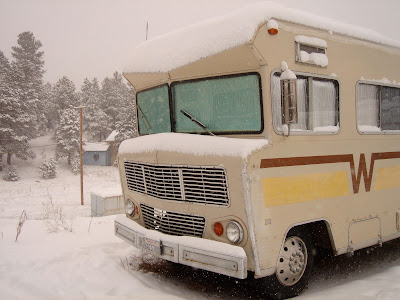 Seeing the changing of the seasons is exciting, but it's also ... really. Cold. When we got into town, it was warm and sunny - much like California. We rumbled down an old forest road lined with bright yellow flowers and enjoyed the warm nights and clear skies.

The chipmunks and squirrels were busy hustling for their harvest and securing their winter savings, and so were we. In fact, we were so busy setting up our new studio and pouring candles day and night that we forgot that we had some nest feathering of our own to do ... 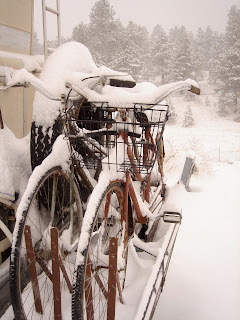 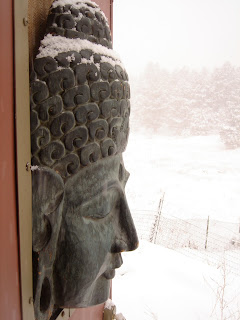 The freezing air affected all sorts of things - both tanks, the one that collects all the water from the sink and shower, and the other one right below the toilet, also froze solid. Charming, right : ) Without being able to dump the sewage, it was only a matter of time before we reached the brimming point, and then ...

Hot showers are now heated on the gas stove, and since the drain pipes are frozen, the only way you can take another shower is to chip the icy sheet of last night's water out of the shower pan, throw it out the window, and boil up another : ) A good heater could have solved all of this, but we pulled our nonworking heater out of the Winnie long ago in CA ... "What would we need a heater for ??" Ha!

Out of curiosity, we brought our wax thermometer home because we were wondering what the temperature was under the covers. The thermometer is meant for cooking, so once it hits 32 degrees (the freezing point) it just malfunctions and says "Low". 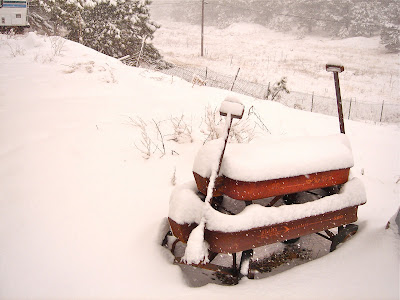 We were most interested in how warm the two of us made it under there, but as a basis of comparison, we slid the metal probe under the sheets before we crawled up into bed.

The digital screen plummeted through the 30's and then "Low". We both looked at each other. "It's below freezing under the covers??" I crawled up first .. Juwels was fiddling with something, such is the case most nights. I'm convinced she does this just to get me up there to cut the chill back before she nestles in. Which is funny because she always jumbles the sheets around so much that my little heat pocket floats out and crystallizes in mid air. 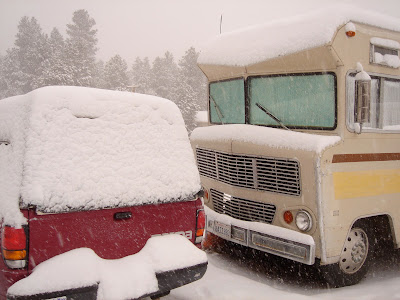 I am happy to report, though, that once we were all settled in under the covers, the thermometer spiked drastically. Within seconds we were climbing through the 30's, 40's, and before a minute or so went by ... we were back in California, in the toasty 70's ... well, from the neck down that is : )

Since the holidays, our workload has slowed a tad, and we've been able to pay a little attention to Miss Winnie. Recently, we spent a night padding all the windows with some classy silver insulation and running the oven packed with chestnuts and squash : )

Juwels likes to spark an inferno of candles on the counter and up on the ledge next to the bed. "These little guys put off some heat !!" After spending many frigid nights putting work before comfort, we finally started experimenting with different kinds of heaters - gas heaters burn up oxygen and emit toxins, (not good in such a tight space .. getting sleeepy .. ) and electric heaters cost a fortune to run and don't do that good of a job ... and even though we've been over and over the romantic idea of installing a little potbelly wood burning stove .. Juwels still whimpers at the conclusion that it's probably not the best idea in our little foam box. "But it would smell soOOooo heavenly! "

We have a good sense of humor about the challenges of the cold multiplied by the lack of time that we've had to prepare, but we're excited to soon bee spending more time away from the studio (which, by the way, has also had a broken heater for the last few months) and warming up our little Winnie in her winter wonderland : )