Meet Magic ... she came to us 'molting' (which, besides the thinning feathers, is kind of like  menopause .. no eggs, for a while as things reset. Come to think of it .. why's the word "pause" in the human version ? ?)

She's scrappy do-o, with a pink baboon ass, but surprisingly agile and spry in spirit. Maybe all the energy she's saving by avoiding the roost is going directly into the chi of grasshopper hunting (she always finds the biggest ones & beats the other ladies to the peck when they spot the same bug) and she's a rock hopp'n, cluck'n fool.

With all of that said, when the hens first got here, we actually had a couple days when we found three eggs (one from each hen) under the deck (the hen house wasn't built yet, and they took to nesting under the deck when duty called .. and then they moved even farther still under the pouring room (actually right below the floor where juwels' desk sits... must have been some good energy in the spot : )

We were so proud of her for adding an extra egg to the pile when she could, and that was almost like magic right there. Of course, we thought she was so happy here (outside of her old pecking order) and eating fresh grass and wild harvested food .. and that's why she mustered an egg here and there for us, but then ... 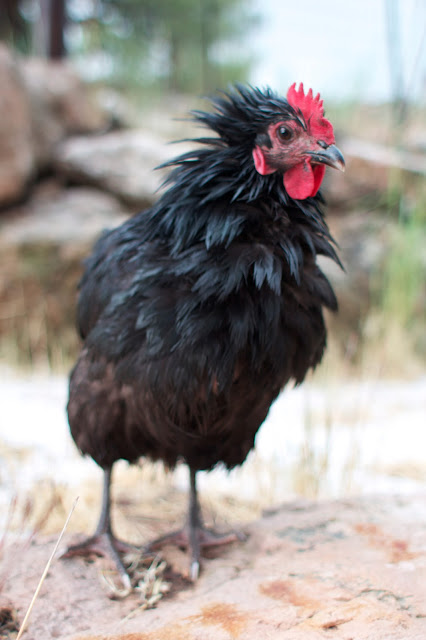 The biggest egg, ever. ..  How would we know that Magic was responsible for this mammoth offering? Well, mostly because I can see the hen house from the pouring room, and every time I'd see an old bird waddle up there mid-morning and then scurry back down the ramp - winded and headed straight for the cool watermelon under the shade of the tree, I'd have to run out and lift the flap. "Got an egg!!" And on the day in question, I'd already lifted an egg from Midnight and MariXa .. so there was only Magic left. 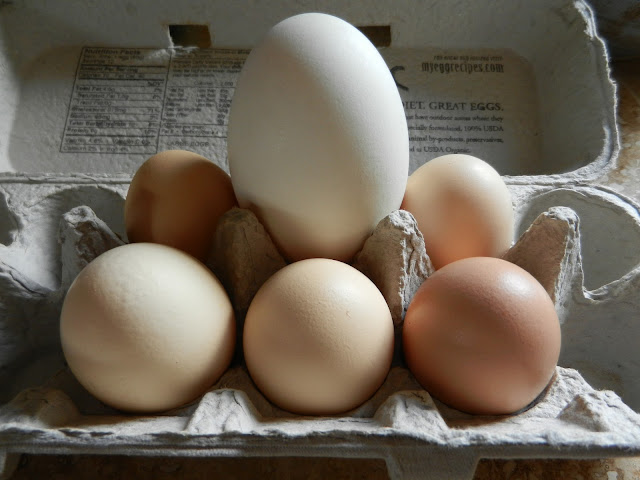 Note: For the last two days before finding this egg, Magic (who hadn't been named yet .. instead, referred to as 'The Molter') hadn't been laying anything. She was pretty regular before that, so we wondered if she might have been backed up/ if we'd get multiple eggs on her next go... I also checked under the deck with the head lamp, thinking she might have had the urge with no time to get to the hen house ... but .. nothing. Until ... . . .  . 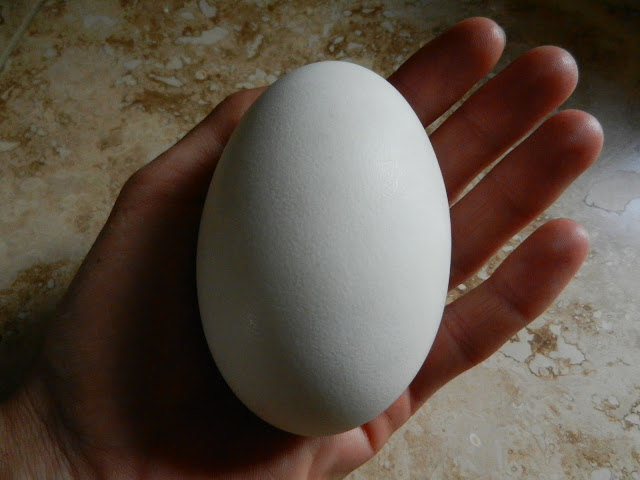 We actually left the ranch for half a day (had an appointment in Sedona) and when we came back, even though I knew there probably wouldn't be a third egg, we both walked straight back to the roost to check in and make sure that all three ladies had put themselves to sleep before we locked the door downstairs.

In the roost, all three girls sat, tired from a full day of peck'n and-a scratch'n, and there under Magic was an egg ! It was lighter in color than we were used to - normally brown, but we'd seen a few light tan ones, and as I reached in there and snuck the egg out from her downy warmth, I couldn't really tell how big it was. (the roost is just over eye-level).

"The molter layed us an egg," I said as pulled my hand back through the opening I got a good look at it.. "Jesus - this thing is HUGE ??"

Juwels locked the flap down and called through the door to her, "Good job, Mommy!"

"How did that thing even come out of her?" I said. "It's like a friggin ostrich egg.. !" (I knew it wasn't an ostrich egg. It wasn't that big, but for a chicken it was huge.)

Juwels took it from me, laughing.

Then I sobered up a bit and narrowed my eye, "No .. somebody's screwing with us," I said.

We're on a big property, and there are a few other people here, but I didn't think it was their style to play jokes on our hen house so quickly after we'd cut the red ribbon. We went inside, and juwels told me that she'd heard of huge eggs before .. and lumpy ones .. and ones with shells like squishy latex. She wondered if the egg would have two yokes .. or four ??

Online, the whole thing started to make a bit more sense. We learned how an egg is made: the chicken has many yokes in a cluster, and as it moves down the line, the white and shell form around it. This one site on How a chicken makes an egg literally outlined and explained every different freakish egg that could be ... including a Giant egg ... with another egg inside ?? !! Extremely rare, but it has happened. We found a news brief in China about an egg like that, and another one on Huffington Post.

I asked about the color - we'd never gotten any white eggs, and she said the one she saw online - the egg in an egg - was lighter outside and the inner was dark. It was then that I decided to suspend disbelief, and even start thinking about how amazing this would be if our girl laid one of these golden eggs.

"Okay .. so we need to film the grand opening of this thing," I said.

Juwels agreed, but said that she had to dress up her kitchen first, and that we'd have to wait until the morning when the light was good. I didn't want to wait that long. We weighed it - 6 oz, almost 3 times the size of a normal egg. We shook it, and heard something large thumping around inside. And we held it up to the brightest light in the hive, but still ... what was inside was a mystery. Still, slightly skeptical, I kept threatening to crack it while she was researching more and more online. Every time she'd squeal ... "NooOOoooooo.. baybeeee !!" and cut me off in the packing room where I was theatrically stomping over to the kitchen. "Wait .. "  I'd made up my mind that if this egg had two or more yokes or was any other sort of anomaly then I'd be sold, and the answer was inside that thin white shell.

The next morning, juwels saw the property owner walking up to his truck, and she raced out, apron flapping in the breeze to show him the egg. With both of her hands behind her back, she ran over with a big smile to tell the story. When she finally got to, ".. and then we found THIS!" she showed him two hands, one with a normal egg and the other with the giant.

We were ready for national news ... the Guinness Book, Ripley's, possibly a tour with the egg suspended in a bullet proof bubble and surrounded by armed guards. The Molter had woken up that new morning with the new name ... no ... the legacy, "Magic".

... All the while, my little brother (pictured below) was laughing his ass off. I had accused him of tampering with our hen house that night when he and his wife had come by for dinner on the deck, but he had been pretty convincing, and raised a good question, "where the hell would I even get an egg like that?" And that, I couldn't figure out. He even admitted to thinking of a chicken prank involving the scattered black feathers of a feather duster, and a missing chicken ... but then he decided that that wasn't funny at all. He seemed clean, but I still played cool .. like I knew that somebody had done it .. that I wasn't falling for it .. which got me thinking of the neighbors, but that didn't make any sense either, and then there was juwels with all the you-tubes and farmer's blogs, so what can I say .. I got swept up in the whole thing and relaxed my skeptical old hairy eye and praised the chicken ;  >

A few minutes before we were going to setup the tripod and the frying pan, I get a text: "It's a goose egg that I got from the C.S.A, ya jackass ; )"

So in the end, the whole thing was a fraud, but she'd heard that name, and we couldn't take it away from her. She struts a bit more proud these days .. famous for her fifteen, and finally named. MariXa, Midnight & Magic. Black magic.

At least that's the way it's told 'round the old campfire ... 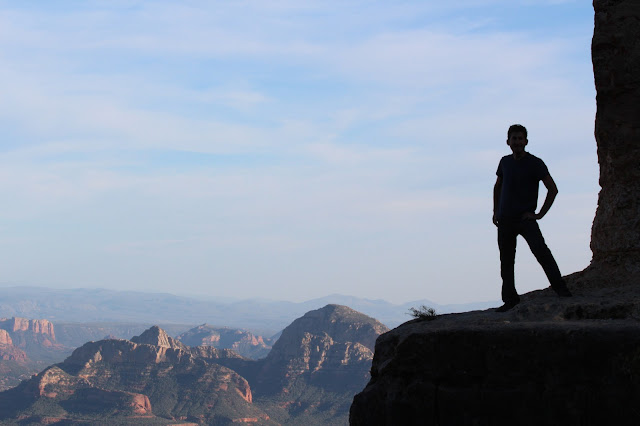