As the title suggests - these bits of writing would be homeless without this page. I'm gearing up to start on a large work of writing - but have been blowing off steam with journal blips and other fictional mishaps ; )

I'll be adding things here as they come / as I find old things in work notebooks  ; )

The tub faucet leaks in this old country trailer ...

And I catch the drips in a pail, and once a day, I collect enough to fill the back tank of the toilet for a recycled flush.

(... you know we're a mellow-yellow household)

And every time I do that .. about 3 million other people flush a bugger, kleenex or a daddy long legs down the toilet, and offset that savings ..

Have I failed in my effort to help the planet?

No - I choose to think that instead I've succeeded in the ongoing battle we face with apathy....

Don't worry about how big the problem is .. just do your part and hold your head high : ) 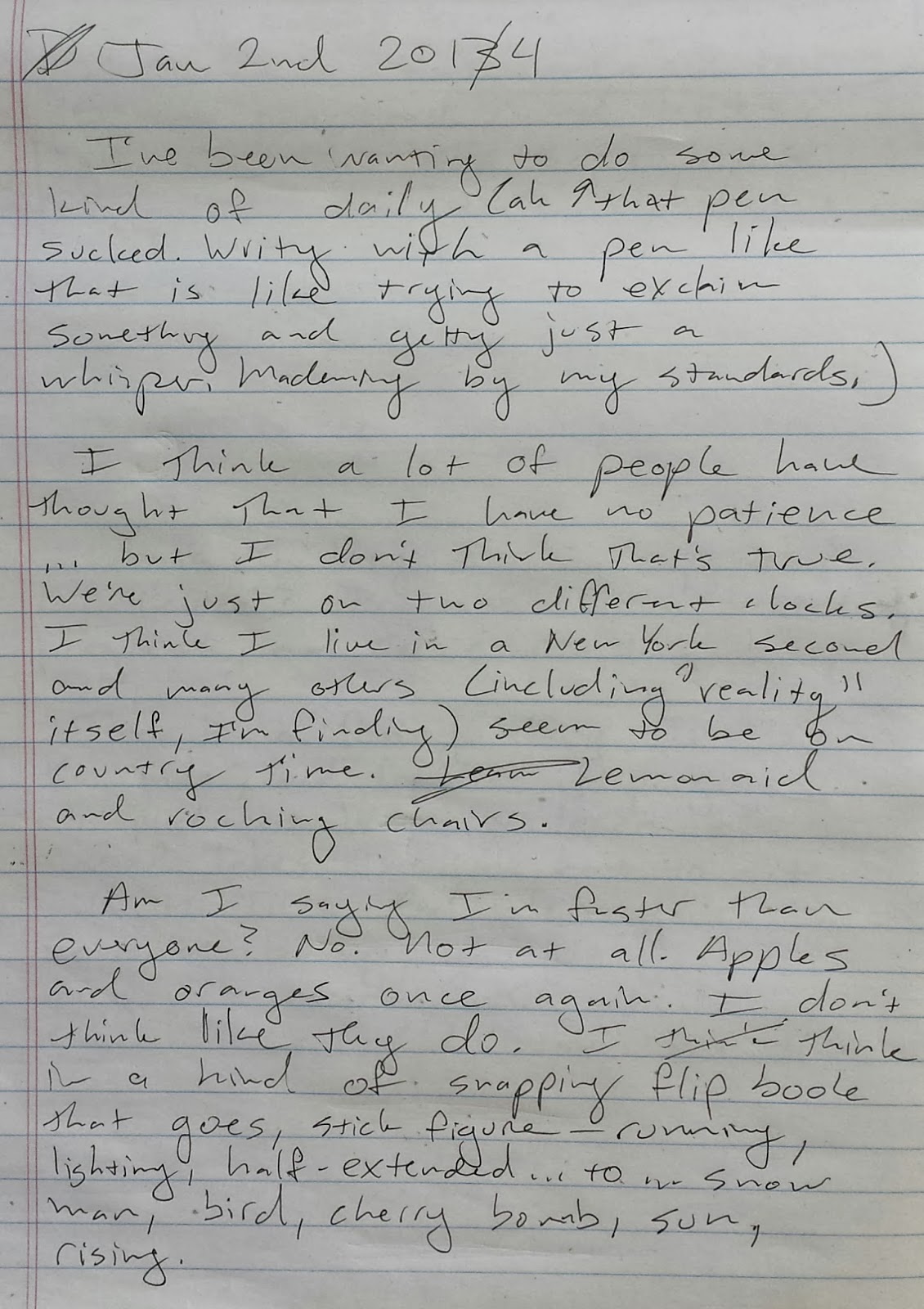 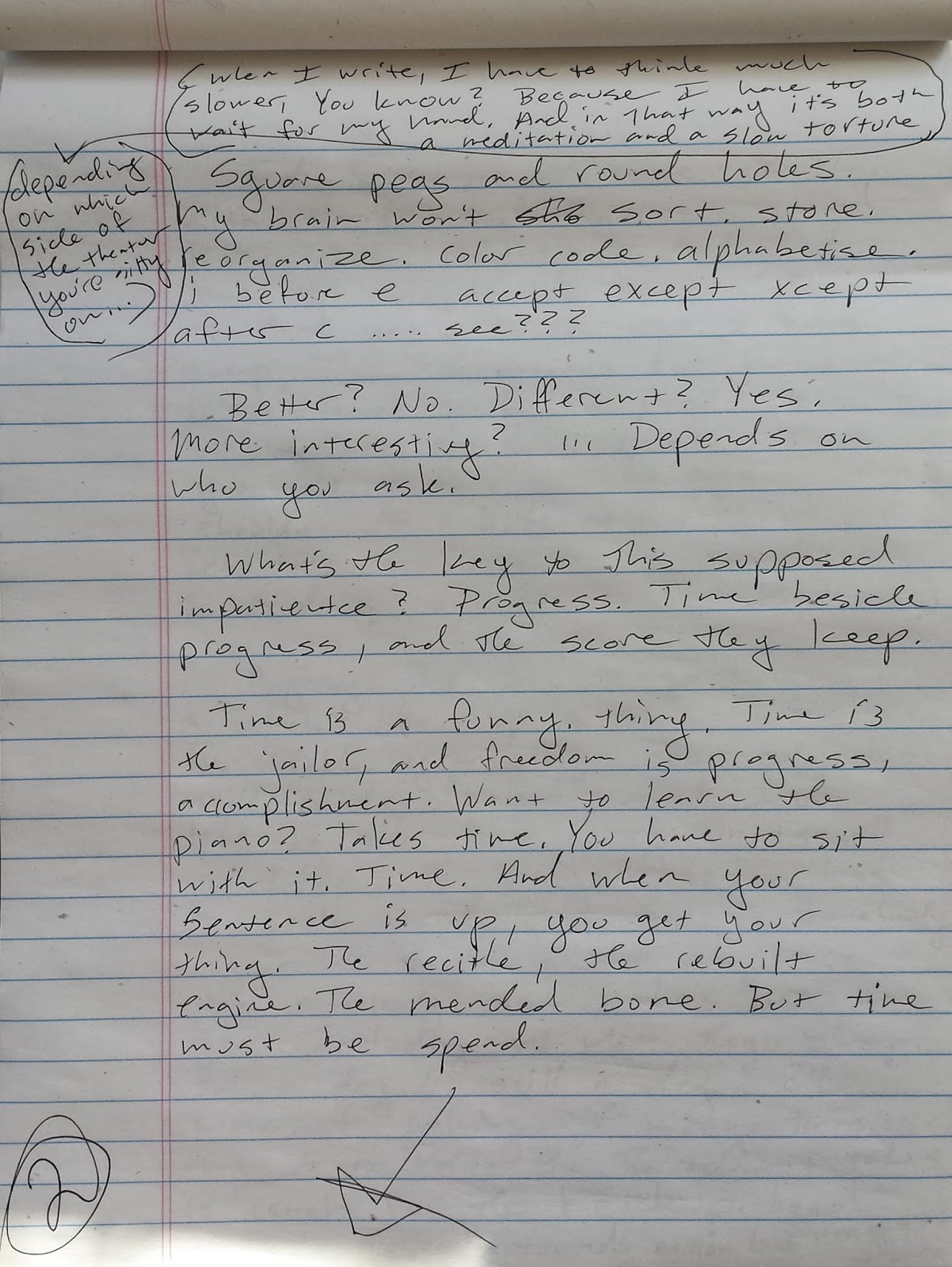 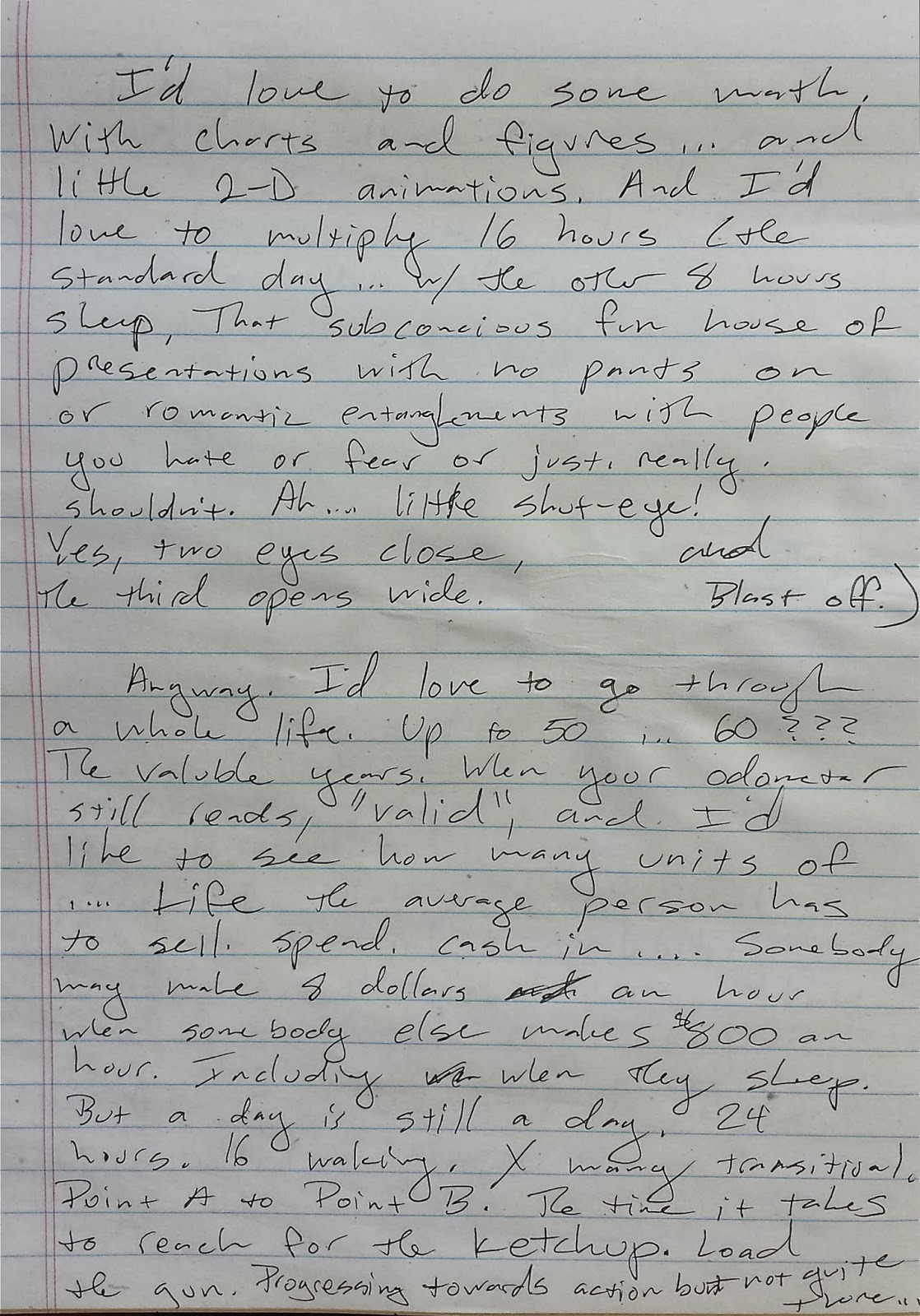 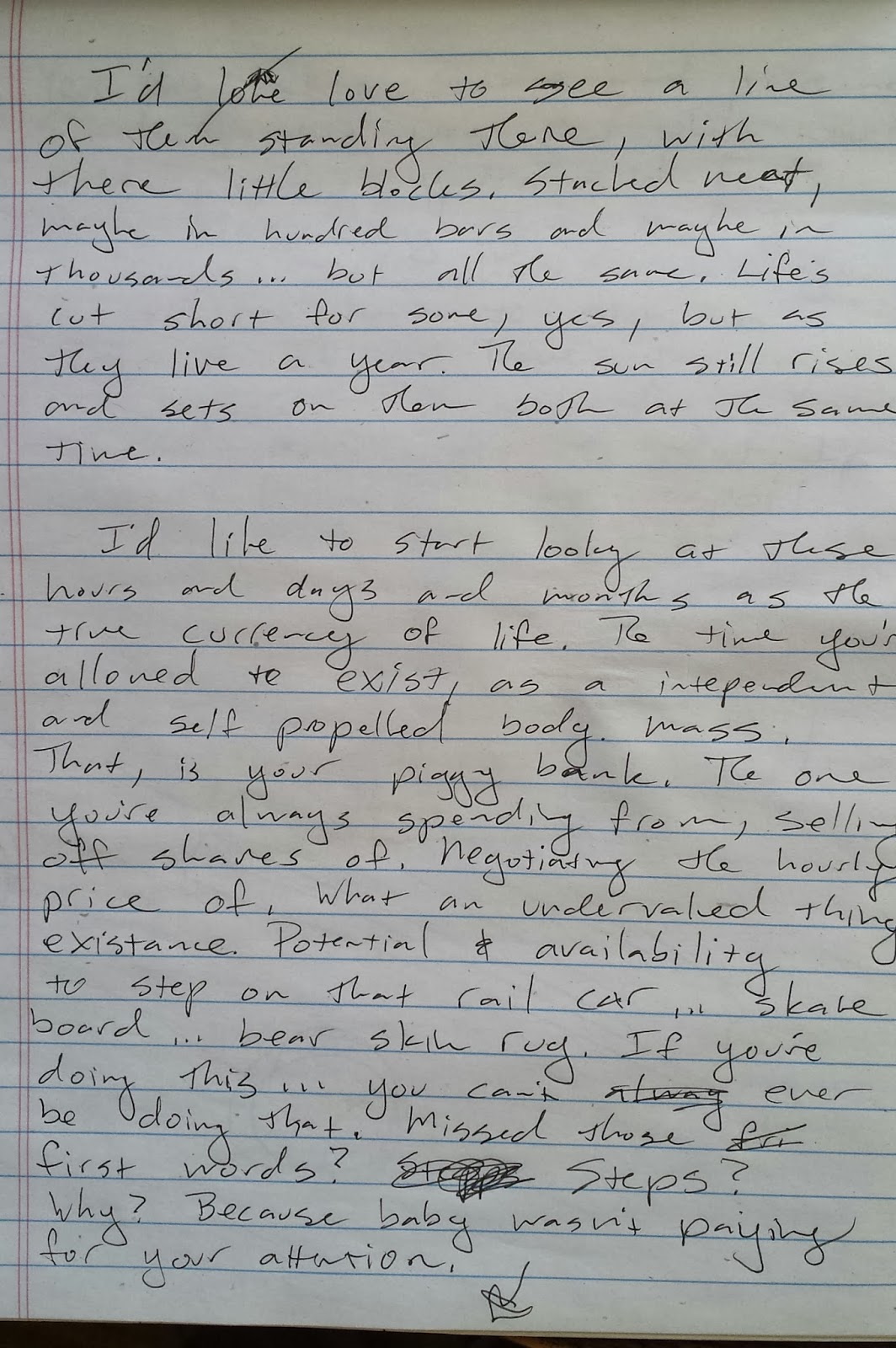 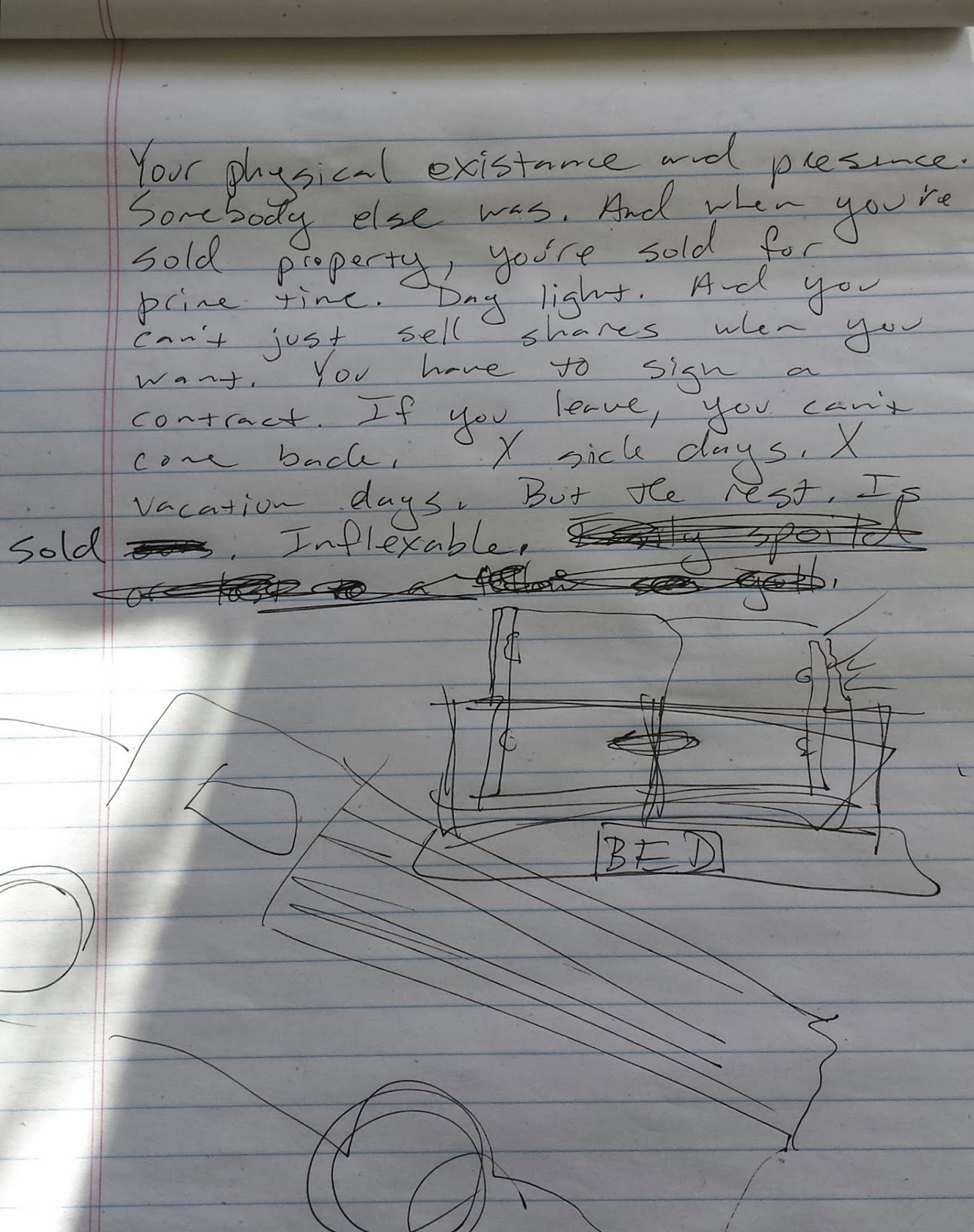 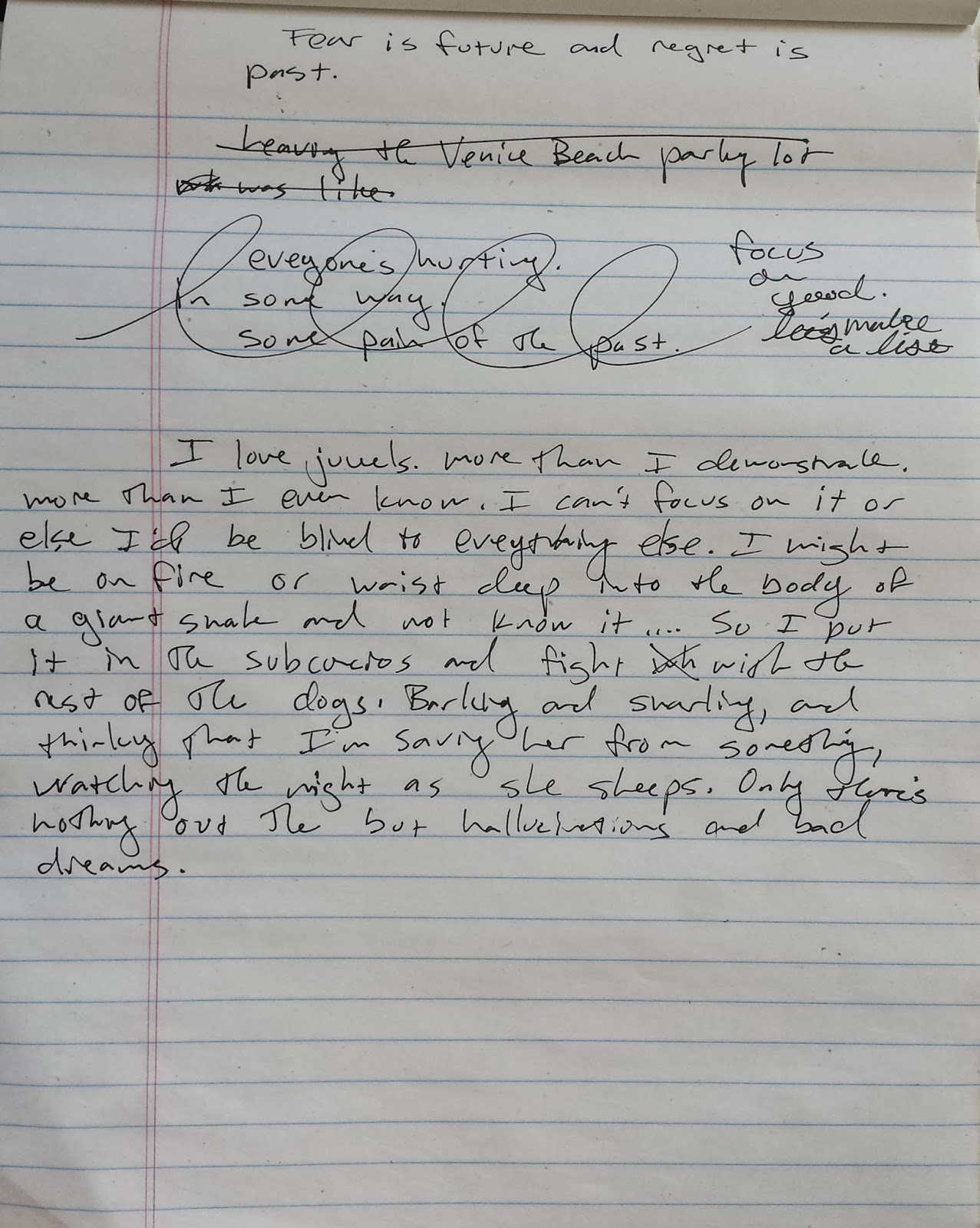 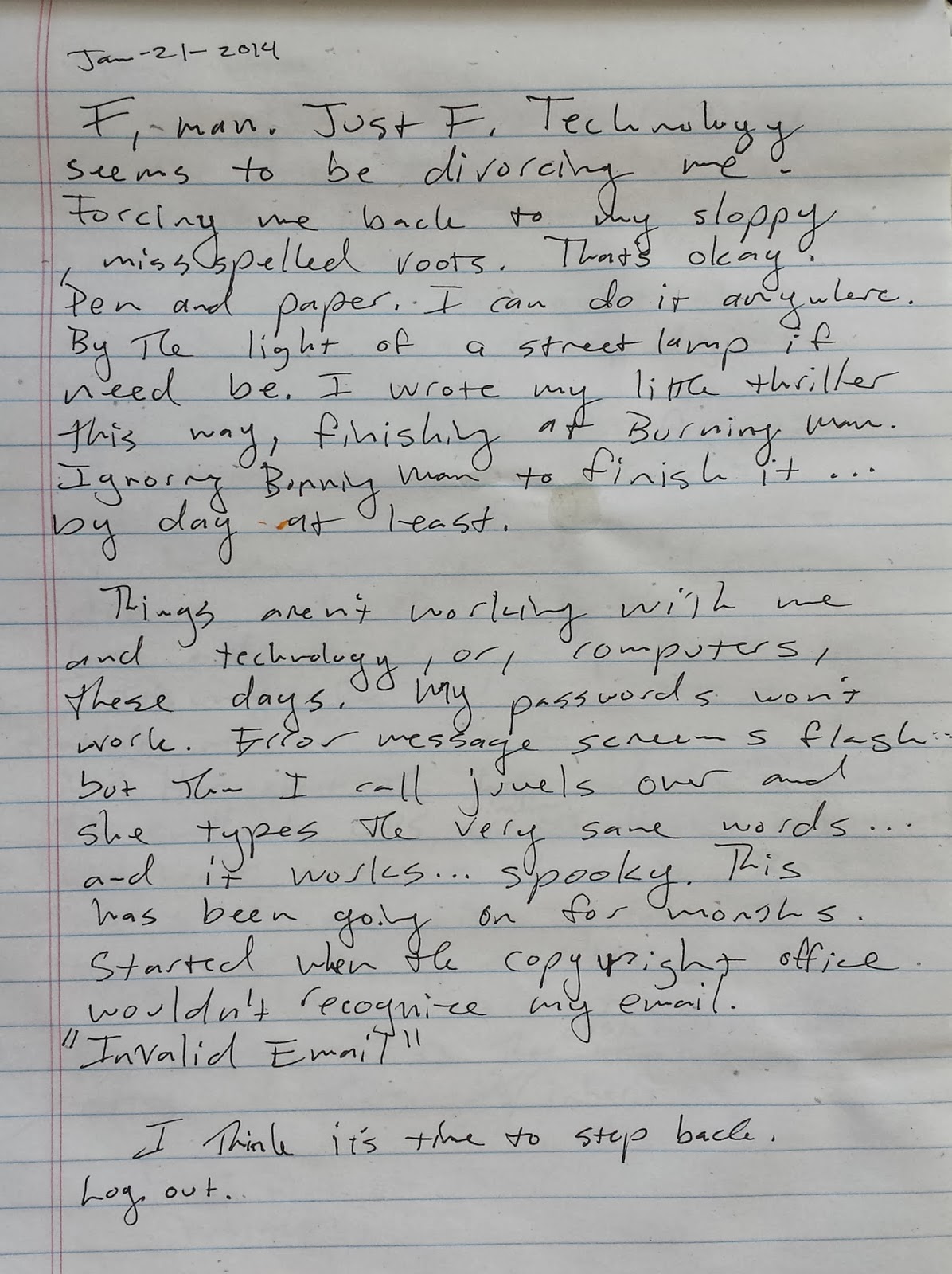 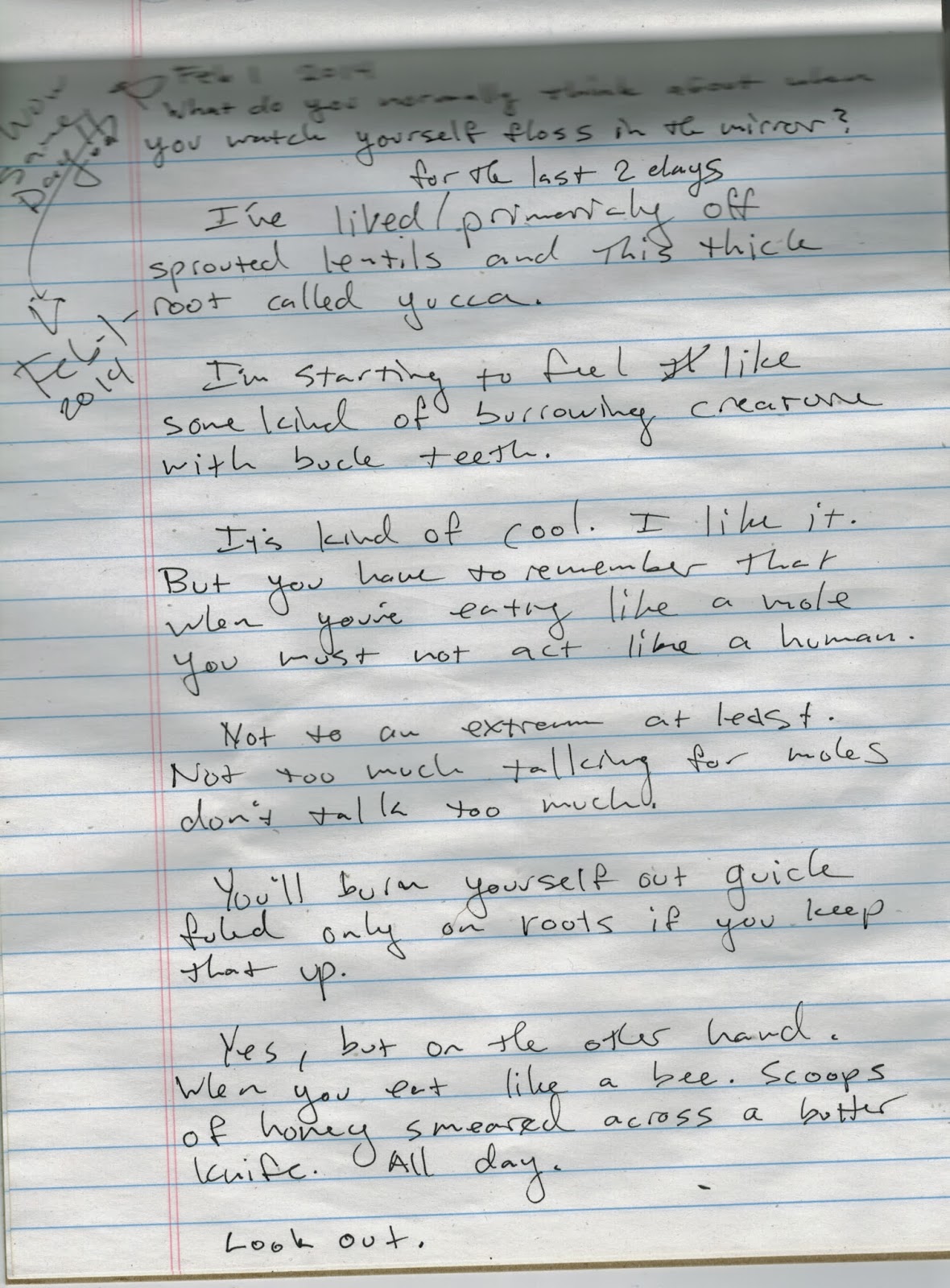 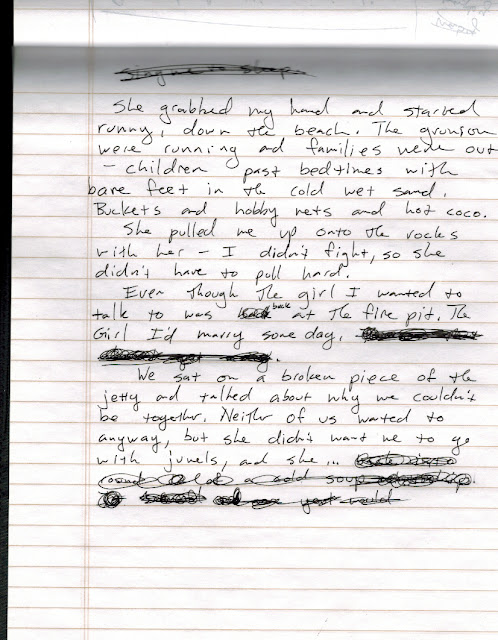 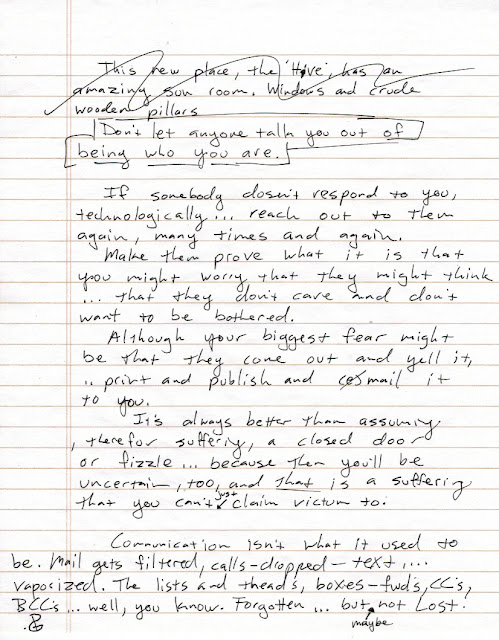 
Just found this in the blog edit page - a piece that I started and never finished - titled:

"update on peter's grand delusions of personal and spiritual growth. "


I've been thinking in pictures for the last few weeks - in chapters and quotation marks and pseudonyms and even sometimes in rhyme. This is the case most of the times, but it's controllable - I can flatten it with a few long emails explaining 'minimum opening orders' or customs declarations to this country or that .. that is to say, work, business, black and white, left brain - ready - go! But now there's this audio book playing, just a little bit louder, and I'm tuning in, and rolling my eyes, and trying to explain that there's just not time for that - it's a lot of work to write a book, no turning back.

Now. I asked for this. In fact, I paid for this to happen. I took needles in my wrists and arms and painfully, on the hard crowns of my feet.

I lied out, bare chested on a table, surrounded by the sounds of (chimes) and birdsong, so he could pour a cup of sea salt on my stomach and then start a smoldering fire atop the white sand.

The conversation that started all this went as such:

(Sometimes this elicits just a "Good. .. Rested." which isn't surprising since I'm laying in a small, dark room, serenaded with meditative Mandarin music. And at other times, my reply might sound like I'm reliving the final seconds in a near drowning beneath the ice. I've felt electrical vibrations, head to toe, and melting and warming sensations. But it wasn't always like that - and my expectations have changed a lot from the first time I was needled and thought things like, "I wonder how many needles they're going to use - more is more, you know, right? or Hold on .. something just twitched! Was that something happening ?? !!)

I think my response was of the former example, but then I went on, "Hey - you know how you asked me if there was anything in particular that I wanted to work on? I was thinking about that a little, and, well ... you know that feeling that you used to get when you were younger and experienced something new .. or maybe the way you felt the first time you traveled overseas, and even the smell of the air was something new and delicious?"

(he's used to questions that start like this from me, knowing there could be volumes more to come .. before I get to the point.)

He nods and smiles.

Random thought of the Day:

A few weeks ago - when we were down in the canyon at the hot springs for our weekAway, we were walking in the sun down the long fire road to the river crossing, and a small vermin of some kind - maybe a prairie dog - bolted across the path ahead of us.

He made it up the hill on the other side before we were even 40 feet from him, but as we passed by, I looked up in the direction he'd gone, wondering if I'd see a burrow of some sort, a place where he'd escaped to, but rather, there he was, standing on his hind legs in the shade of a mesquite.

He wanted to see us go by, out of sight and out of fear-range. I thought this was a very enlightened thing to do ... to watch his fears fade away on the horizon, from the comfortable place of observation, and not just bury his head in a dark hole and hide out in the paranoia of his own mind, from which place, he could envision that we were out there waiting for him. Forever.

A guru can come in any form .. if you're paying attention and realizing your humble place in things ; )

Random thought of the Day:

"The greatest miss-use of your own civil liberties is to deny another theirs."

This phrase sums up an encounter, well, a voyeuristic encounter that I once had back in Venice Beach, CA.

I was at Whole Foods, in the front patio section on the curb .. maybe eating a grass fed burger with no bun, and the gay rights people were out there, waving their sign and trying to get people to sign their petition and pledge money to Prop 8, same sex marriage.

This is a painful thing to watch for an introverted, over-thinking creature: rapid fire rejection. The awkwardness of it when the passersby are nice but unhelpful and the coldness of when they look right through you. The petitioner jumps around, actually dancing at times (to draw attention, I am told). It's repetitive and very humbling, the numbers game ...

And out walks a rather large black woman, pushing a cart. The young girl waves with both hands, one, still holding the clipboard, and says, "Do you want to help all citizens get their rights by supporting Prop 8?"

At first, I thought this woman was just going to be a walk-by. She takes a few more steps, now past the questioner, purses her lips, and then stops, unable to go by, and says, "No. I don't think they should be getting married. It's a sin, and that's not the way it's supposed to be."

I forget what the young girl said in response, probably whatever she was trained to say to defuse things like this, maybe, "Okay, you're entitled to your opinion." or something like that.

This woman had no obligation to fund and help the cause, but I had no doubt she'd actually vote against it when the time came. As she walked past me, I just ran the situation over in my head again and again, but I'm not great at quick responses all the time, and I wasn't going to chime in anyway, but the irony of it really stuck with me:

I felt like asking this woman, "Are you glad that slavery was abolished?"

"And what about women .." I might have asked, "do you think they should have the right to vote and hold jobs and wear pants?"

Yes - against all the people who tried to block your rights and freedom, others stood up and fought so you could finally be standing here, free to block the rights of others in this great democracy.


"The greatest miss-use of your own civil liberties is to deny another theirs."


Just a scrap of paper that fell out of my notebook .. I have thousands of these, starts with no endings: 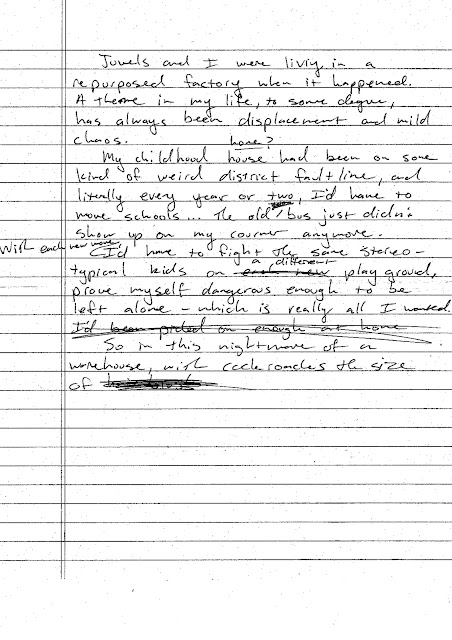 Written in the early AM of March 6th - just after leaving a party, brushing my teeth and crawling into the Crow's Nest: