Many of you are friends with us on Facebook and know that we've been taking it pretty easy after the holiday. Crashing ... really.

This was a great holiday for us, working direct to the people rather than pouring big orders for stores. Lots of little boxes went out, and we even had a holiday worker bee come to Flag on a live/ work trade ... with accommodations in the Winnie and lots of yummy organic food of course ; )

But something else happened tandem with the candle rush.

Chia, just playing in the backyard, hurt her leg ; (

This is where the "unexpected roommates" part comes in. Under the packing table (below), has  become a small goat stable. This was something that I improvised from old scrap and built in my pajamas. We're calling it the table stable. 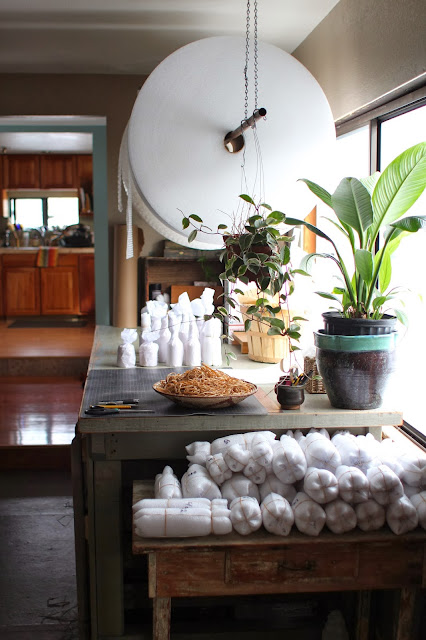 It happened on a Tuesday. It was a sunny day, unusually warm for this mountain town, and I'd been talking about how the girls needed to be bathed soon (this only happens every once in a blue moon, normally when we'd find ourselves with a greasy-grey-goat palm just after any extensive petting.) "Next sunny day," I said, "they're both getting showers, and they can dry in the sun."

I may have been in the middle of a sentence when I noticed the goats playing on the back deck, and in the sun, and I just walked out there and scooped chia up under one arm, parading her past juwels and our two helpers, "It's bath time!!"

"Oh, Chia !!! Poppy's giving you a bath !!" Juwels called from her candle station.

Ezzie cried outside, so I let her stroll in and hang out in the bathroom till her turn came about. She sniffed around, trying to eat our aloe plant and noticing herself in the mirror from across the sink. Juwels popped in to towel dry chia, and ezzie's turn came up. They actually love this treatment, making their little goat grunts and laying their heads on my knee as the warm water flows. And their coats have the most amazing shine and soft hand after.. (until they go rolling in the yard). 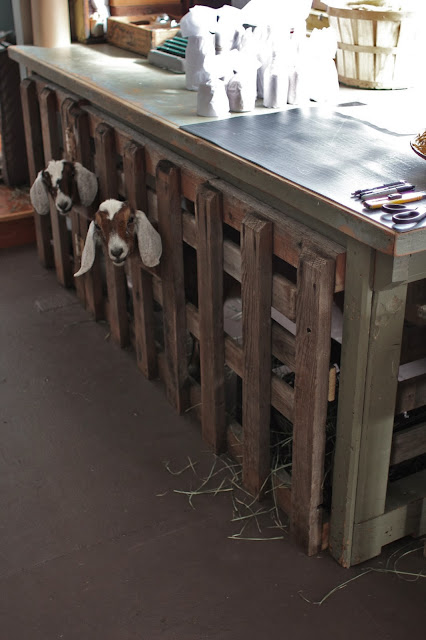 All fluffy and wagging their tails, the goats followed me through the Hive and back out into the sun, playful as ever.

Fast forward maybe 5 minutes, and I'm back in the pouring room, setting up a run of candles, and I notice the girls out in the yard, still playing. And I see that chia is holding her front left leg up off the ground.

This made her already stumpy front leg looked ever shorter all reeled up like that, and just kind of dangling, but her tail was still wagging. She jumped up onto a terrace, tossing her floppy ears around, and met ezzie's headbutt.

I ran out there and split the two of them up, carrying chia up onto the deck and placing her softly on three legs. "What's going on, chee chee?" I asked.

I looked under her hoof (it's actually a soft, rubber-like pad on the inside) but she didn't seem to have stepped on anything. Her shoulder looked odd and sunken, and I thought she might have dislocated her it (this happens to me all the time .. even while I sleep).

Massaging her shoulder, I pulled down on the leg gradually, keeping a close eye on her for any signs of discomfort. She was totally unfazed, trying to get back to her sister, but then she settled on chewing on the sleeve of my shirt when she realized I was serious about something. I pulled a bit harder, still trying to open up her socket, and even gave it a yank at one point, but nothing. It just coiled back up and dangled there ... 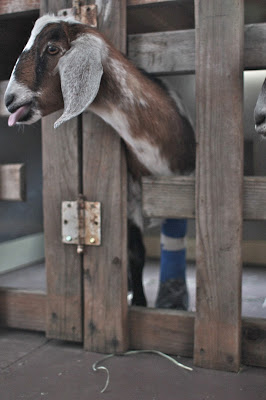 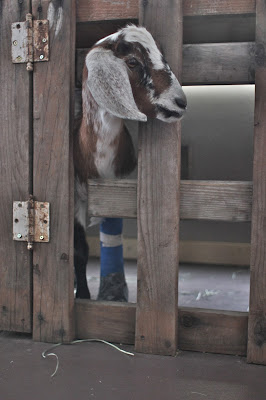 Juwels had noticed my hasty exit from the Hive and was in the window asking what was wrong. I told her I thought her shoulder was out and that I didn't think I could get it back in. "Call a Vet."

There was a part of me that wanted to panic, but her calm was contagious. She just reeled it up and kept trying to play with me. It was amazing.

I stayed with her as juwels called the local vets to see who could treat a goat, and a few minutes later, I carried her inside and got her to lay down by the empty wood stove. Again, ezzie screamed bloody murder outside because the two of them had been separated. We let her in, and started the task of trying to keep her mellow, and keep her from stepping on her sister, and we finally brought in the wire kennel and coaxed her in with a treat.

Ezzie's an interesting goat. She likes to be hugged real tight, it calms her. She zones out in the yard with blank eyes fixed, meditating, on nothing at all, and as it turns out, she really loves the sensory deprivation of a kennel, curling up within minutes and falling fast to sleep. This would turn out to be a very lucky break over the next month and a half. 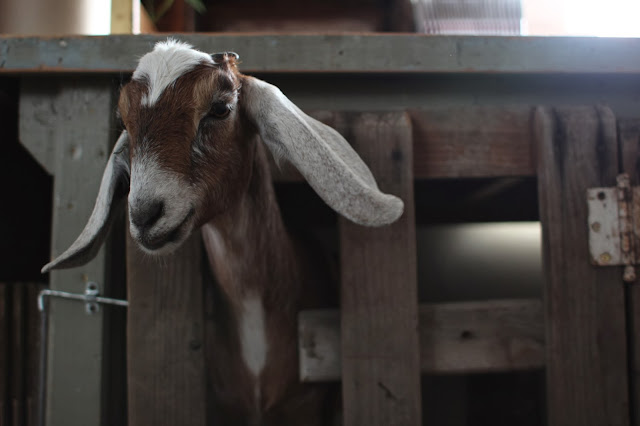 In the full rush of the holiday, with the etsy app bell going off like an egg timer (it goes "cha-ching" on the phone when we sell something), we all just crowded around our sweet little chee-chee, inspecting her scrawny leg and joints and telling her she'd be okay.

At this point, I realized that the hoof was pretty swollen, and I looked up what I could online. They talked about splints and casts, and after talking to one of the owners at the goat farm where we'd picked out our little babies, I decided that we should wrap and support the leg. Our friends at the farm said that goats were known to twist or sprain things, but with a few days and a little support bandages, they're normally right back to biz.

After getting off the phone with them, a part of me felt a little silly jumping straight to "Call the Vet", and I asked juwels to cancel our 3 o'clock appointment. I made her a splint out of a cut plastic pipe, cloth and foam wrap. She squirmed a little as I attached this cumbersome thing to her leg, much too big and awkward. And after seeing her try to walk with it, and recalling that she was staying off it just fine on her own, I went to work taking the thing off.

When I finally uncovered her leg, with the freshly washed fur all slicked down and damp, I picked her tiny hoof up and gave it a little kiss.

"Your poor little leg," I said.

She was lying down now with her back resting on the wall, and when I softly set her leg back down on the ground, I noticed a little kink just below the knee, in a place where the bone should have been straight and there shouldn't have been a kink.

Juwles had been hovering around as I went through the mess of the splint. And as I picked her leg back up, hoping that I'd just seen movement from the knee joint, that sick feeling in my stomach accompanying the sight of her bone moving in two independent pieces told me that it was broken. Broken?

Juwels didn't want to believe it. "What? How do you know?"

I held both parts of the bone in my hand and showed her the new joint, and chia, still, made no sign of pain. This helped, a lot ...  that she wasn't screaming, but it also added to the strangeness of the moment. Your leg is broken, in two, and you don't seem to know or care ...

Later, after resting on a pillow, covered in a blanket, she's demand to get up and hop along the floor so she could chew the bark off the firewood and trying to get around juwels in pursuit of some tasty cardboard boxes.


The vet had closed by the time all of this came about, and when we called the next day, we found that they were closed Wednesdays ...

She slept inside with us that night, on top of the comforter on the edge of the bed beside me. (lucky break they'd both just been bathed) She snored and snorted, and flopped her little head over my shoulder throughout the night. At one point, I awoke to see that she'd layed her chin directly over my heart, and with a few little grunts, let me know when she needed to get up (If they can help it, they'll never go to the bathroom laying down) and I'd carry her out into the yard and let her pee and do her berries in the snow. 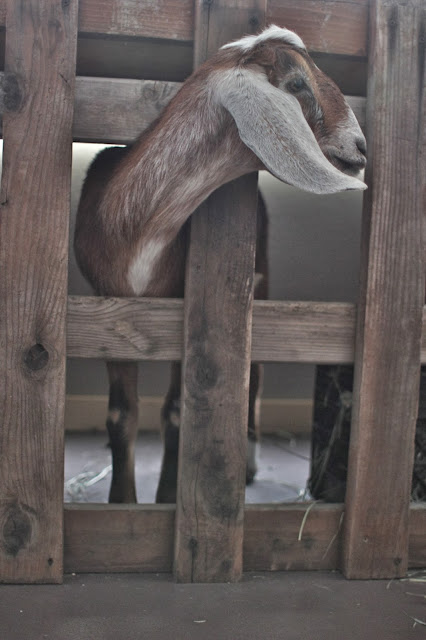 Ezzie, of course, had to stay inside, too, but she slept, very contently in her kennel in the entryway. She didn't have the same natural luck and talent at adapting to the indoor life like chia did, and ironically, turned out to be much higher maintenance than our hurt babe ... but she was along for the ride, come hell or high water. 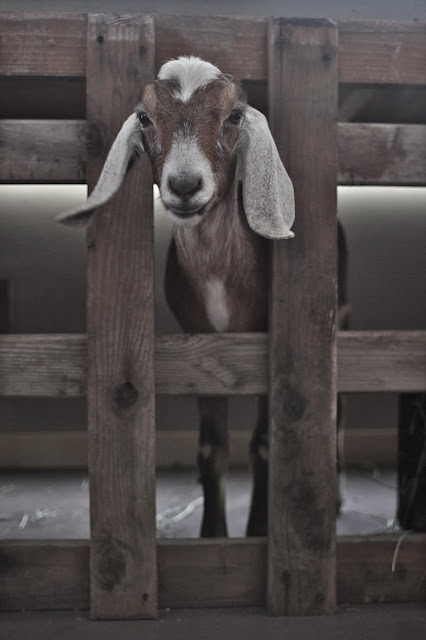 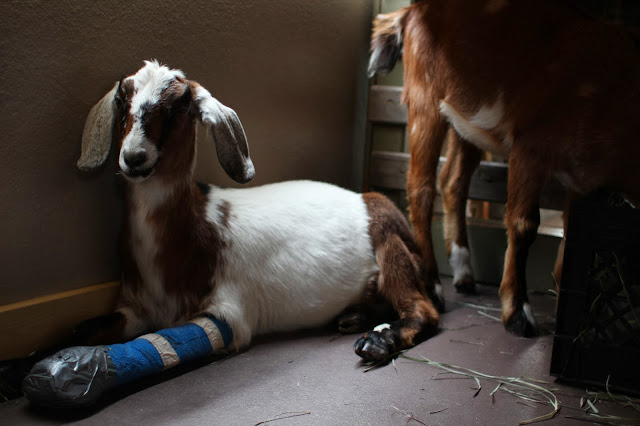 *********** This Blog is not done. Nowhere near Done. This would stretch out close to 2 months. The goats living in the house, us not sleeping a single night through since they had to go out 3 - 5 times directly intersecting our REM sleep. By the Vet's scale, Chia gained 10 pounds in three weeks. 50 - 60 pounds. Aching backs from carrying our sweet little (heavy) One. Dream-like wanderings at 2am and -7 degrees, waiting in the yard for the girls to "go potty" down in the yard .. btw, they're both fully potty trained at this point and go on command. Our eye bags grew ... then darkened, and my forearms, no joke, grew by 50% .. starting to deflate now .. back to the Peter Pan status, just the way I like it ; )

I started this over a month ago, but it's such an involved story that I always got called away on something else, and then I decided that I didn't want to talk about it till we were all on the other side. So ... we're all put back together and hiking now, and I thought if I posted this much of it, then I might get motivated (or coaxed ; - ) into finishing ... (there are actually two great blogs that go before this that I'm going to have post out of order, or I could take this down and post everything chronologically later ?? )