We're over here in the Winnie. They call these old motor homes "toasters", and on a day like today, we know why ... The little air purifier is on full blast, and the vents are all open, but the atmosphere is still heavy and warm.

I'm working on another post on a separate tab right now ... it's about a brief, yet much-needed, field trip we just took up the coast to a beautiful hideaway and farm town called Ojai, CA.

We brought a tent with the intention of camping, but the camp ground was full (and it's illegal to pitch a tent any where else) so the night's slumber spot was uncertain from the get go.

We avoided the cops as they chased about a dozen soakers off the private land which hosts the hot springs and inadvertently breached the gate of a ranch (which we mistook for a state park) and hid in the bushes smiling and breathless as owners returned home and drove within inches of our leafy guise.

We camped amongst boulders after trying unsuccessfully to fall asleep in one of the shallow hot springs, and firework displays of shooting stars streaked the sky all night.

It was a long and fruitful day - especially for one which started at dusk 80 miles south that same night. The next day, a bit delirious from lack of sleep, we trekked and waded the river at length and surprised a married couple while they were... errr, "uniting" on a sand bar in the middle of the river ... whooops : )

We fell asleep on a quilt under the tall trees and became so still and grounded that a lizard ran across the top of Juwels' sleeping head like a ski jump (true story). We bottled spring water, became brunch for tiny nibbling black flies, and I slipped and slid down a slope, slick and muddied by the spray of a waterfall. To say it was perfect would be mathematical and flat, it was ... BzzZZzzzTt !!

Anyway, the post I was working on was too long and garrulous, I think. And we're in the midst of a marathon right now ... one we'll be letting all of you in on soon ... so I may not be able finish the novel post just yet. And it's pushing the limits of sitcom blog-length presentation, so maybe nobody would find time to read it in the first place ...

But I did want to post a song we've been listening to a lot lately (it's actually the reason I opened this new blog window) ... the tune's a Johnny Cash ballad, and I think everyone would do well to listen to it and smile.

I'll attach the song below.


p.s. (we'll post an almond milk recipe soon ... we forgot to soak them last night, so we made hemp milk instead this morning. ;)

Here's a few pics from the day : 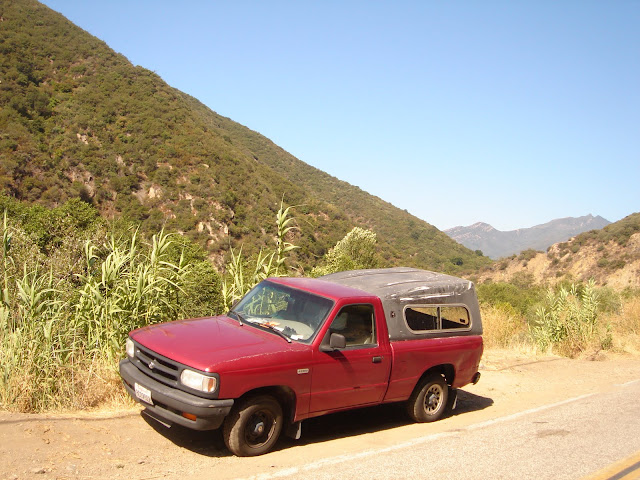 This is our support vehicle. We call her "the trucka" (I think our Hispanic mechanic called it that one day, and we found it so cute that "the trucka" has become her name.) We found that camper shell in the alley ... just a day or two after having the conversation that we needed to buy a taller one. This little truck has been so good to us ... even when we've been too broke to return the favor. Viva La Trucka !!!

It's a funny thing, people always assume that the Winnie is our only car, even friends that we pick up from the crowded curb at the airport say, "Where's the Winnie??" Thankfully, we have this little trucka to zip around the Whole Foods parking lot, and climb the hills to the springs. She's got 160,000 miles on her meter, and up until just a week ago, her tires were so bald and dangerous, that before I drove anywhere, I'd call my mom just to let her know I love her. But she drives like a water bed now. She's the little engine that could. 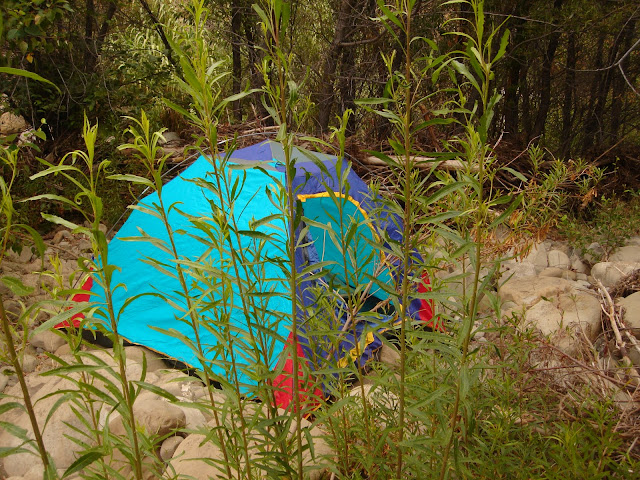 Our tiny tent wasn't exactly camouflaged in our secret camp. We decided to sleep behind the trees which border the springs, and as you can see from the picture below, there wasn't a whole lot of soft open ground, in fact, this spot where we ended up popping the tent was the only partial clearing.

At three am, after soaking to the point of delirium, we went back up to the truck and filled our arms with pillows and blankets (Juwels brought them ALL) and then we awkwardly passed back through the hot pools, which were still crowded with people singing choir style tunes of freedom and love.

They didn't seem to notice, and after walking through the spider webs and past the trees, we found a tiny patch of sand between the boulders, (about three feet wide and six feet long ... the same size as our little crow's nest bed in the Winnie) and popped our tent and said goodnight. 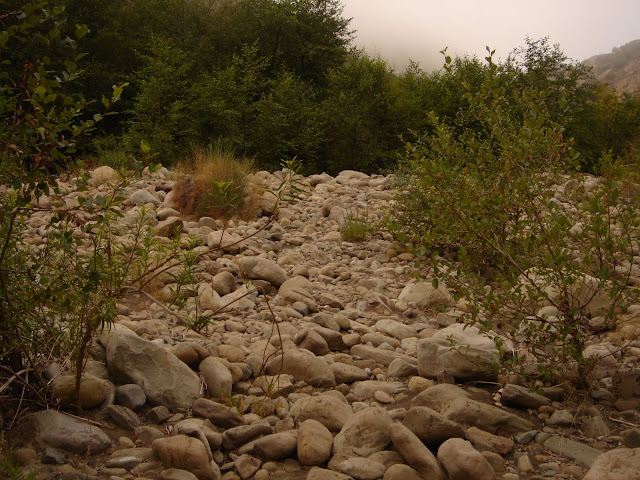 I took this picture three hours and twenty minutes later, after thinking I heard a walkie talkie and springing from bed. I tried without much luck to get Juwels out of bed.

I wanted to break down camp and cover our tracks before any nosy ranger came around with his ticket book. I had to literally pack the sheets up from Juwels' sleeping body. It was only after I talked about pulling the tent poles while she was still inside that she was pulled from her slumber. But just a few short minutes later, we were back in the hot water pools : ) 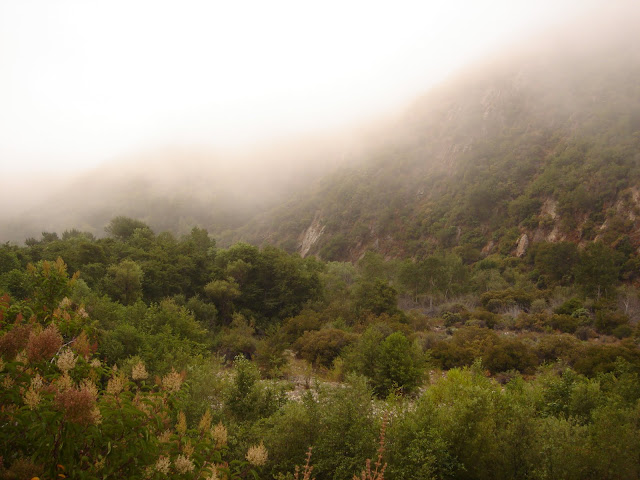 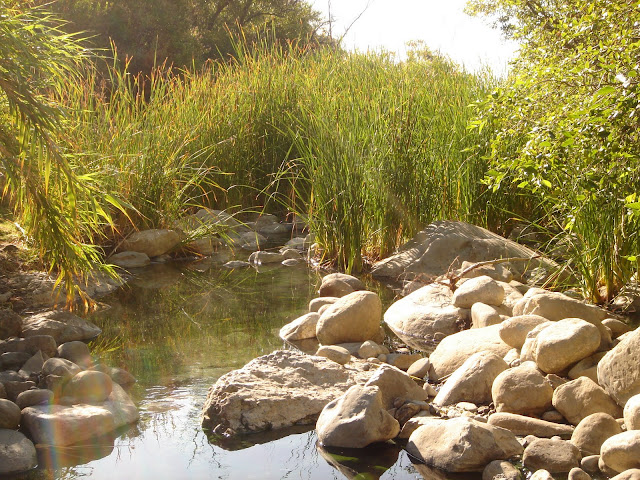 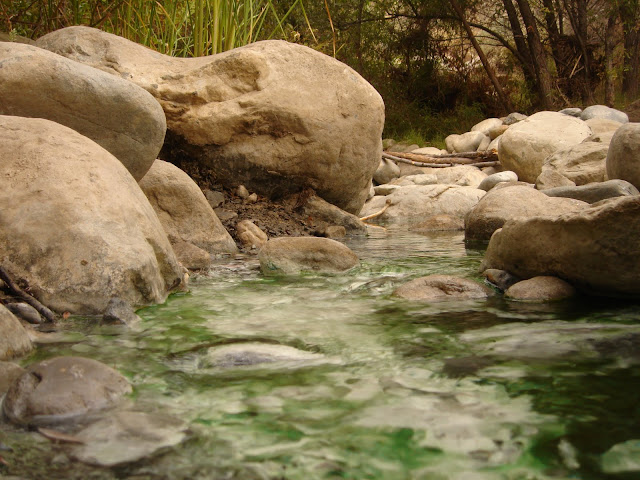 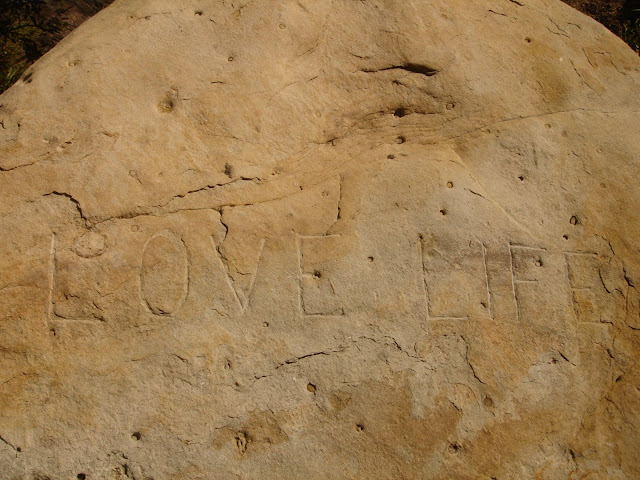 This is Ojai's version of graffiti. 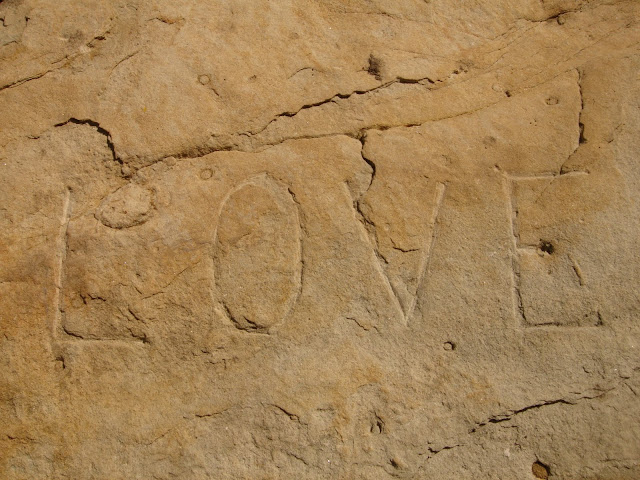 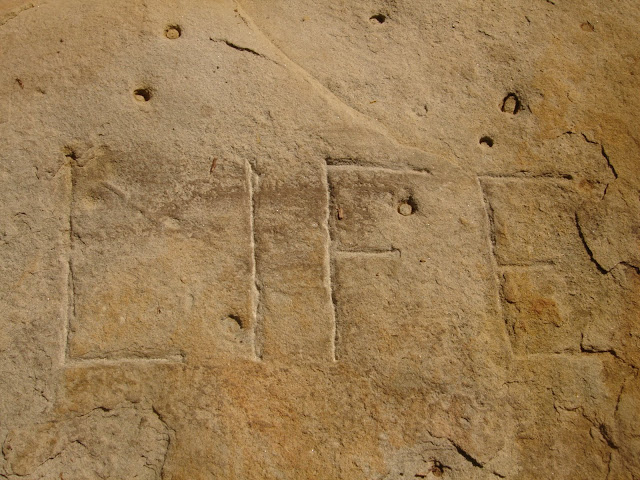 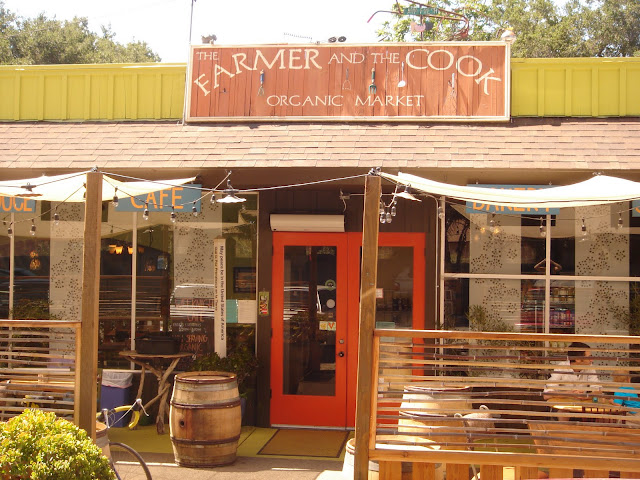 Farmer and the Cook is a great little coOp with bins of loose leaf tea, herbs, delicious smoothies, an organic buffet bar, and a Wednesday special of savory nut loaf that makes me snarl and roar a little.

Love this place - pure and simple at it's finest. Most of their produce is grown on their farm ... just a few miles from the kitchen. How's that for "buy local"? We've literally intercepted water melons and heirloom tomatoes from farmer Steve's hands as he's unloading the truck. 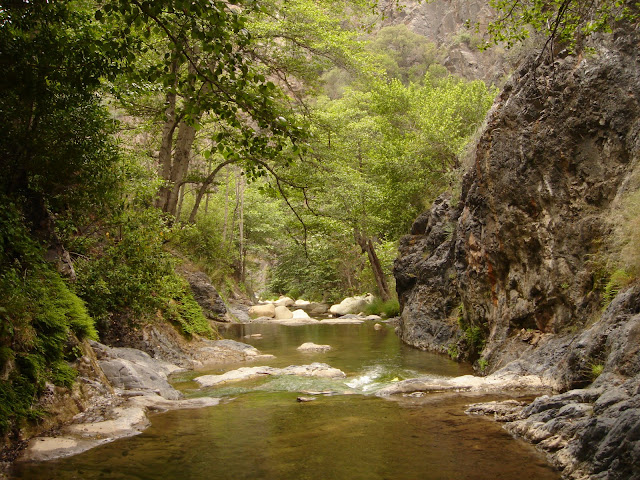 And off to the river we go. 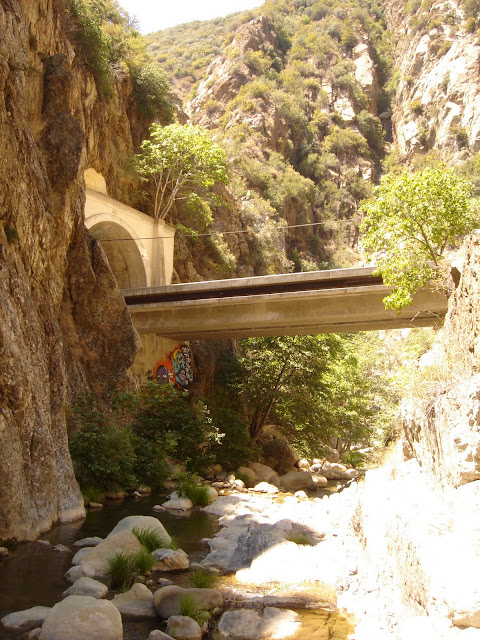 We traversed the rocks and splashed about in search of a place where Juwels could work on her tan lines. Notice she won't be appearing in any swimming pics to come ... she's usually the one behind the lens anyway : ) 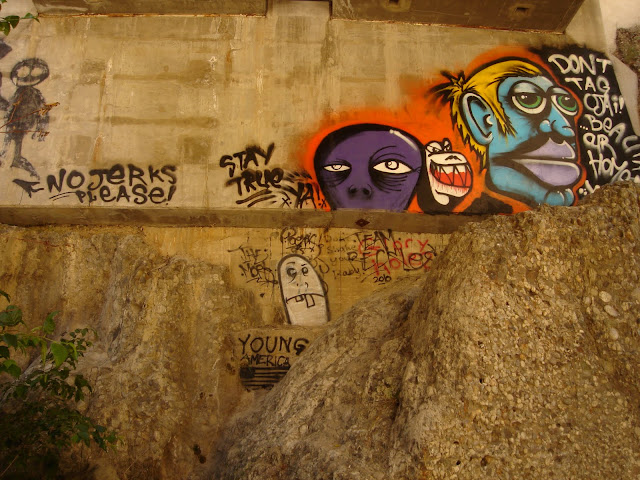 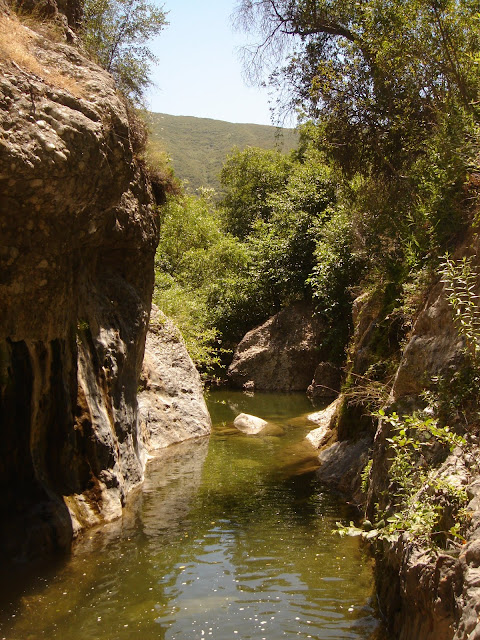 And beyond the bridge we found a place where a beaver damn caused the water to swell up the rock walls. It was deep, cold, and secluded. Loved it. 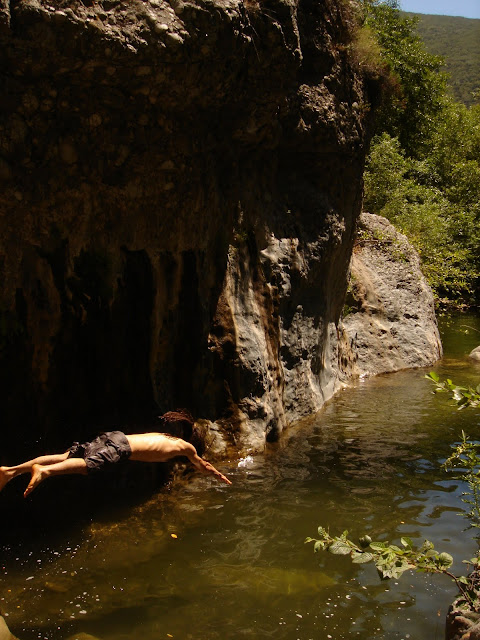 Leap frog anyone?
I've even got the inverted feet and everything !! 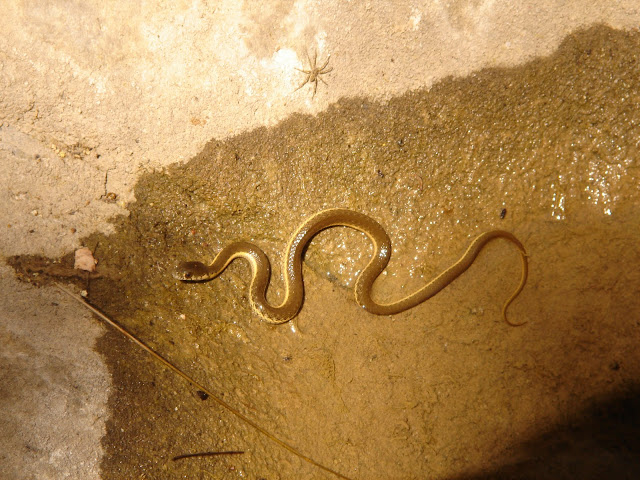 Juwels chased this little snake onto the rock and then scooped it up ... it hissed and she dropped it back in the water. "Yeeee .. Heee HEEeee"

She's crazy. How's the spider on the rock ... didn't even see him there until now. They're a cute pair. 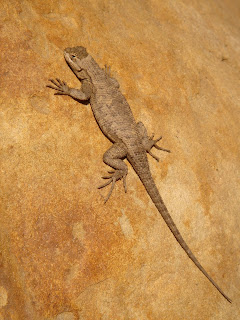 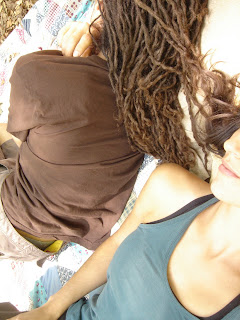 This wasn't the lizard who free-styled it off Juwels' head as we slept, but it could have been his brother. 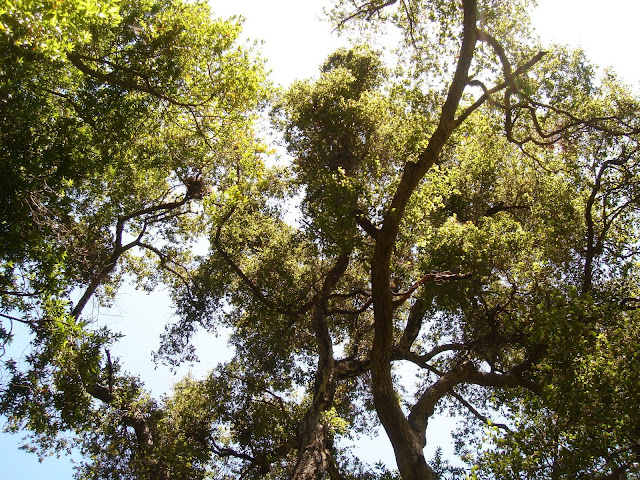 Our view from the blanket. 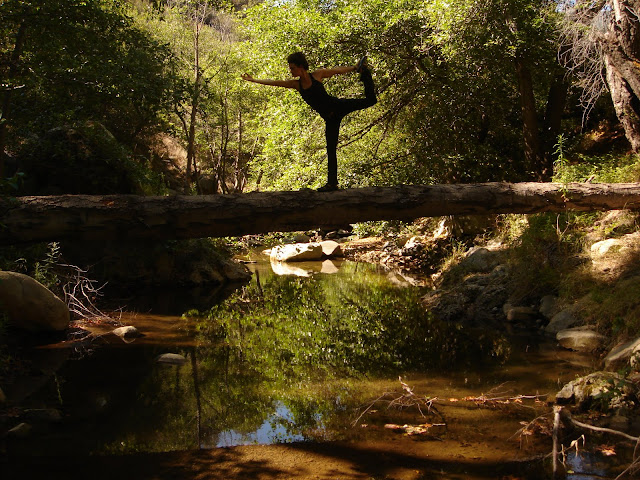 She really wanted to do a hand stand on the log, but I talked her out of it ... 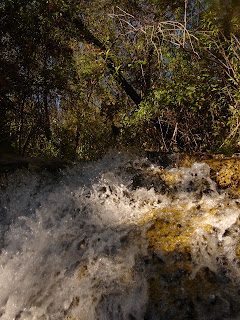 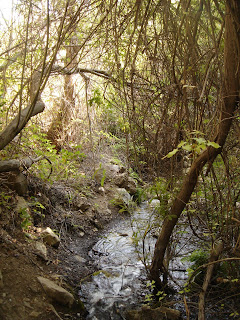 And off to our mountain spring. As you can see from the picture, there's really not much of a trail ... footing through the water is extra heavy on the way down the hill with a back pack strapped with 40 pounds of water and gallon jugs in each hand. Some girls want diamonds, some want fresh water. I'll follow her anywhere : ) 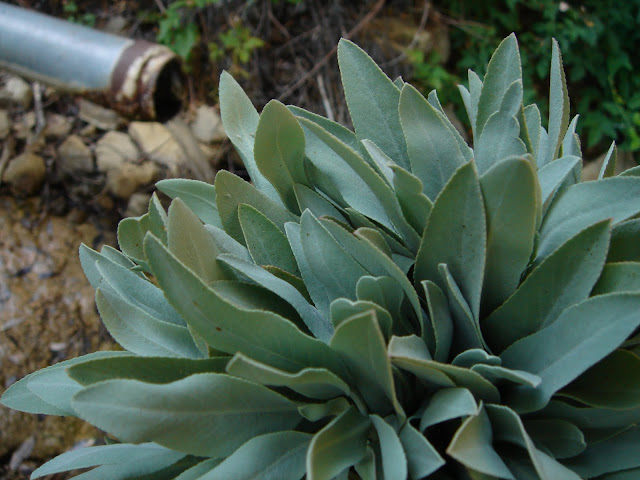 Here's a bundle of white sage which Juwels harvested on the way up ... great for tea or dried as incense. 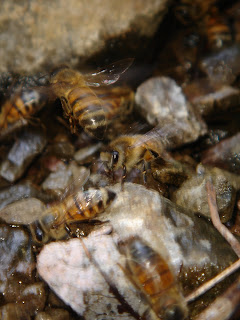 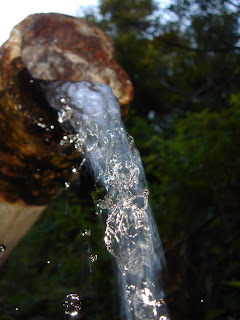 It's interesting that there's water running down this entire hill, but the bees choose the source of the spring to drink. Juwels says they feel the energy, and want to get the water at it's most alive and invigorating form. You should see their little butts pumping up and down as they drink, so cute. We shared water without anyone stepping on anyone's toes. 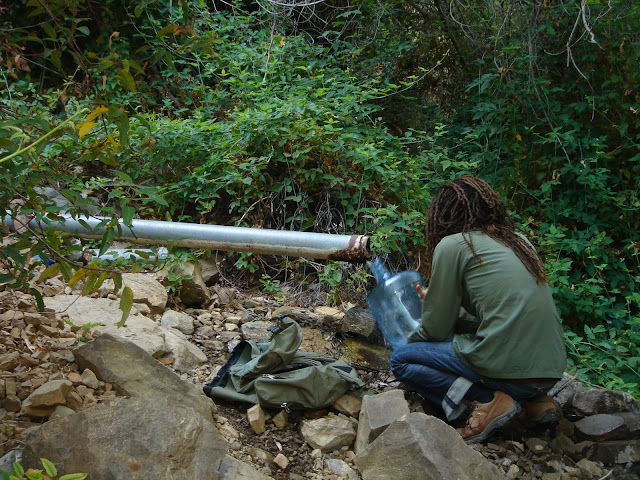 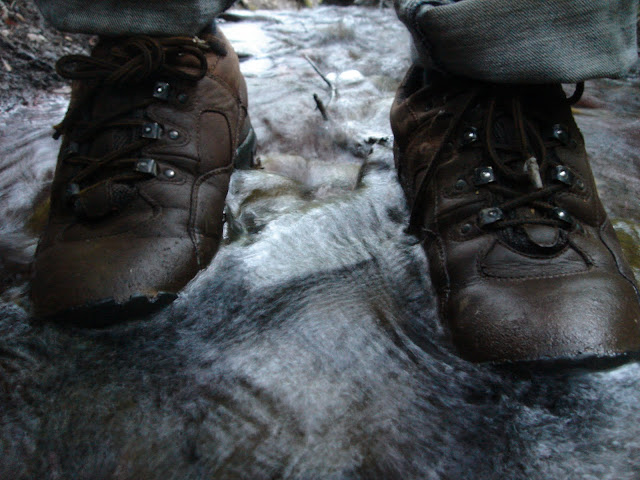 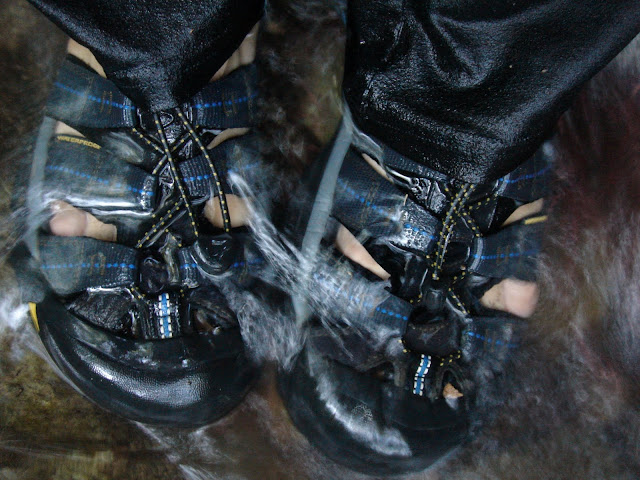 We left town roughly the same time that we had set sail the day before, and even though only 24 hours had passed in the mix, it felt like we'd been away at summer camp and had all sorts of new stories to tell. Don't you just love it when that happens ?? !! : )

Until next time, your friends,