Juwels had been pecking at me a lot - about moving back out into the forest. We've been busy. With business. And busy trying to live our lives in the other moments: hiking in Sedona, picking fresh wild mushrooms after the rain, swimming, sunning, and chasing each other around the Winnie.

So we hadn't had any time to ready the Vessel - you can't just drive the Winnie off after a long winter season of hibernation. For one, she was up on cinder blocks, her feet hovering off the ground on some sides. We had the wooden "skirting" around the bottom of the frame to keep the cold wind from whipping around under there and freezing our tanks - the tank the shower drains into, and the other one that holds the .. well ... you know .. but they both still froze solid before we got the skirting up last year - good times ; )

But finally I gave in - checked the fluids, fixed the gas leaks, tuned & adjusted, banged and bumped around under there - cursing and gritting and popping up into the cab to have juwels flush things out of my eyes (see why I was putting it off), but with the ol' girl purring and growling and puttering along, I did feel proud and struck with the thought that we needed to drive by moonlight and climb the hills on the outskirts of town, so we did. 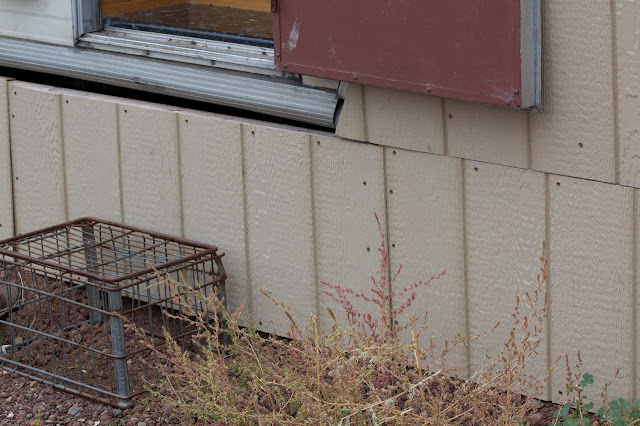 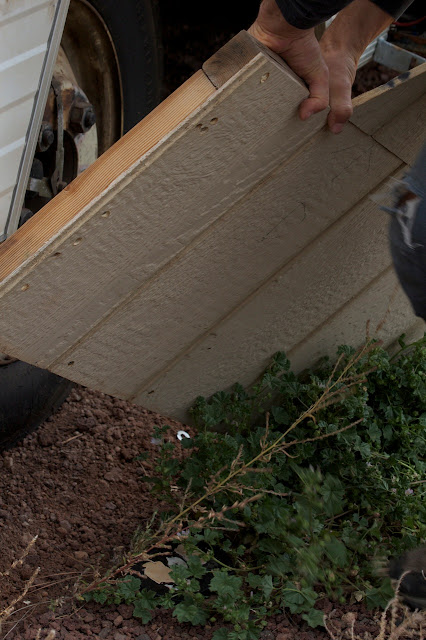 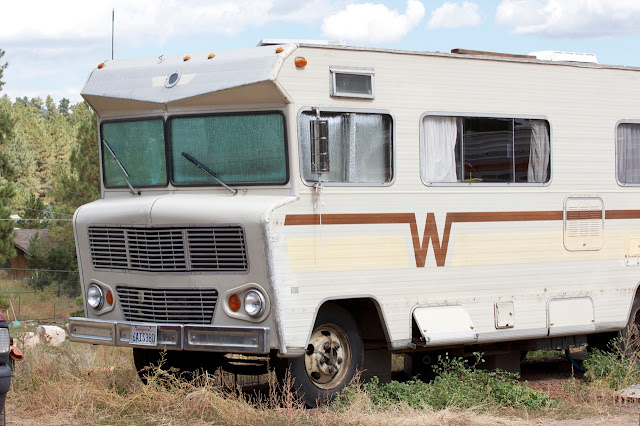 Juwels thumped around inside the Winnie all day as I monkey-wrenched under the grill. She said she was just straightening up, but when she called me inside to help take the toilet apart for a detailing .. I knew she was in full-on Cinderella mode ; ) 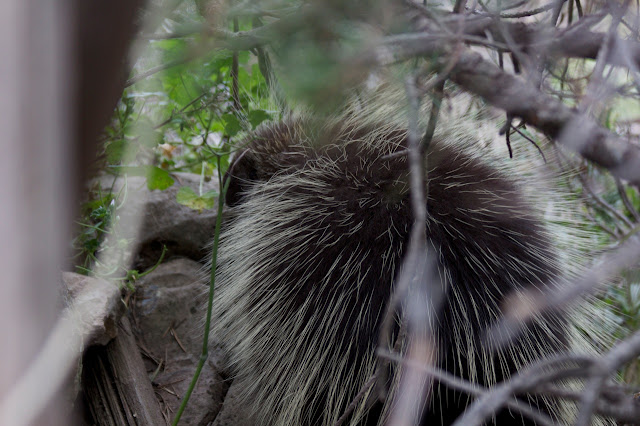 Our neighbor called us over to see this little porky. He was stacking firewood for the season when this lethargic pin cushion wobbled out. I've almost stepped on a couple of these coming home late night .. fingers crossed that I continue to spot them first ; ) 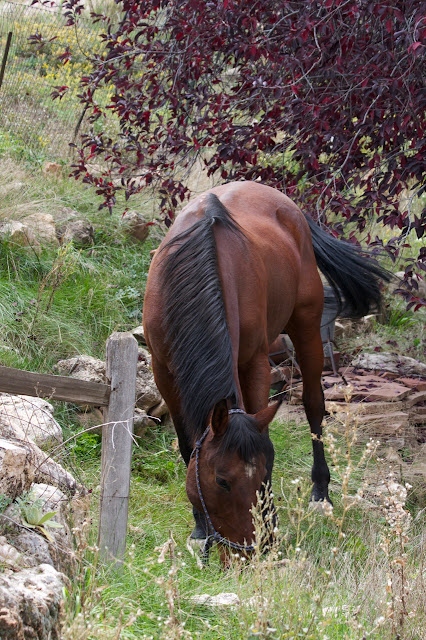 And since we were going to be out in the yard for a while, I walked over and snuck Lily out of her pen to enjoy the end of the season's green grass. She worked this area, like a good girl, for hours without wandering off like she likes to do at times ; ) She goes through a lot of grass, quickly, and just standing near her, the air smells like a juice bar w/ wheat grass and chlorophyl thick in the air. Look at that beautiful sleek summer coat. She's much shaggier these cold days .. much softer too ': ) 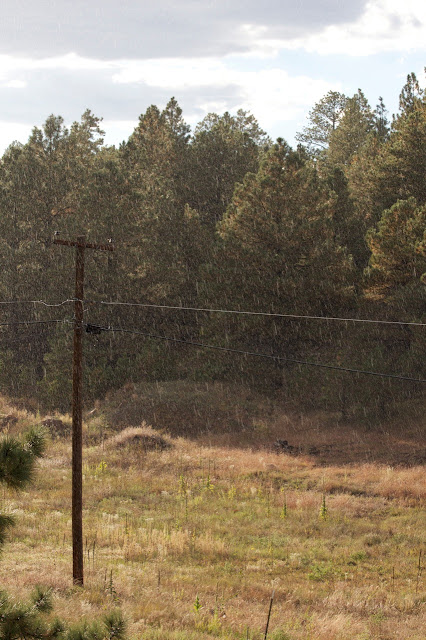 We got some rain. 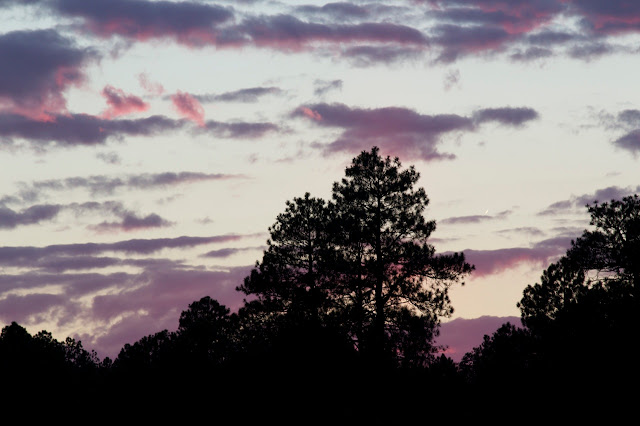 ... still putting everything back together. 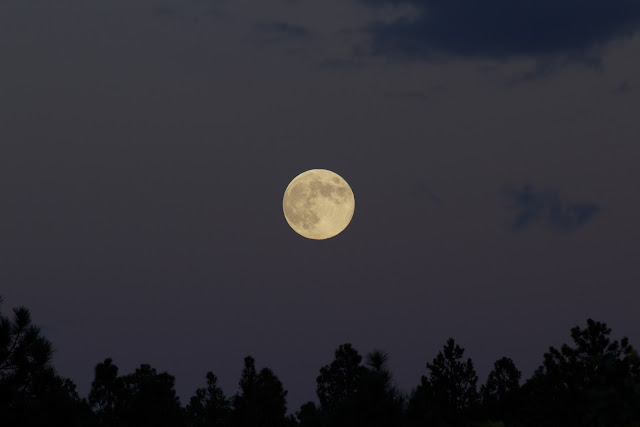 It was dark by the time we finally hit the road, and luckily all the lights on the instrument panel fired up. I felt like the pilot of a large and nosy plane. After filling the tank (not cheap) we buzzed along the dark, pine-lined roads with the skylights open and the cold wind breathing through the cabin.

Juwels giggled and danced around the winnie, occasionally sliding from the back room across the bamboo floors in thick wool socks as I'd point the nose down a hill or hit the breaks. "Weee hee-heee-hee !!" We had pulled the chewed-up passenger seat out during our renovation, so during trips juwels just kind of floats around while I play captain. She reads on the back couch, showers, naps, but mostly hangs around on the bench seat behind me, with her chin propped up on my shoulder, keeping an eye on the road and squealing in my ear about passing skunks and squirrels up ahead. Not the safest setup, but before we take our next long trip .. we'll get her a helmet .. or .. a chair ; )

When we'd gone far enough, and the engine was burning hot, we turned back towards town. We hit the forest pull-off, exiting the smooth asphalt for the rocky road and national forest. I had half-heartedly protested going out into the forest earlier that day when the preps had ran past dinner time, because finding a parking spot, the parking spot, in the forest at night wouldn't be easy, but juwels said that it was a full moon and that we -had- to go out, tonight, so that was that.

It felt good in the woods that night, and the moon was so resplendent that it seemed like I could click off head lights and still see the winding dirt road. Juwels had requested Patrick Watson's "Adventures in your own Backyard" once we'd hit the dirt, and with the perfect soundtrack, through the indie film we drove, deeper and deeper. The first couple miles of forest are 'no camping' zones, so all was dark in the shadows of the trees, but past that point, fires and large camps cropped up left and right.

"This is like Robin Hood," juwels squealed, stamping her feet on the ground so loud that I though we were dragging something. 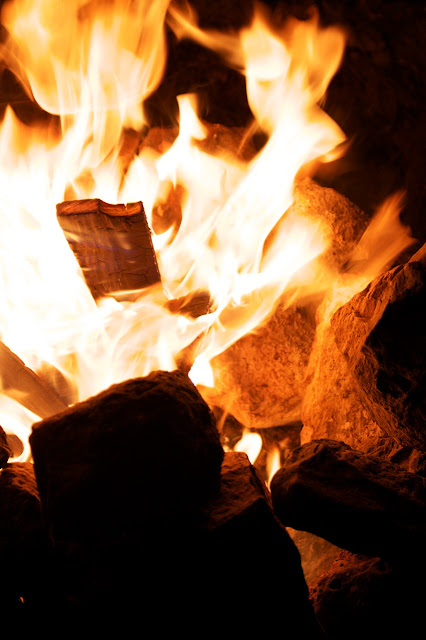 We were going to pull off at our old spot, but luckily we missed it and were forced to venture farther into the forest, past the hunter's camps. "A little father .. a little farther .." juwels lulled, now sitting  directly beside me on the wide engine cover and old chest.

Finally, I just pulled down a turn to the right.

"Where are you going?"

"Just checking it out .. exploring."

She liked the sound of that, but I knew there probably wouldn't be a good place to turn around once we headed down the road, so we'd be sleeping somewhere down there. It's an interesting thing, driving your house down these roads. What starts out as flat-packed roads can quickly turn to sand or potholes, but I just accepted that we might be sleeping in the middle of the dirt road that night and enjoyed the snaking blind turns and humps and the red dust cloud in my tail lights. It kind of felt like one of those Knotts Berry Farm tram rides with fog machines and creatures ducking out of sight.

We had gone so far that juwels was actually prompting a pull-off here or there, but I had a picture in my mind: a nice open field with plenty of moonlight and the morning sun on our solar panel, but then, almost involuntarily, I jerked the wheel to the left and threaded the needle between tightly cropped trees, over a small berm, and settled just ahead of a large stump and tiny wild rose bushes.

"That's fine," I said, with the engine already turned off.

"But the bed's sloped back .. so all the blood will be rushing to our heads."

I fired the engine, and juwels ran back to the bathroom window to watch my tail-end for trees .. we used to do this each night in Venice Beach when we'd parallel park between BMW's for the night's sleep. She's a good little spotter .. I did have to break her of her habit of yelling, "ST-O-P!!!!" like I was about to roll off a cliff ; ) She can be little dramatic, so we came up with a cute noise that she'd make, progressively, as a backed into a potential insurance nightmare ; )


I stepped out of the captain's seat and met juwels mid-winnie and we hugged and danced across the bamboos ; ) We tangled up on the couch and split the curtains open to see the night sky. There were long moon shadows laying across the grassy fields from the tall ponderosa pines, and sliding the window open we were met with the vanilla pine-sap smell that makes this town smell good enough to eat. And after watching the man on the moon for a few minutes, I fell under the urge head outside and and dig - find the perfect place for a fire pit, collect the rocks, pine cones and kindling, and let there be light ; )

I quickly realized that we didn't have a shovel and gouged at the earth with a large stick. It was easy going at first, and this sparked something in me, buried ancestral grunting, the grit of fine composted silt on my lips and brow, and the thought that I should light this glorious fire by banging rocks or drill-spinning sticks and blowing my own breath into it .. but soon, once I hit the place where the piny compost and soft dirt ended and the tight packed stuff began, it also produced a softening of my palm and the beginnings of a bruise. I thought better of it, and walked back to the open winnie door to find juwels lighting candles, steeping tea and cutting up butter nut squash.

"You want the gloves?" she guessed.

She could only find the left one - which wasn't my driving hand, so she gave me a dirty pair of black socks to put on my other hand .. such was the shrinking of whatever was left of the caveman in me. She insisted that I wear the headlamp this time, so back I went in this strange LED light, gouging away again, and then it was done: perfect rocks circling, stuffed with pine needles and cones and topped with sticks and branches.

The rest of the night was just perfect in our toasty little winnie - we lapped up spoonfuls of baked squash with maple syrup, coconut oil, and sea salt, and juwles even baked a savory pan of potatoes with onions and garlic that brought the caveman back and growling.

Around the campfire, we sipped from a thermos of hot green tea and listened to the cracking pine and oak, and just before we were going to head in for bed, we heard a single coyote sing in the distance, she sounded small and scrappy, but she just may have been the leader because next, the whole pack lit up the night with sound. It was invigorating, and we couldn't help but howl along with them for a time. 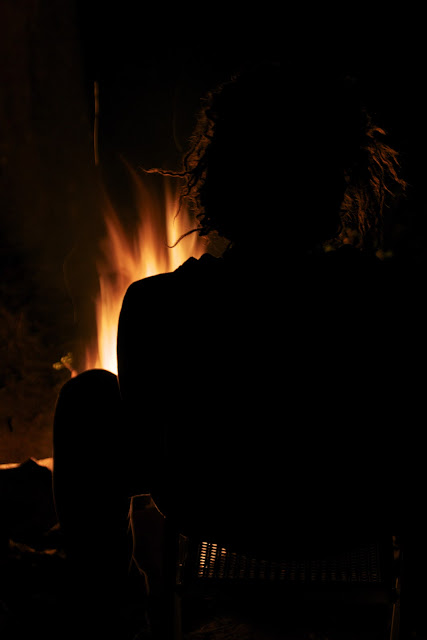 We didn't move from that spot for a long while, and it became home. On the long walk back to town the next morning (where the truck was parked) we realized that we had happened upon one of the very best spots to plant our roots ; ) 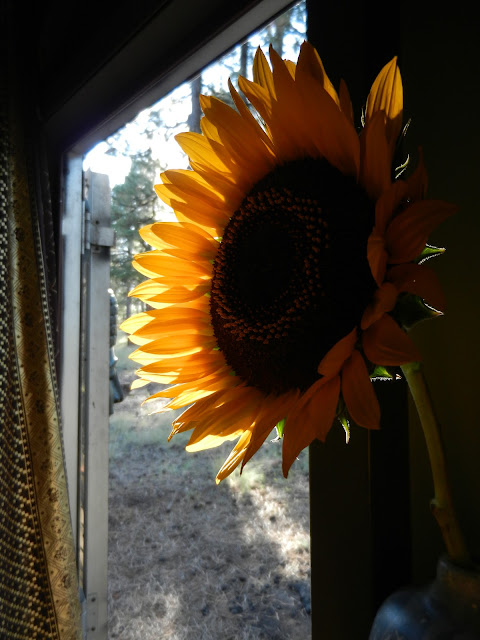 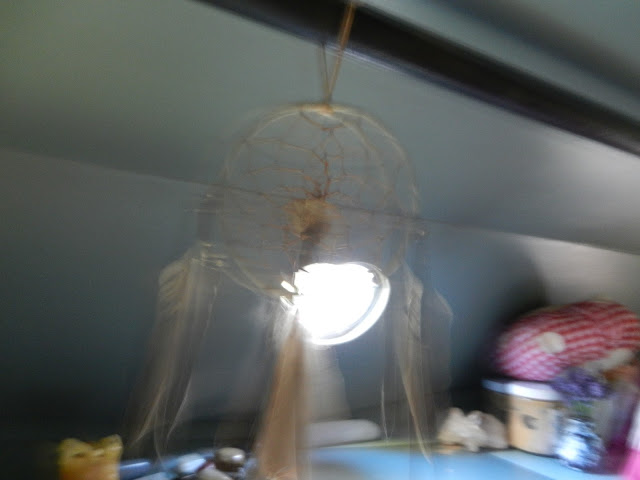 This is the little ledge and porthole window next to our floating bed  - juwels keeps a lot of her night-time treasures up here ; ) 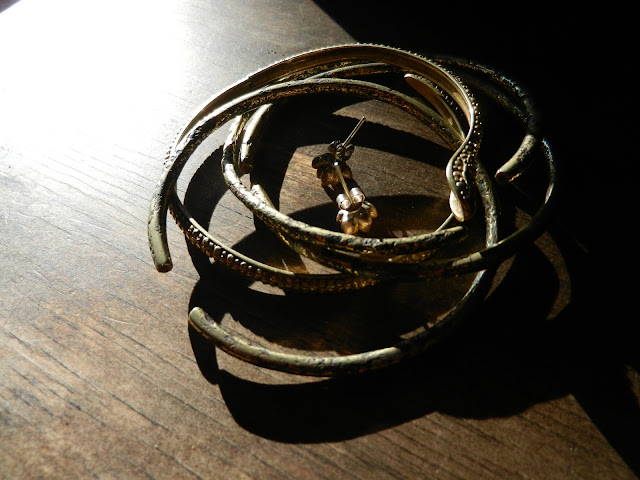 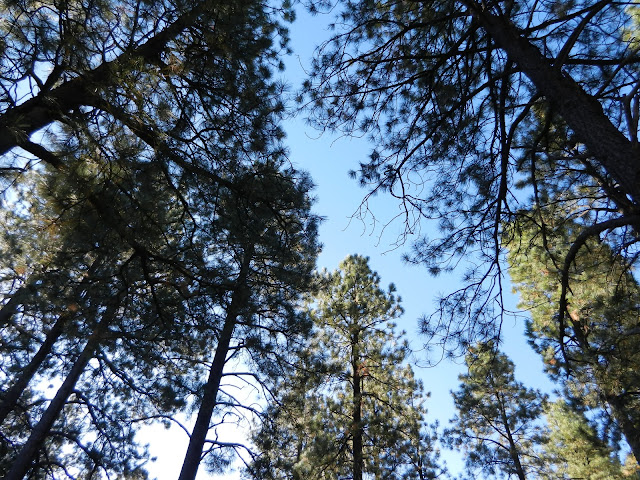 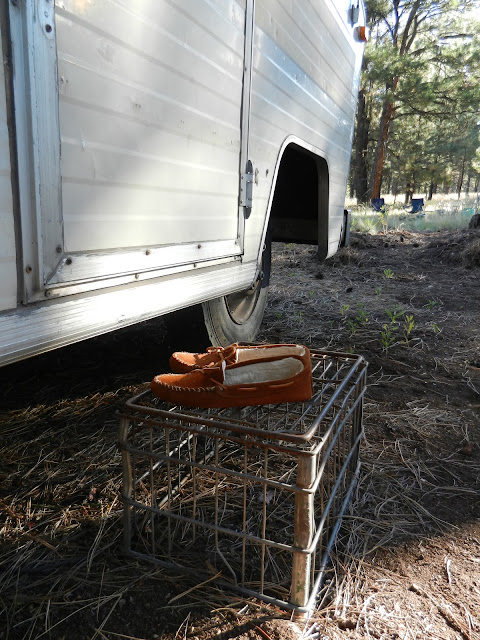 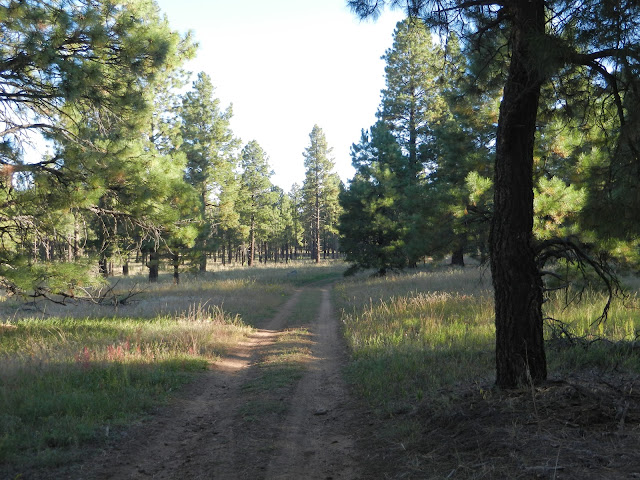 We'll tell you the rest of the story later ..
But I will say that fire became the theme of our exit.