Thought we'd do a little post about our alchemy. When we get large loads of wax - like the 5,000 pounds you see below - there can bee all sorts of goodies inside the solid blocks - hive materials like propolis, pollen, and varying amounts of bees that dive bomb into the cooling bins of wax back at the beekeepers house, so to make sure that we have clean wax for the best and brightest possible burn, we give the wax a little bath ; ) 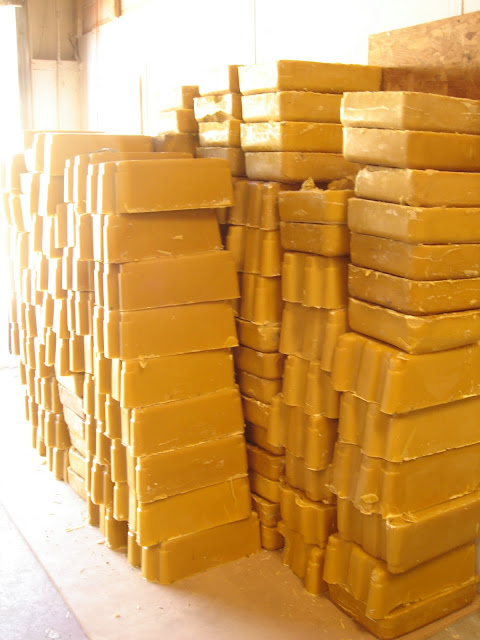 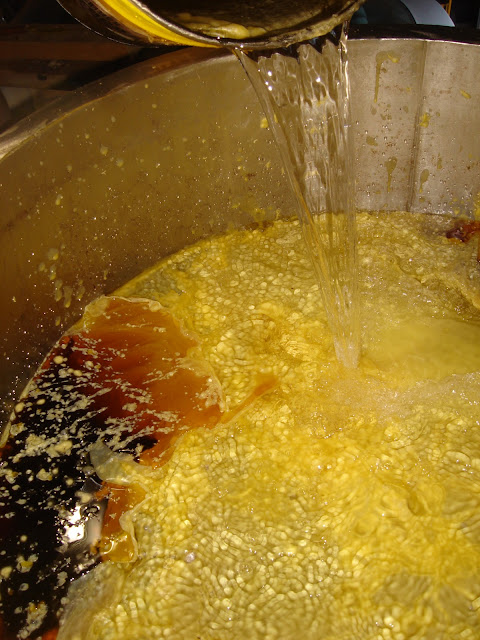 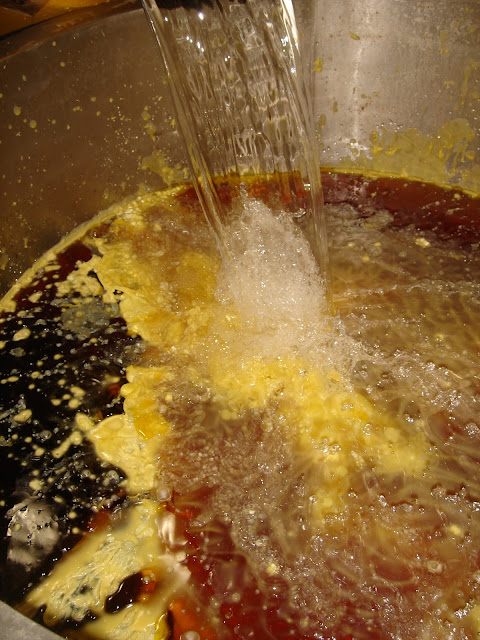 In our new studio we've upgraded from our little red honeypot, which held about 20 pounds of wax, and we have a couple different slow wax melters. This is our 1,000 pound melter which we use mostly for blending different wax batches to get a master gold.

We also do all our water filtering in this splish splash. (on nights when it's been in the mid 30's in the studio ((our heater was broken)) we joked about just filling it with water and climbing in together for a hot soak .. I think we were only about 7% joking ...) 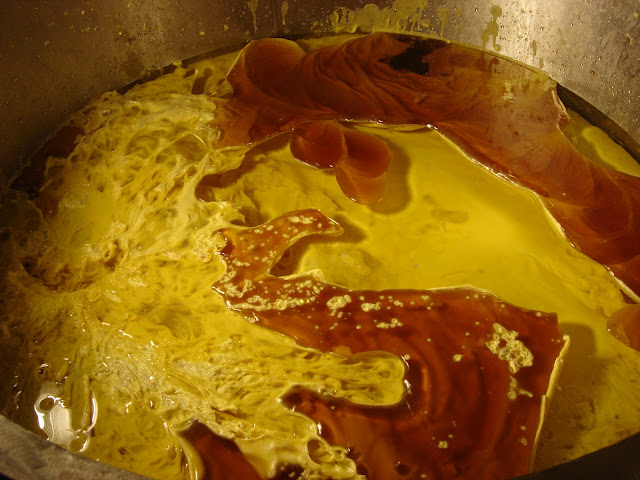 When the cold water connects with the hot wax, it's kind of like watching a lava lamp in fast forward. On late nights when we were working on empty bellies, it also looked like a giant vat of egg drop soup.

The yellow channels that you see above are the places where the cold water is sitting and creating solid bowls in the cooled wax. It solidifies like this instantly, and your brain kind of struggles to follow the paths as the water spreads into new areas. 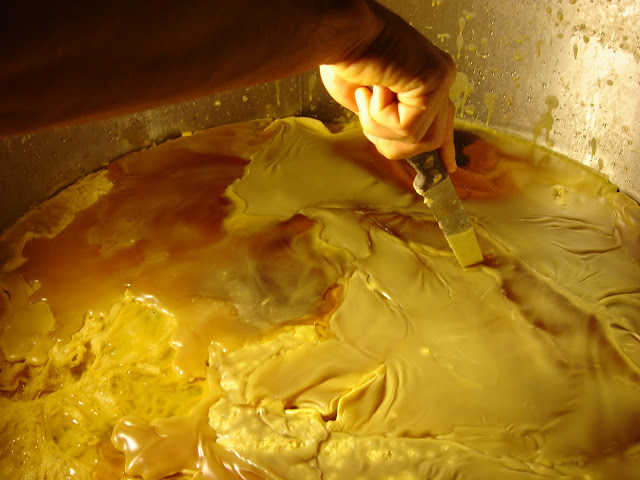 Why cut it with a knife? Well, really there's no reason for this besides that fact that we just couldn't help but try. It's an interesting texture to slide a blade through, all those thin overlapping walls which erupt into more hot wax, mixing with the water again and creating new forms. Besides, what ten year old could resist ?? : ) 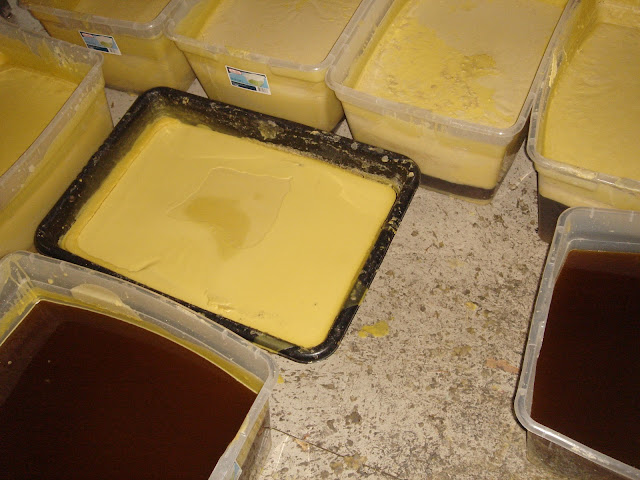 After all the egg drop has melted into the soup, we give the whole cauldron a stir to make sure the water and the wax are mixing up and playing nice (they're normally like oil and water .. which will come into play here in a second.)

At the bottom of the melter there's a big valve that can be opened to let the good times flow, and after we've attached a filter (pair of knee-high panty hose) to the end, we quickly run the cocktail into these tall bins. The big chunks stay back in the mesh of the filter, and everything else comes streaming through. This can get messy (just wait ; )

As I mentioned, the water and the wax naturally like to separate (you can see this in the bins above - the dark layer at the bottom is murky water, and the clean yellow up top is the wax), and the real magic for us is the third layer .. the stuff that beekeepers affectionately call "slum gum". Between the wax in the water, stuck in limbo, is all the fine particles of dirt and dust and elements from the hive. 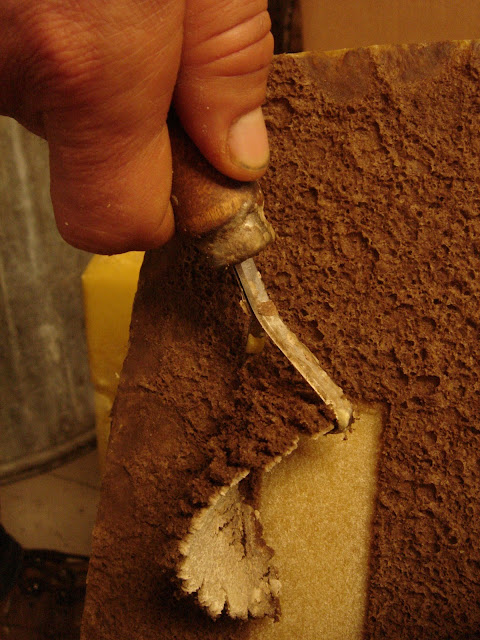 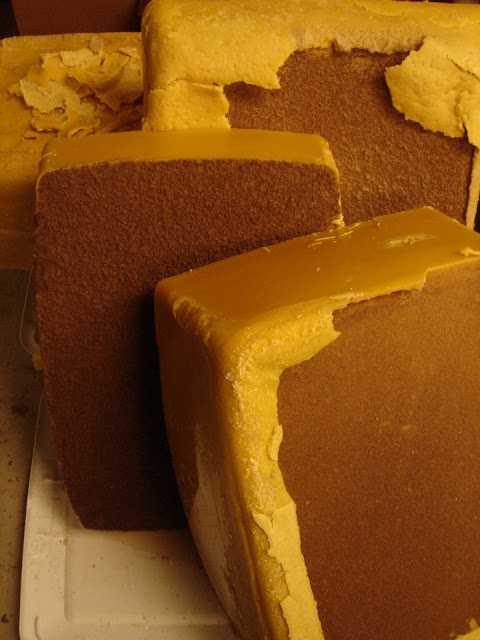 It's hard to rationally explain the pleasure that can come from digging a sculpting tool into this brown frothy mess. We fight over the job, and whenever we have a visitor over, we let them try a couple pulls of the old tool. Most times they're hooked, and beg for another ; ) 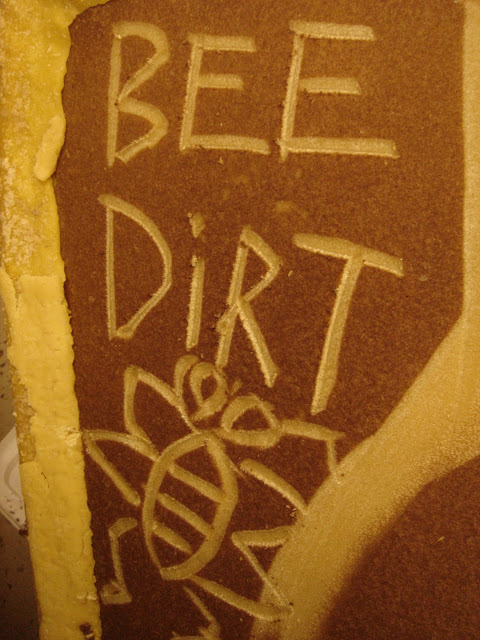 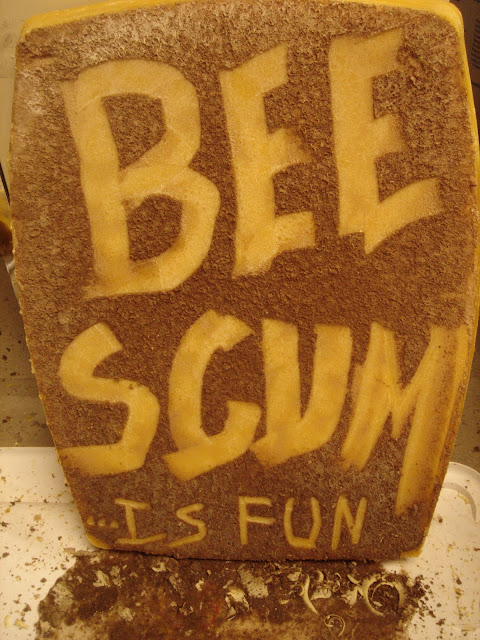 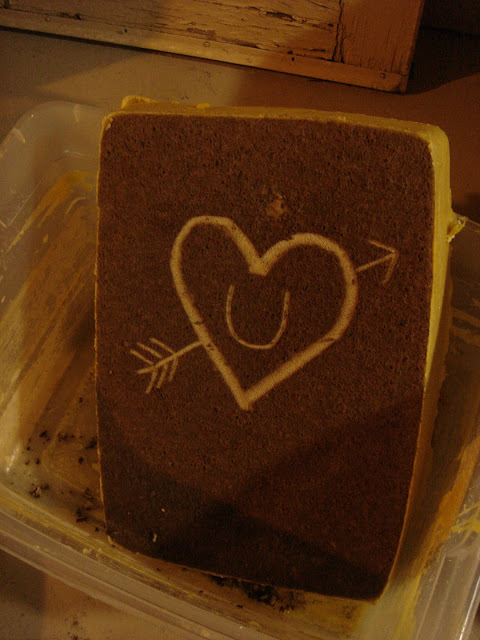 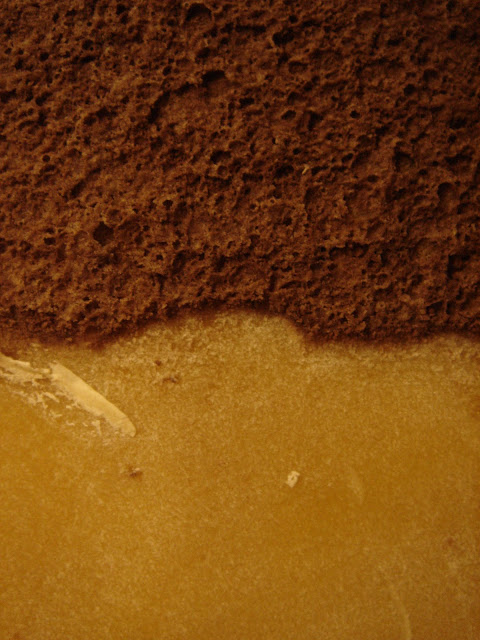 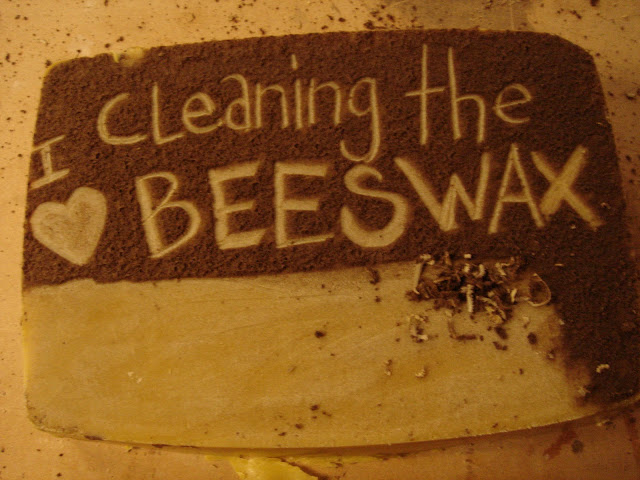 But with all the fun and excitement, things sometimes go awry ... see below ; - ) 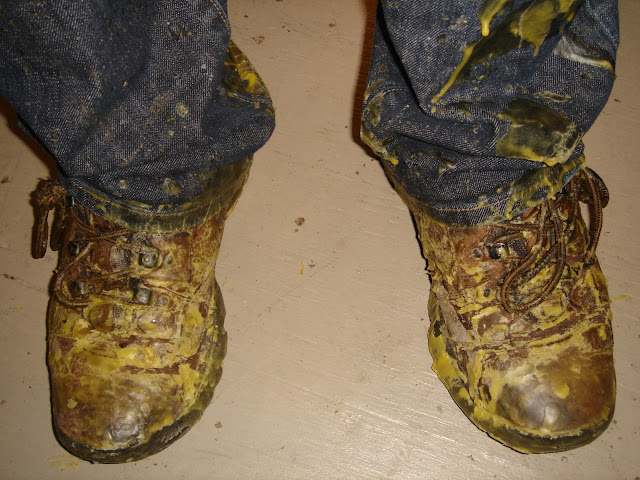 Now I still can't fully explain how this happened. In the heart of the action, it was one of those out-of-body things like you see in the movies, but let's start at the beginning. 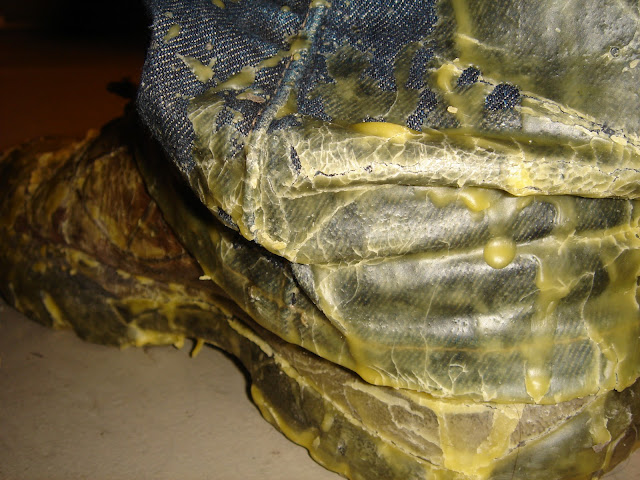 The big melter is only about 15 or 20 feet from the computer desk where I'm sitting now. On the day in question, I had just opened the valve to drain some wax into a bin. I just barely opened the spout, because I knew I'd be walking away from it for a second (the email alert ping had just chimed, and i'm a little obsessive about my emails ; )

Somehow, in the time that it took me to open the message and read one line of text, the bin was totally overflowing onto the ground !! I heard a sound like running water and cocked my head in disbelief, no way, but as I stepped around our huge packing table, I saw it .. 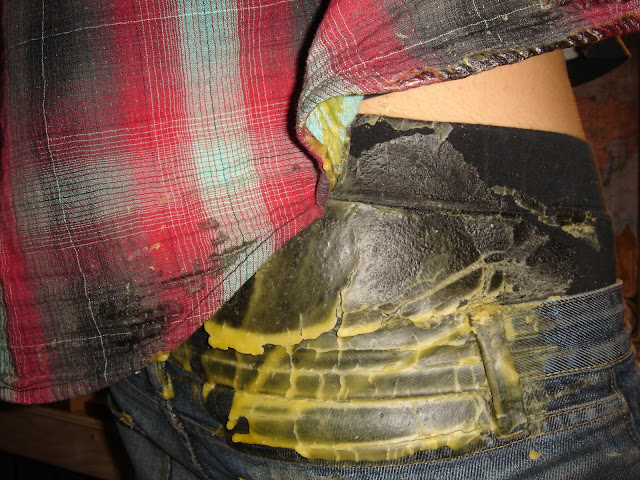 (yes, that wax soaked straight through to the skin and stuck like glue  ... not fun giving that the old yank.)

Here's where the slow-motion chase scene comes into play. Although I didn't believe my eyes, I instinctively started to run full stride for the melter which now had a large puddle of wax spreading out in front of it.

I even had my hand outstretched ahead of me, wanting to reach that valve as soon as possible. Juwels was on the other side of the room by the sink, and glanced over when she saw me bolting down the hall. It wasn't until my front foot hit the puddle before I realized that hot wax doesn't make for the most solid footing. Maybe it wasn't even that soon. I think I was so intent on closing that flow, that I didn't even realize that anything was amiss until I was literally horizontal in the the air. ..

As I splashed ass-first into the liquid wax, I remember having a surprisingly coherent thought like ... "really?" ... "Reeeeally???" My elbows shot back and saved me from a full lay-out as I continued to slide. I slammed into the bottom of the melter which was temporarily sitting on a stack of milk crates. The whole thing shook, and the reality that I might become an unwitting wax sculpture set in. Even still, writhing around on the floor as I was, I somehow reached the valve and closed it off. 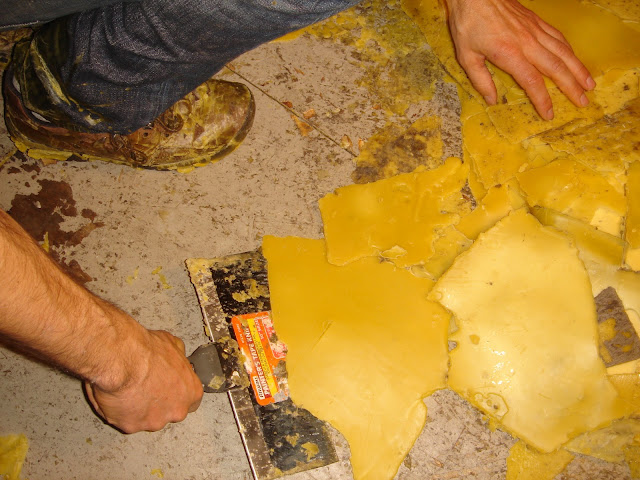 Enter Juwels: calmly walking around the packing table, she stood there with pursed lips and a mason jar of nut milk in her hand. "Not again..." (yes, I spilled the melter once before - but it's not as fun of a story, and in my defense, it was just after we'd taken that hellish drive through the Mojave desert, and my brain was a little fried..) Normally, she would have run over and swathed me up, inspecting for any cuts or bruises .. but I was already hysterically laughing by then, so she just smiled and took in the show.