We got a call the other day while we were off walking in the woods with the goats (and Maya the chicken - Juwels insisted) and we found out that there was a late swarm stranded on the other end of town. (It's fun never knowing when you're going to get one of these calls. In the morning, you've got one plan and in the evening, you're up in somebody's apple tree with a crowd gathering on the sidewalk.)

When bees swarm at this time of year, it's pretty much a suicide mission. The flowers have all froze, so they can't make honey or wax, and they'd basically just die in a tree : ( So were were very happy to come to the rescue !! 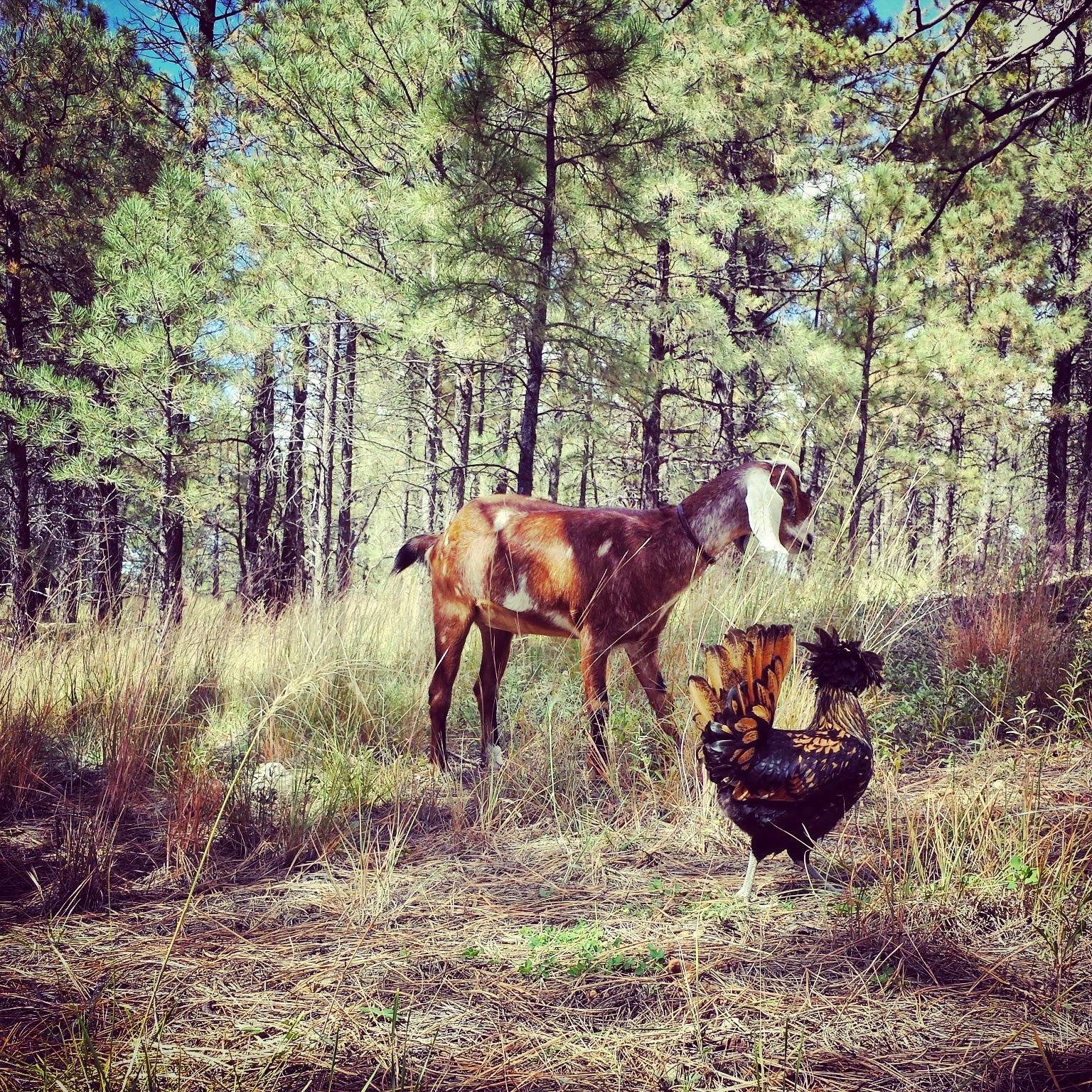 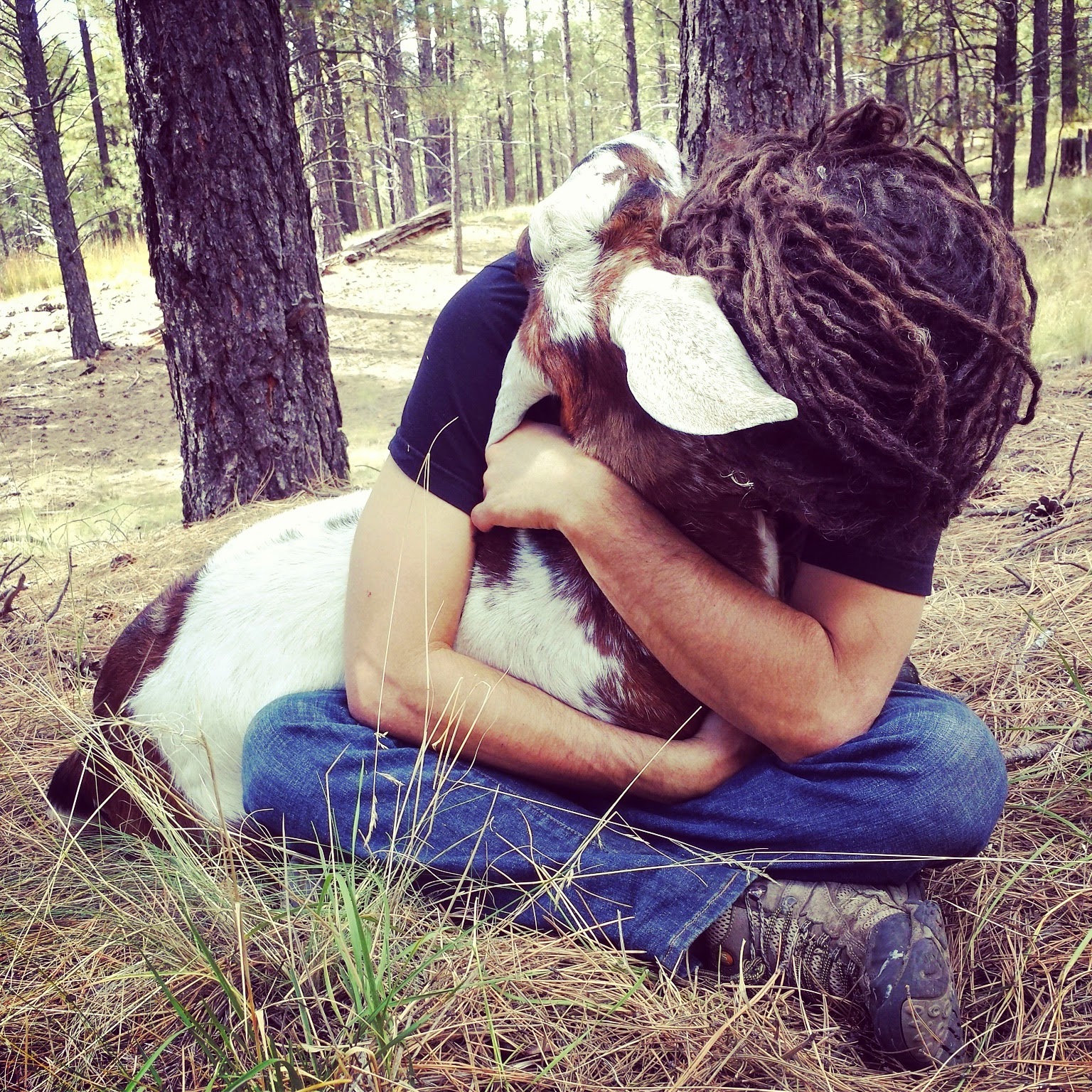 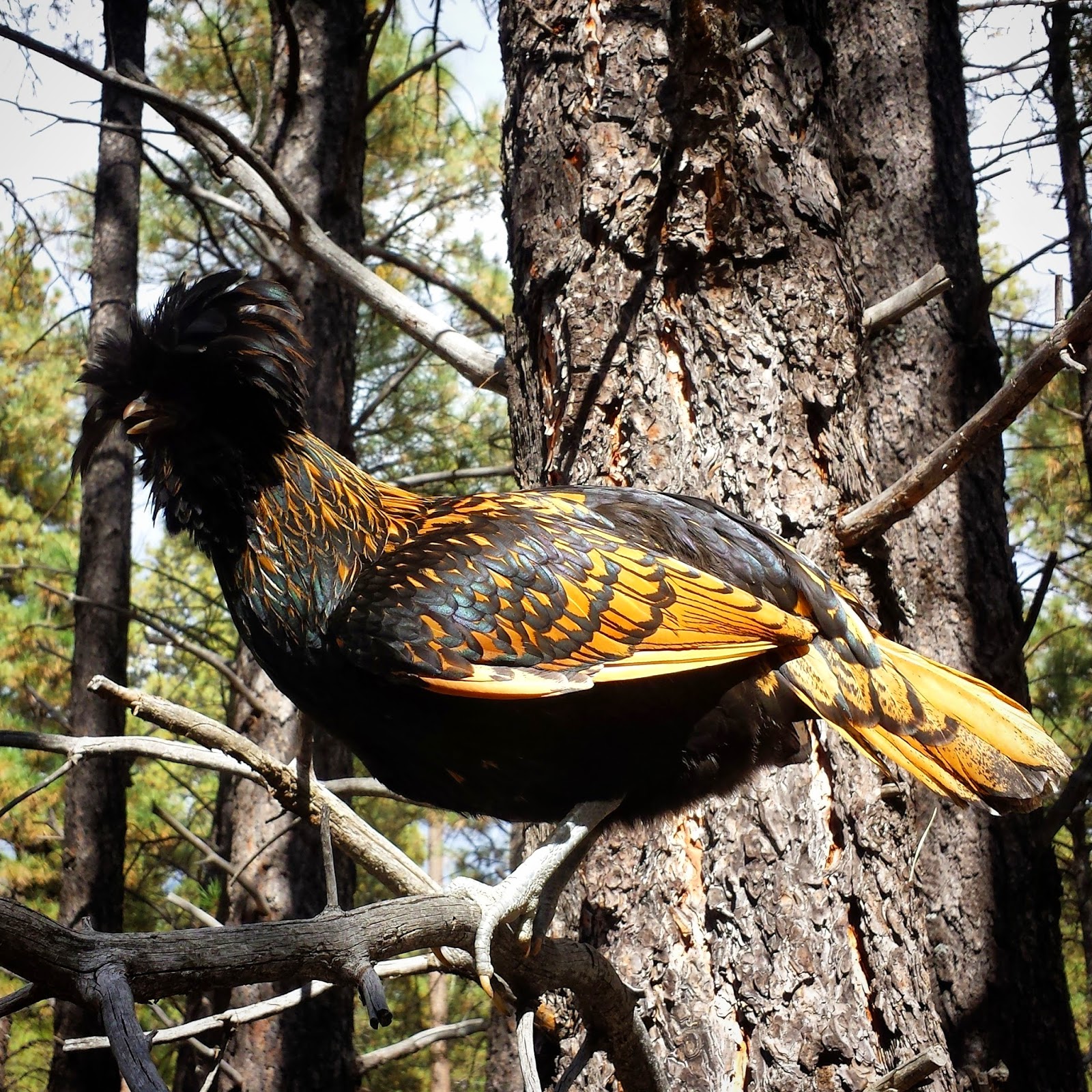 Here's a few pics from the catch - the bees are living with us now, happy and warm : ) 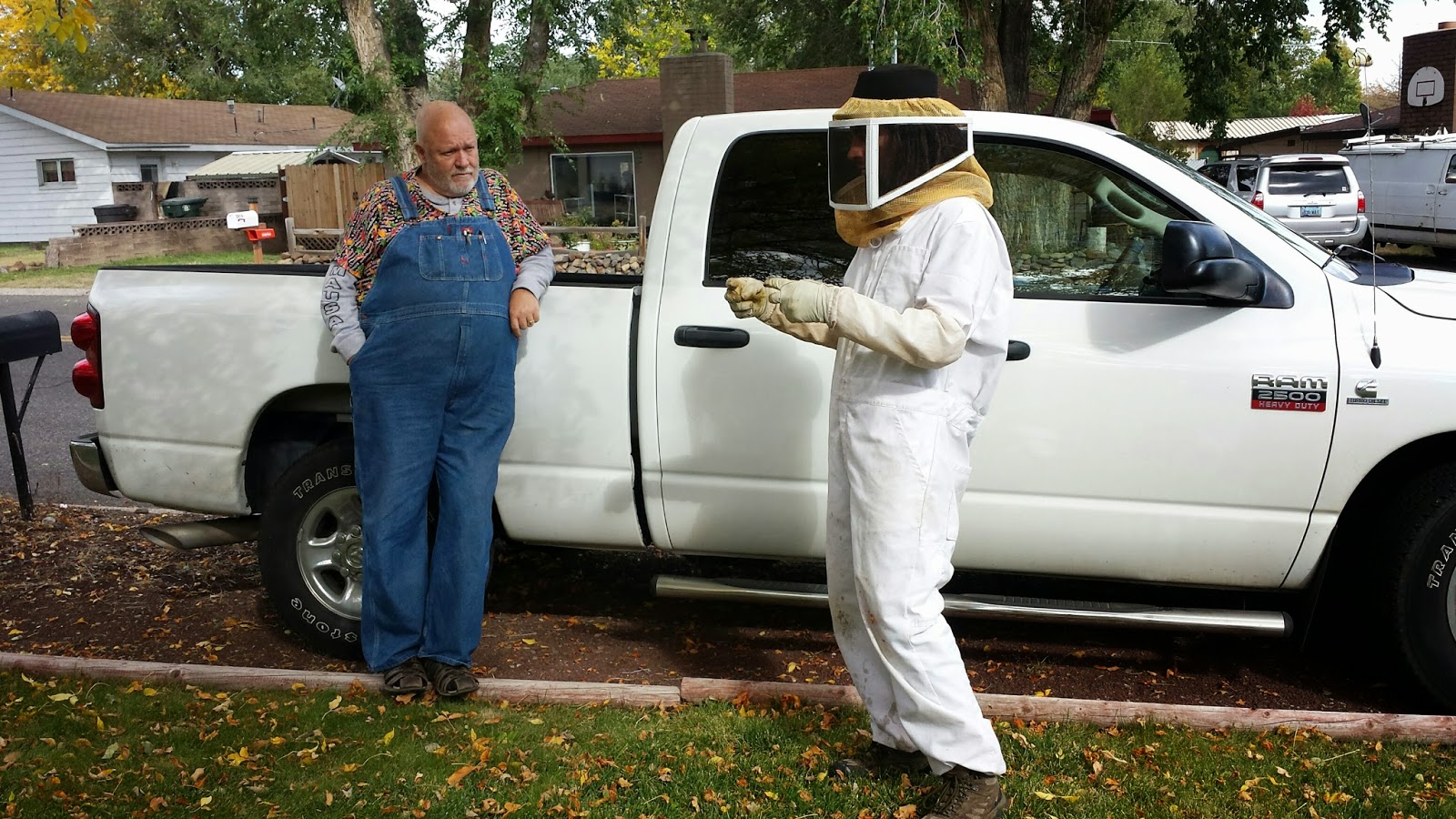 We were just talking to a beekeeper friend of ours up here in Flag, and when he mentioned that he doesn't waste his time trying to catch swarms anymore, we told him that he should refer any calls to us.

He's been the bee guy up here for over 30 years, and everybody knows him, and this suggestion turned out to be a good move because just 3 days later, he had a lead for us : ) 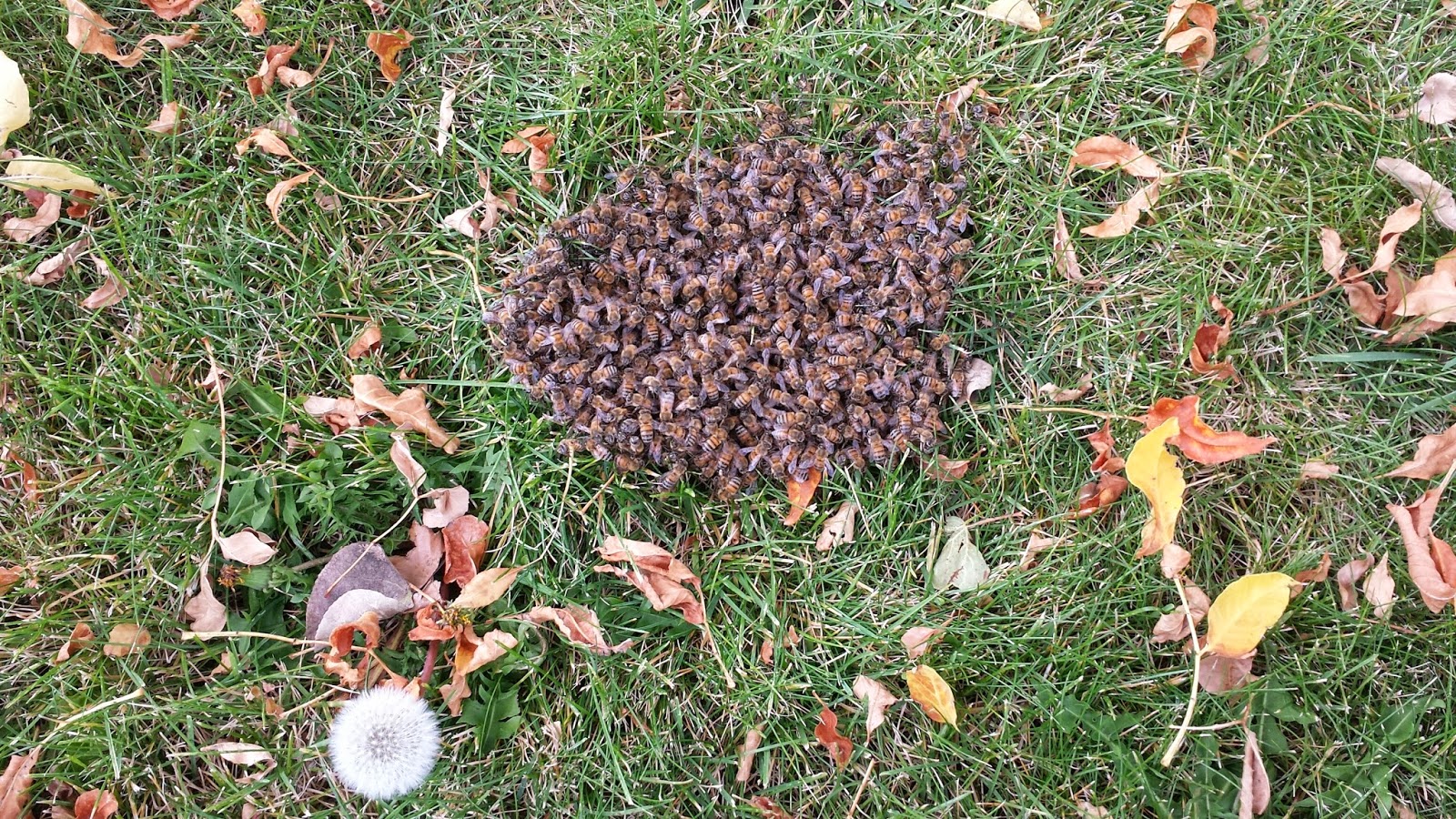 Hey said the bees were on the ground (not such a good sign as they should be hanging in a tree) but we suited up and head out to see what was going on and if we could save them.

The cluster was tiny, and I poked around with a finger to see if the queen was in there, but we decided that we better just get them into the box and not scare them into the air. if they didn't have a queen, they wouldn't be a functional colony, but we can always combine them with one of our other small hives : ) 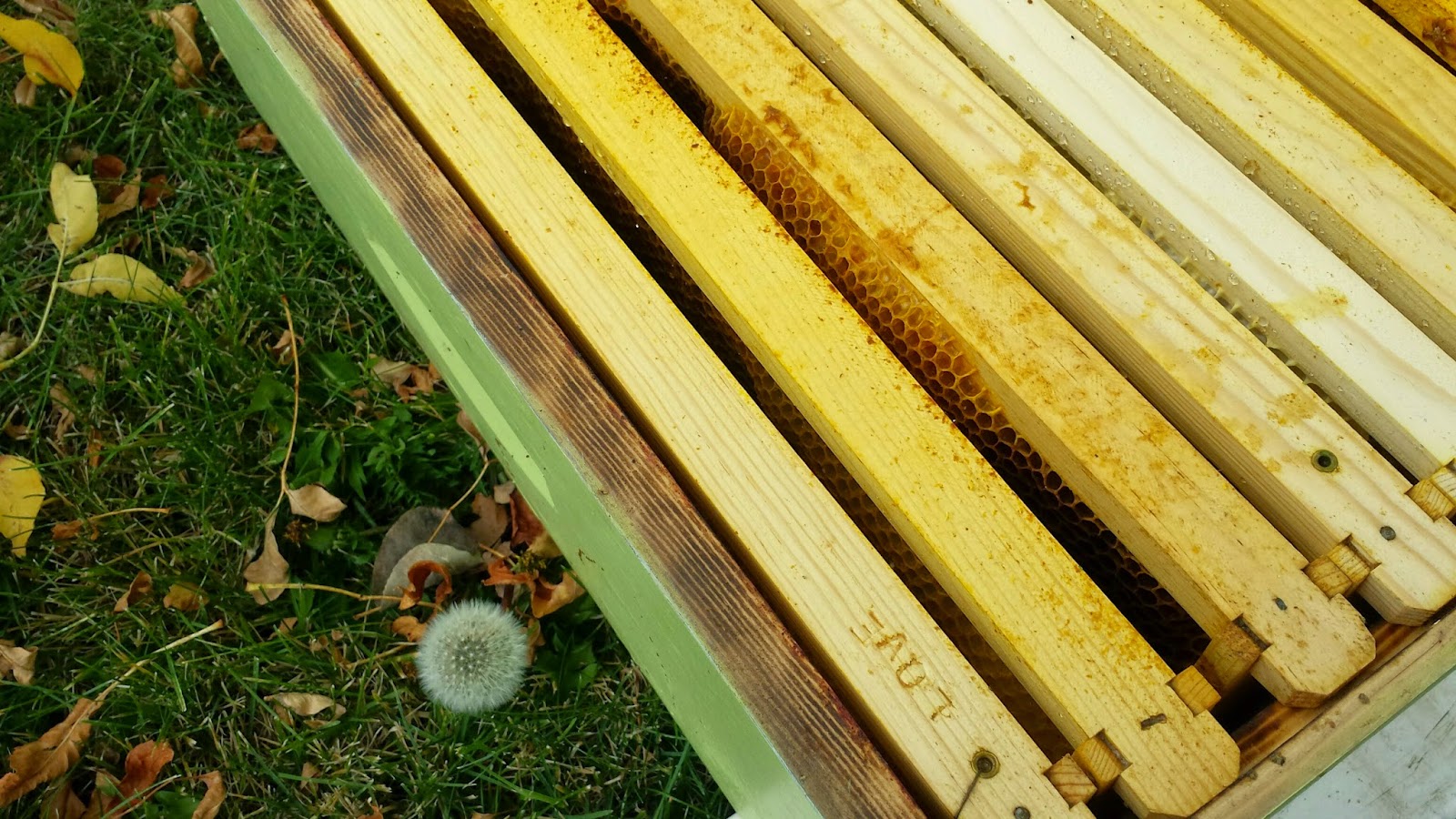 We had a whole box of fresh honeycomb from one of the hives we recently lost, so these bees would have a place to live and lay right off the bat and not have to build comb from scratch. A lot of the time when people try and catch a swarm, the bees just leave again, so having extra motivation for them to stay really helps. 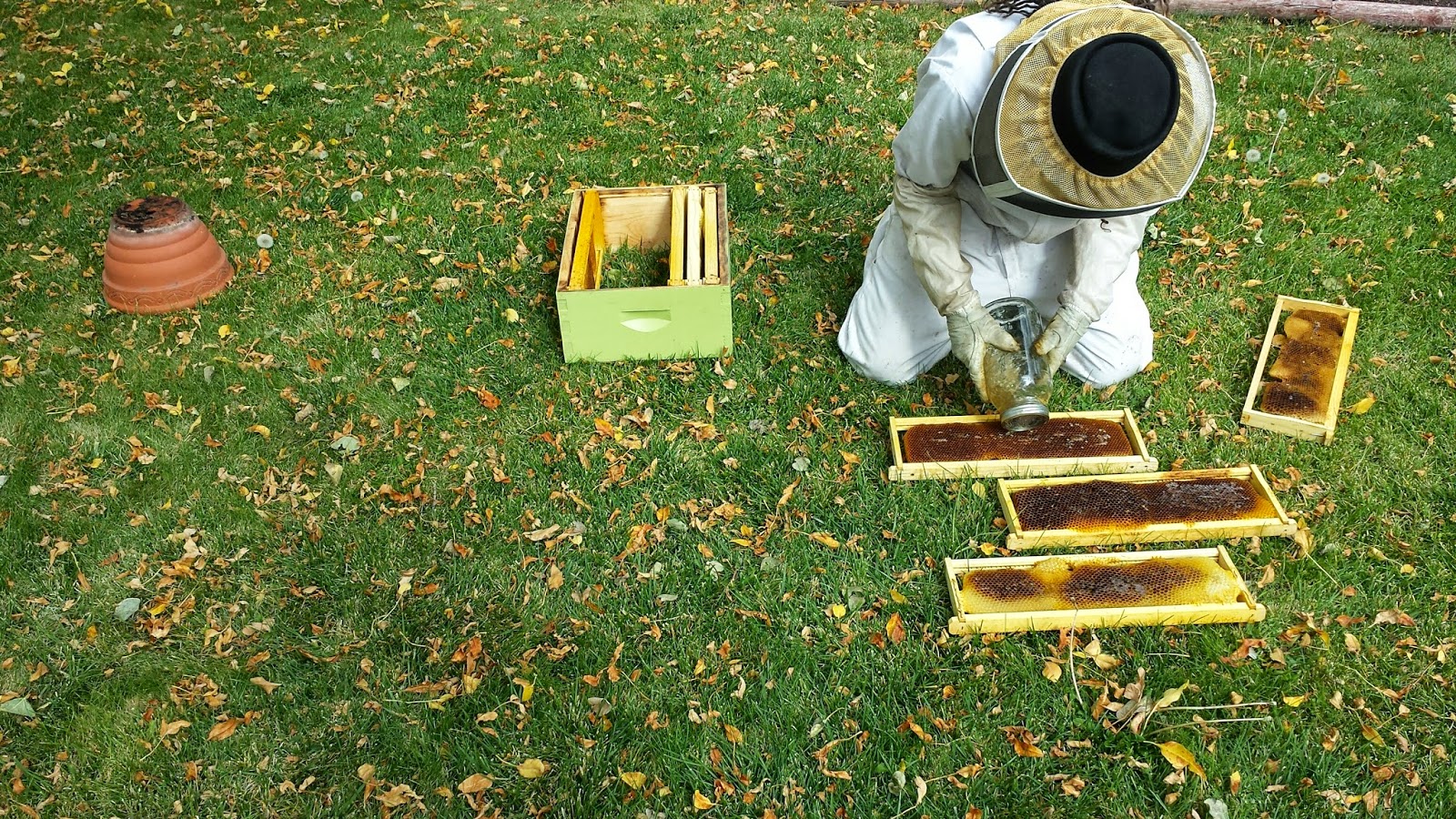 Most times, swarms are starving when you get to them, so we brought along a cocktail of spring water and organic evaporated cane juice as food, and I had the idea to sprinkle it into the empty comb before placing it over the bees. This tempted them up from the grass and into the box, and they ate with glee : ) 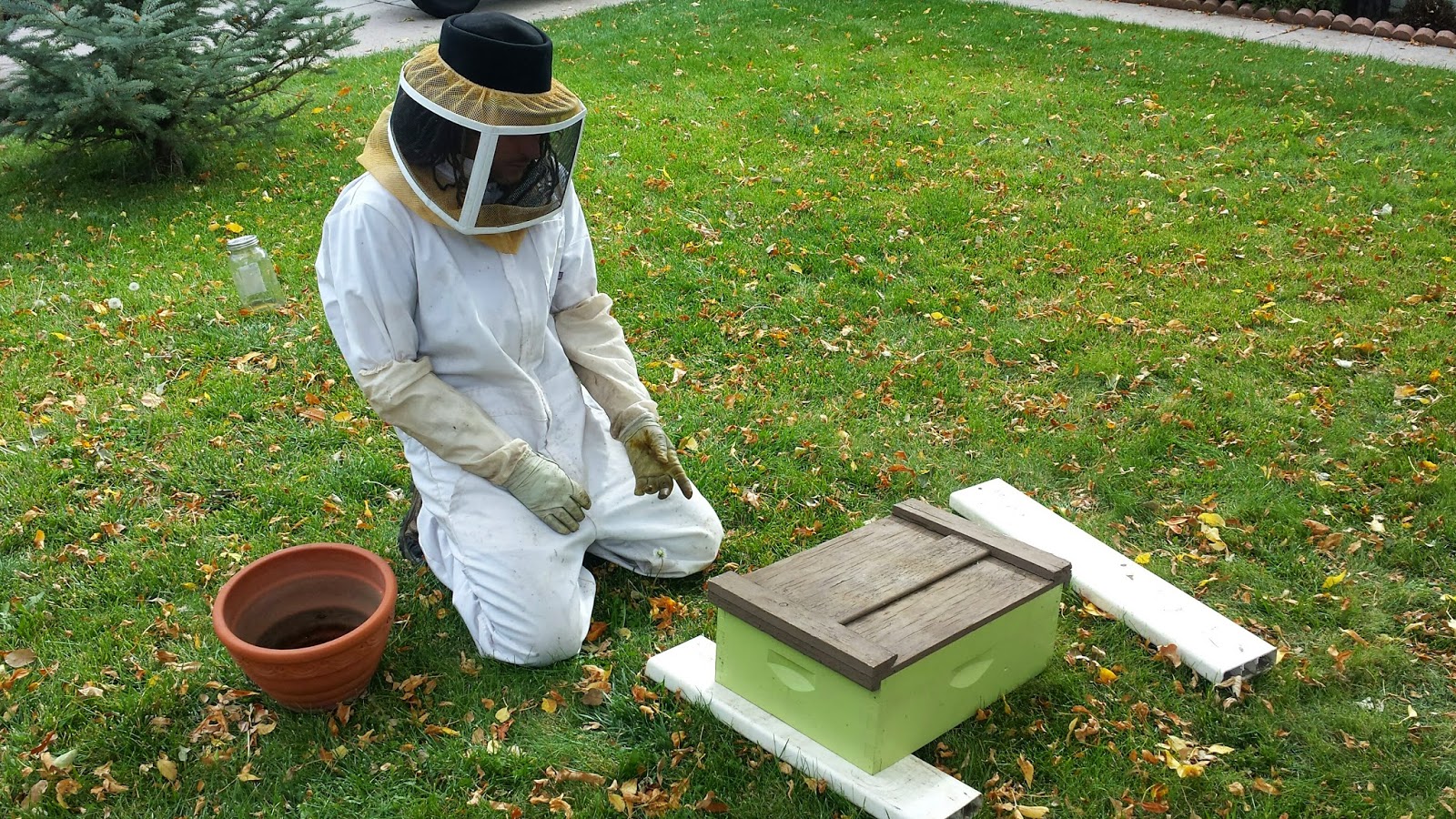 As I was sitting there waiting for the bees to climb aboard, a neighbor across the street came walking over and said, "You guys have bees over there, too?"

I asked him if they had bees, and he pointed to a beautiful overturned octopus of an apple tree, and said, "Yeah, a bunch of them."

He told us that an old fence had been taken down a few days ago, and that the bees had come from there. He also mentioned that he didn't know what to do with them, and he was worried about his kids, so he'd sprayed them the other night with long distance wasp spray : (

Next season, we're going to start advertising like crazy, so everyone will know who to call when they see a swarm : )

Luckily he didn't kill them ... probably just shot into the tree and ran like hell, and we were able to inadvertently find out about them through his neighbor's call. 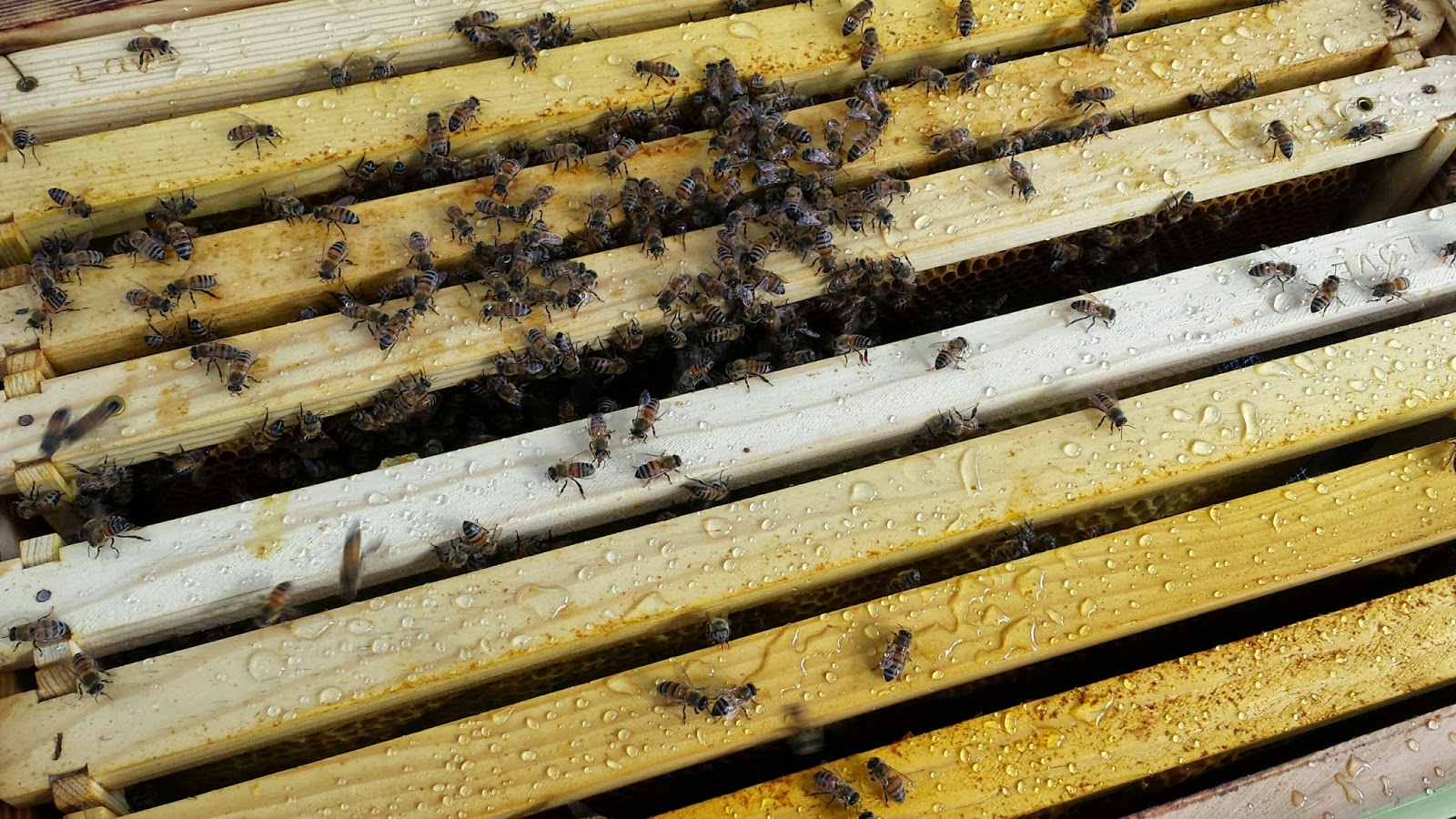 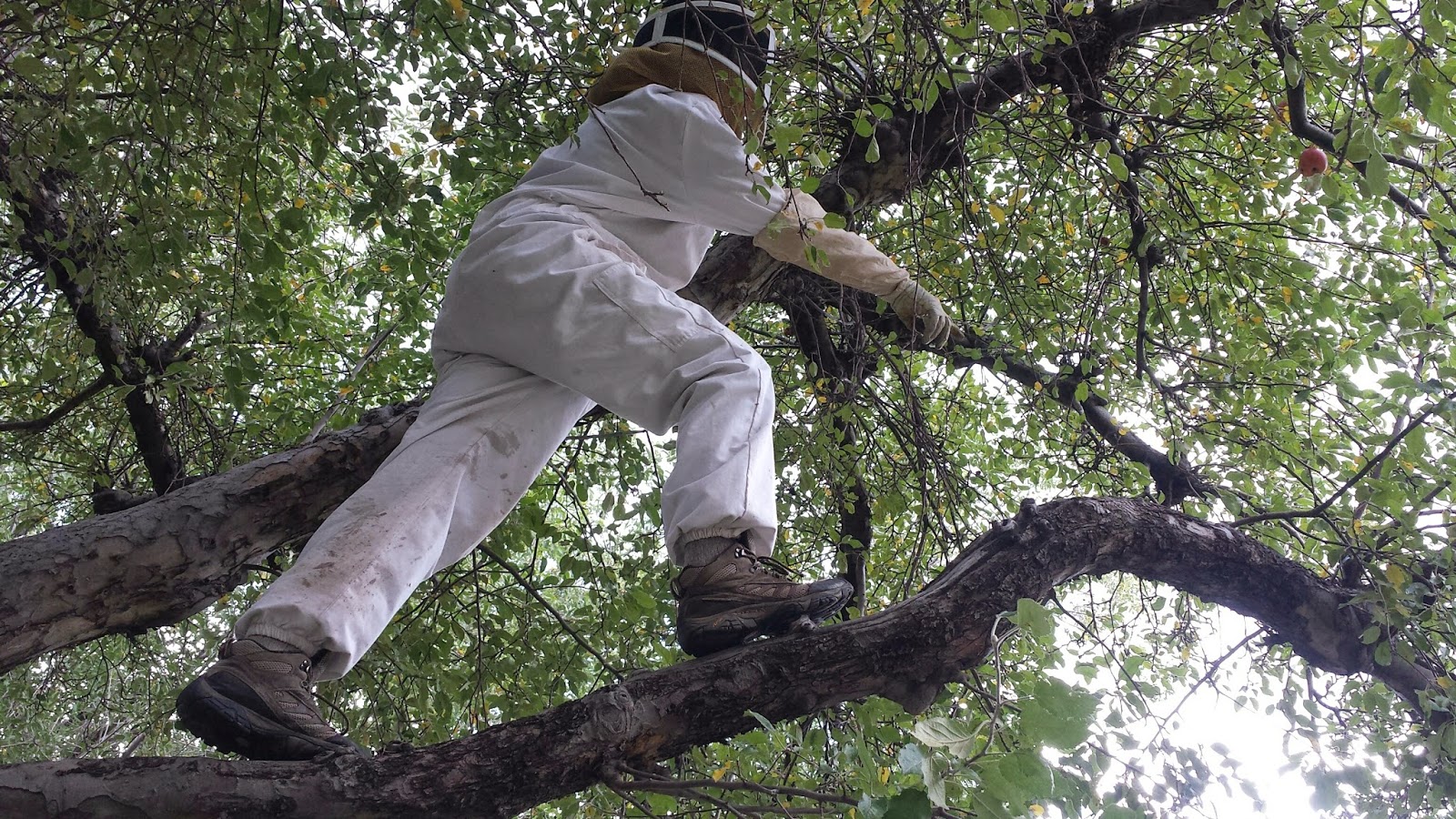 We checked out the cluster. It was much bigger than the one on the lawn, and we figured they must have been from the same swarm. A few minutes later, I saw another clump lower in the tree, so we got ready to catch them, too, and reunite the family : ) 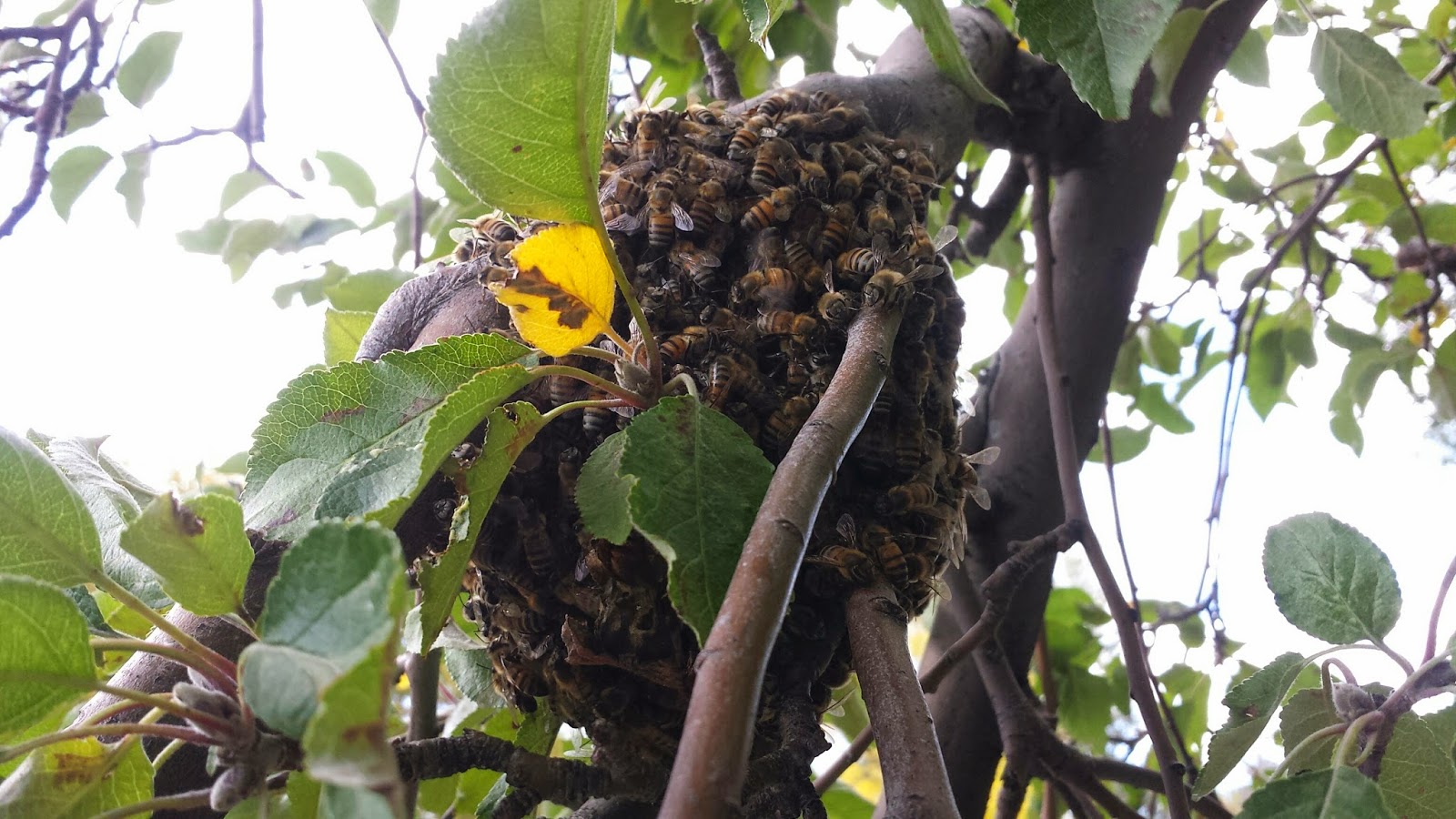 This is the smaller clump - not sure why they split off. Maybe they were getting too hot together ? 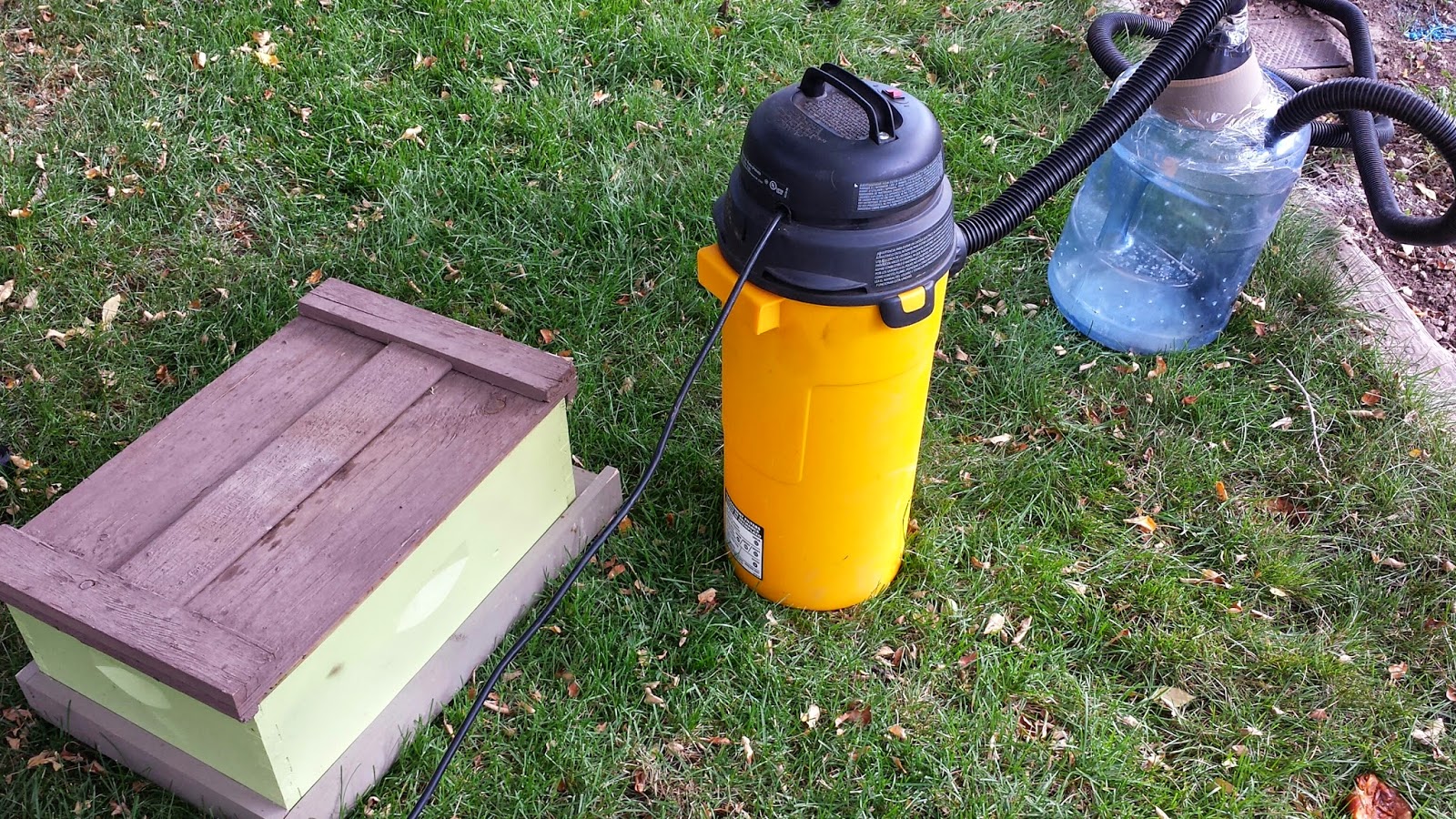 Luckily, we'd brought along the bee vac. We plugged it in at the second house and got to work ! 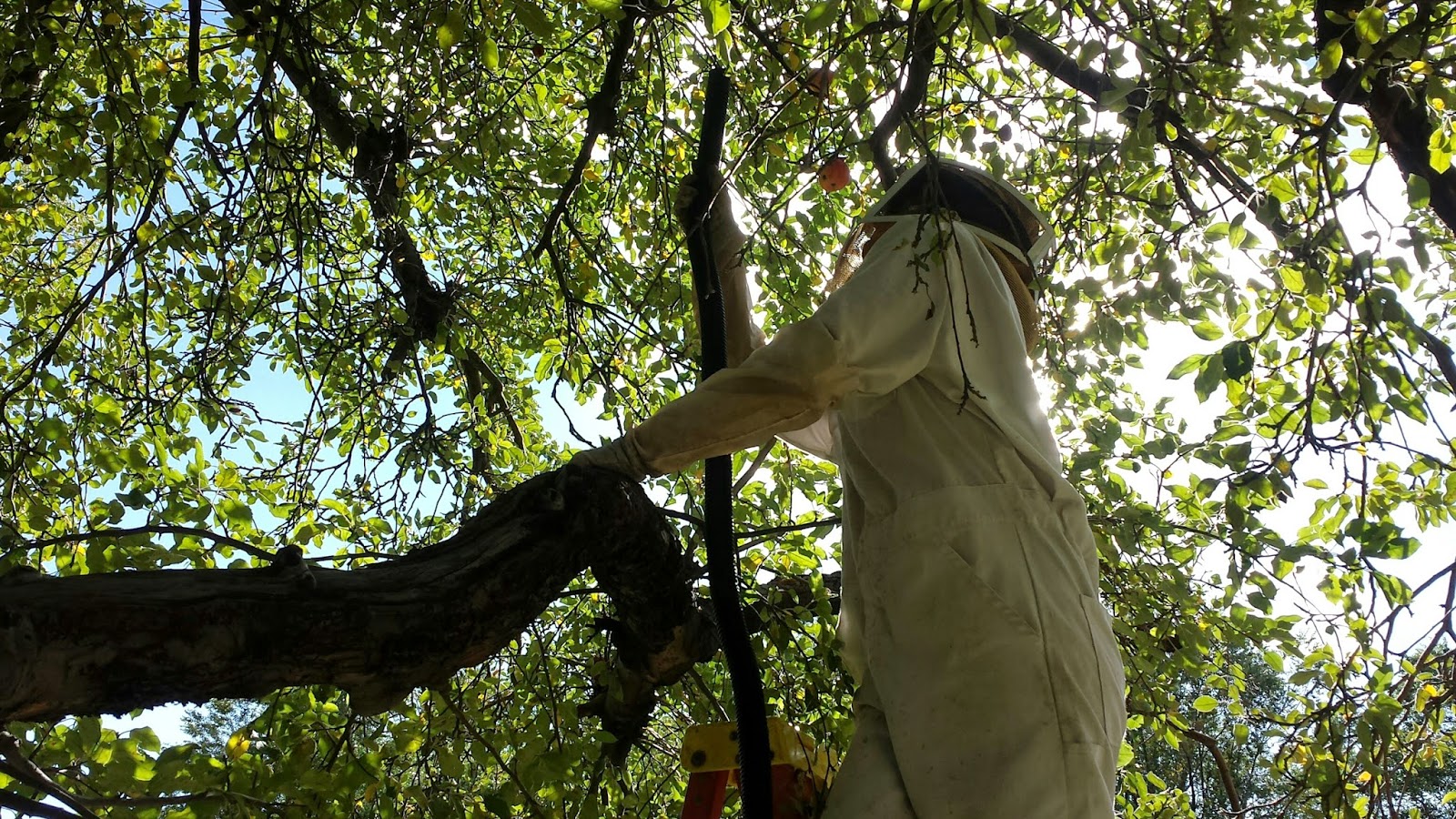 I got a big bunch of them, and then emptied the chamber into the hive, and we wondered if we'd gotten the queen in that batch.

Normally, if you get the queen in the box, you'll see bees standing on the edge of the box and "fanning" ... this is when they stick their butts in the air, and fan the pheromone to the others in the tree,  saying, "Come on down here .. the queen has moved !!"

And we were happy to see a bunch of striped bee butts in the air after the first round : ) While I was back up in the tree, Juwels flipped through the frames and somehow found the queen !! She was a tiny queen, a sweet little pixie : ) 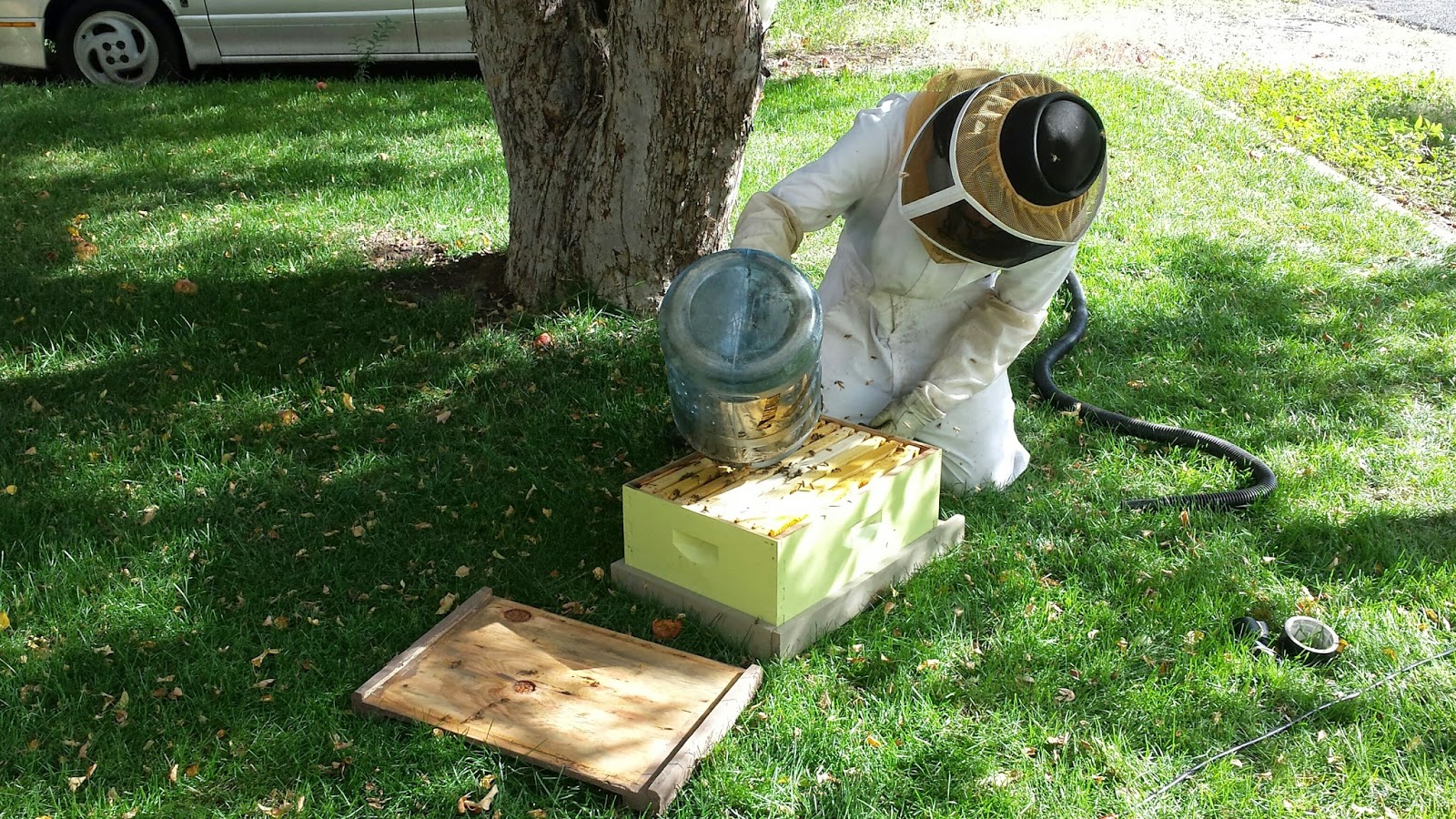 I did two more passes with the bee vac (this is rigged up to have very low power, just enough to move them down into the vented chamber) and every time I'd empty the load, less and less bees would go back up into the tree (the queen leaves some kind of scent on the spot in the tree, and it takes the bees a little while to figure out that she's in the box and not in the tree anymore.)

The lady of the house loaned us some perfume, and after I'd removed all the bees from the spot for the last time, I sprayed the area with the perfume - strong stuff - and that threw the others off the scent, and they just kind of hovered around. 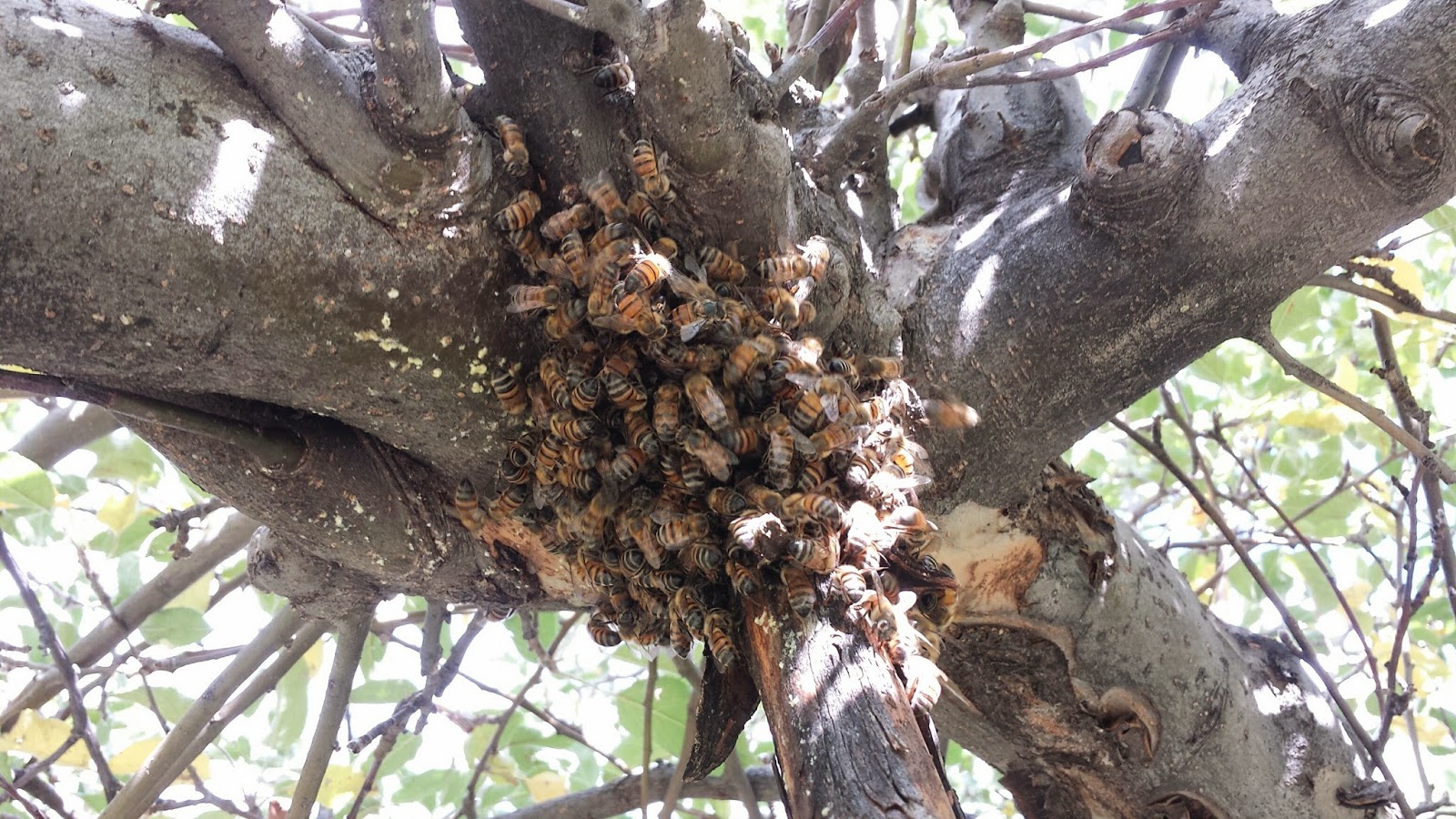 We asked if we could leave the box under the tree until after dark, when it got cold, and she was happy to help in anyway, and when we came back at around 8pm, there wasn't a single bee in the tree, and everybody had moved in : )

We covered up the entrance, strapped everything down, and let the little girls ride in the truck with us.

The catch was a success, and they're now happily part of the Fair Share Honey crew !!

Thanks for reading, loVe,


Here's a couple videos of other swarms and hive relocations we've worked with : )