So yesterday we checked in on the bees for the very first time since that {late night} when we dropped them off .. and we've found that we're instantly addicted to being around them : )

They look happy and healthy with cells packed with the most beautiful bright orange and yellow pollen (this is what gives the beeswax that color we all love .. that, and the honey mixed in) and lot and Lots of babies!!

Everything was so fresh, clean and perfect, and they're building prolifically, fueled only on desert nectar, no feed to help comb building or start up, and they're doing great !!

A lot of people say that it's not good to check in on them too much (let the bees be bees) .. and then other people say to pop in every week to check for moths or other intruders, and since we set them up way down in the desert, we'll be forced, by proximity, to let them bee for spans while we hang up here on the mountain ... but all we want to do is sit there in the dirt and spy on those busy little bees. all. day. long.  : ) 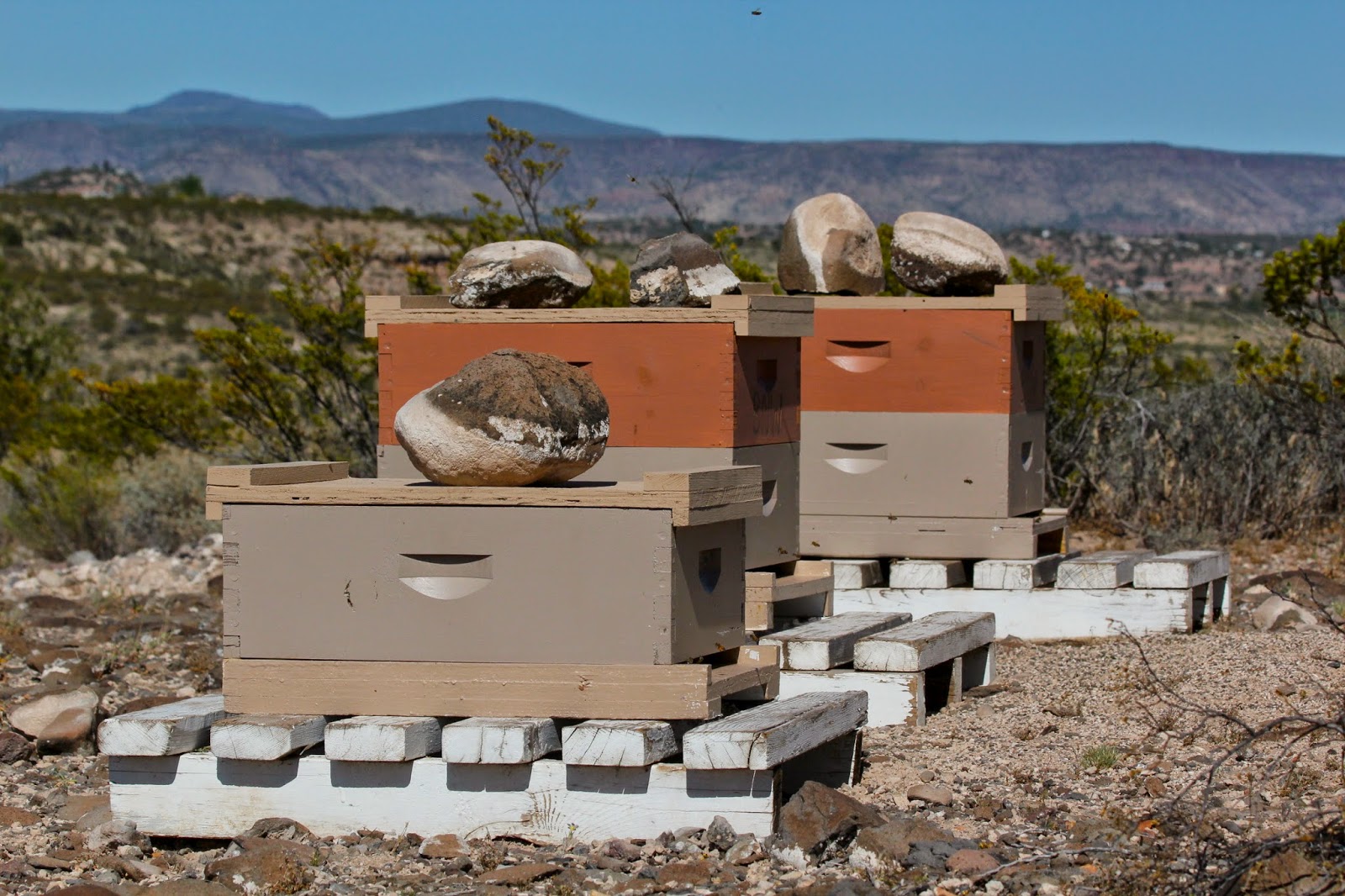 We've only had the bees for a week. And when we met the swarm catchers down south on that eve of earth day, they'd already strapped everything down for travel. The bees come in a single box, but they sweetly offered to add a second box for each hive, with frames, free of charge : )

They told us that two of the colonies had gotten much larger than they'd expected, so they added the second boxes upfront, but the third was still pretty small, so it stayed as a one-stack.

Today's mission was just to drop another level on the small hive and be gone. We wanted to give them three weeks to repopulate and mellow out, and it had only been a week to date. 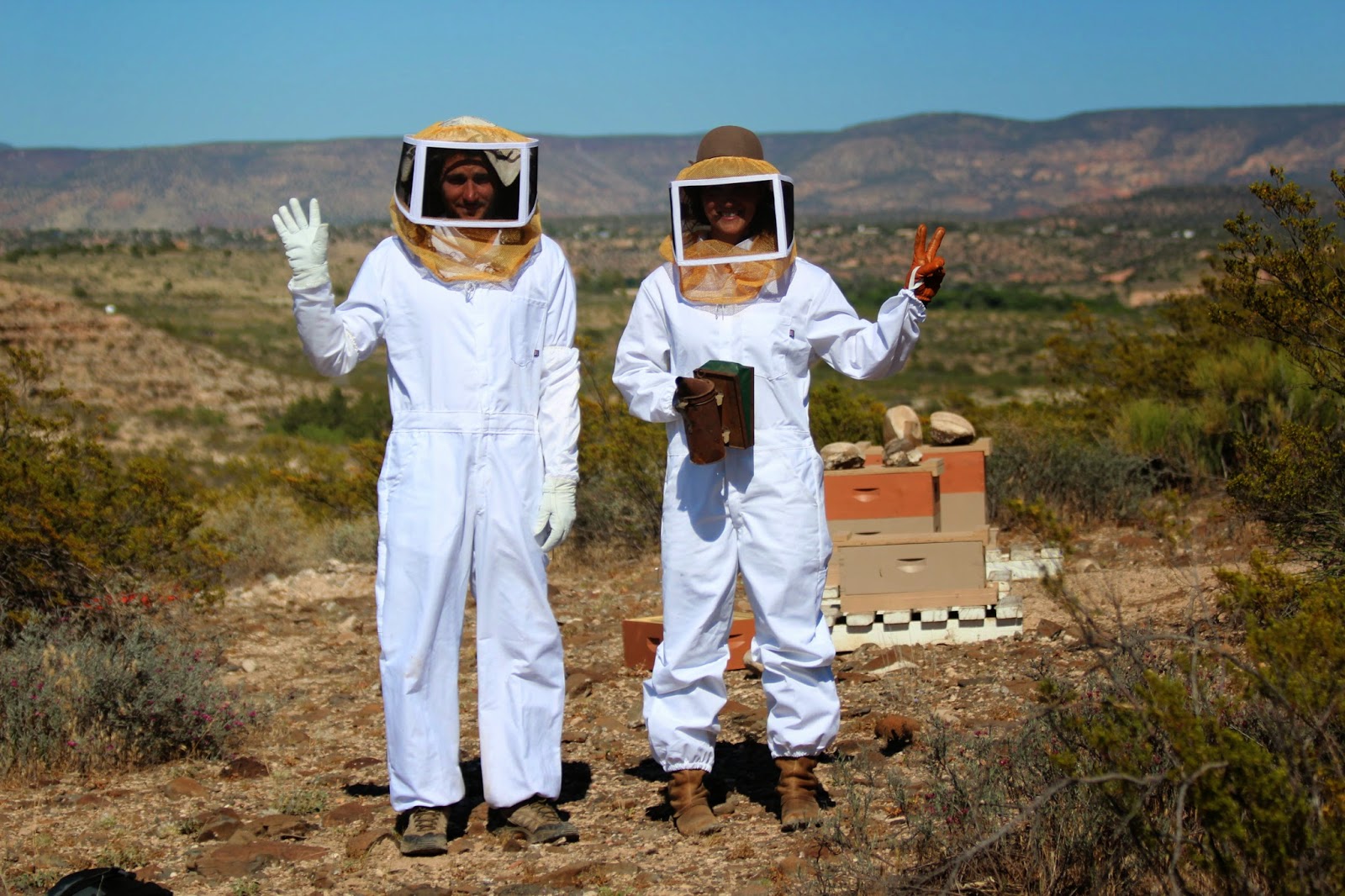 I hear a lot of people complaining about the suits, that they're hot or that there's some loss in connection with the bees if you're in a suit, and although juwels jokes about becoming the first nudist beekeeper (at least I think she's joking .. ) we were both happy to have the suits on this go, and it definitely kept our energy super pleasant and relaxed = good for the bees : ) 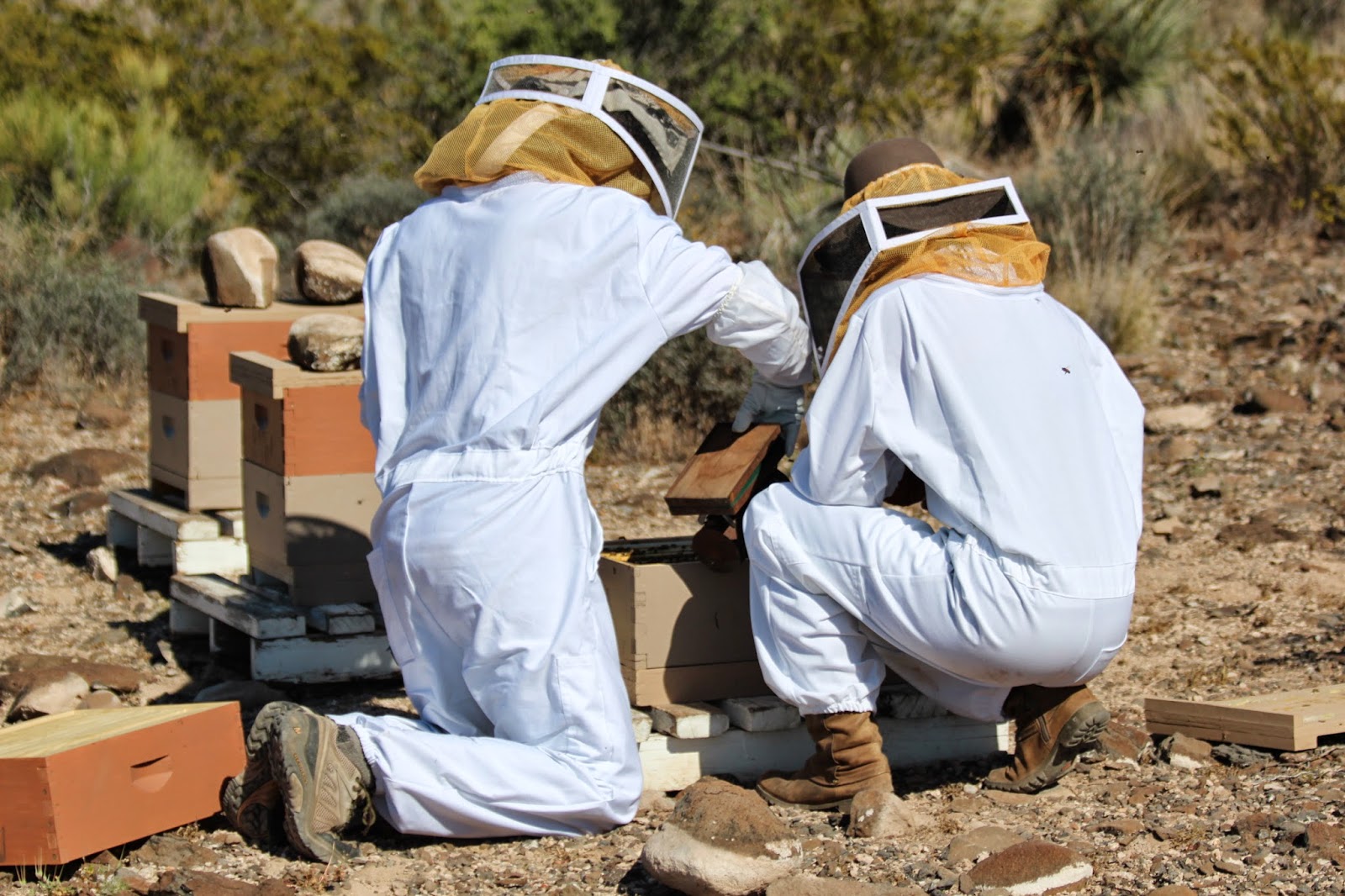 We brought some hand-picked white sage from our days camping and soaking up in Ojai, California, and the smoker smelled enchanting.

The bees were so well mannered - it was amazing. They sent out some scout bees when we first showed up to watch them from a distance, and those ladies probably flew back to the hive and said, through interpretative bee dance, that it was just us, those crazy people who'd brought them up to their new eden, and all was well. 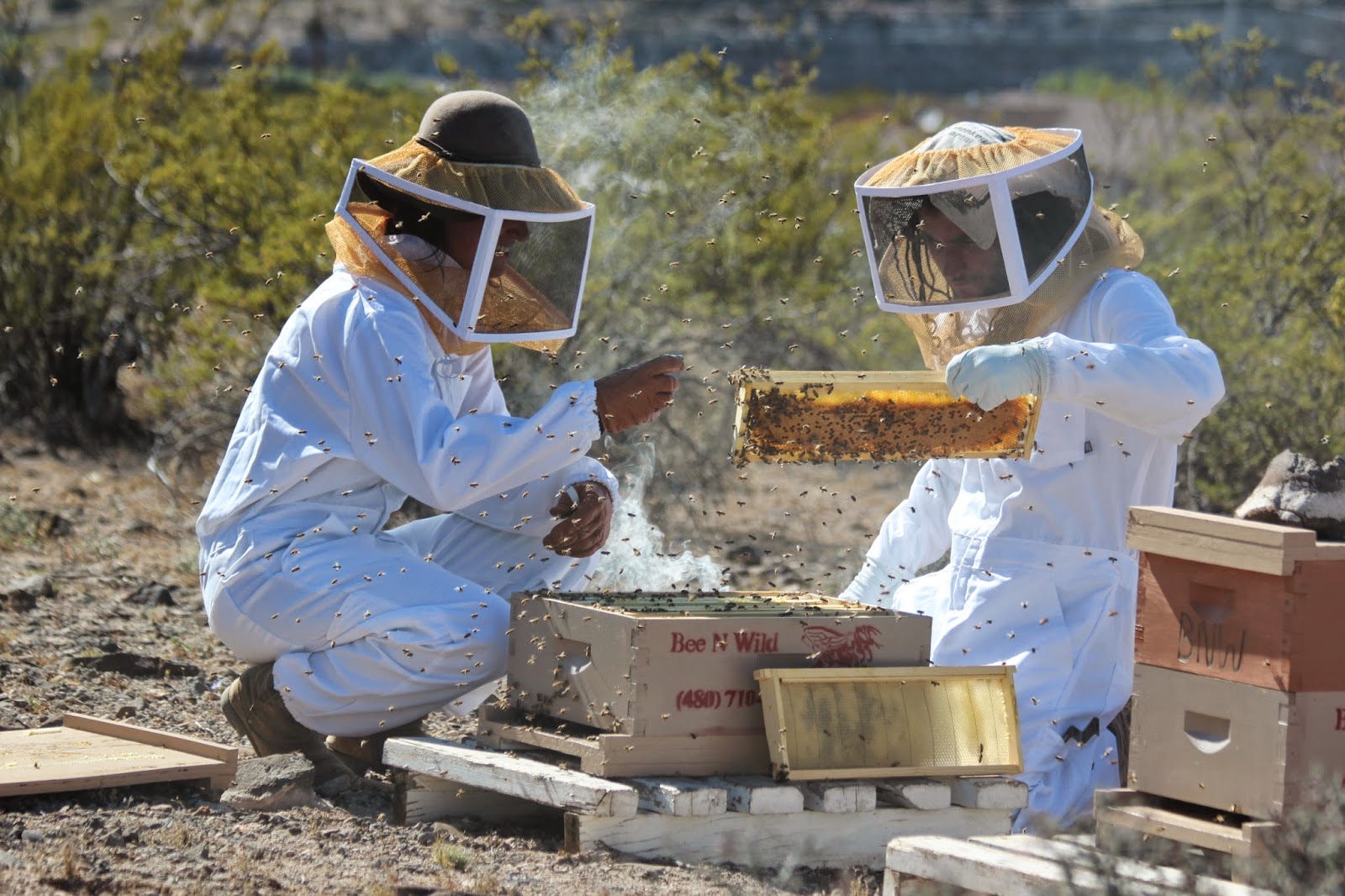 Juwels used the e-z pry hive tool to pop the cap on the hive, and we both squatted beside the buzzing scene, somewhere between disbelief and elation.

I puffed a little sage on the top, and the girls made way. As I said, we'd really just come there to add the second box, so the girls wouldn't run out of room and leave ... But once we were there, we couldn't help but pull a frame and take a closer look.

I let juwels crack the lid on the hive, so I got to bee the first to pry a frame. The sound of the buzzing when they'd all jump into the air around us was therapeutic and invigorating : ) What an indulgent hobby for the heart and soul!

It was so awesome to see them working. Stout and stinger-less drones (male bees) bumped along the throngs of ladies, doing their work. Nurse bees fed larva, and the larva could be seen clearly from the egg-stage to actual bees chewing their way out of the capped cell and seeing us for the first time !!

Bees were loaded down with their bulging bright orange pollen pants, licking tongues at each other, popping their heads in and out of cells, doing the waggle dance, and although we couldn't understand everything that was being said or done .. we knew it all had meaning, and we felt it too. 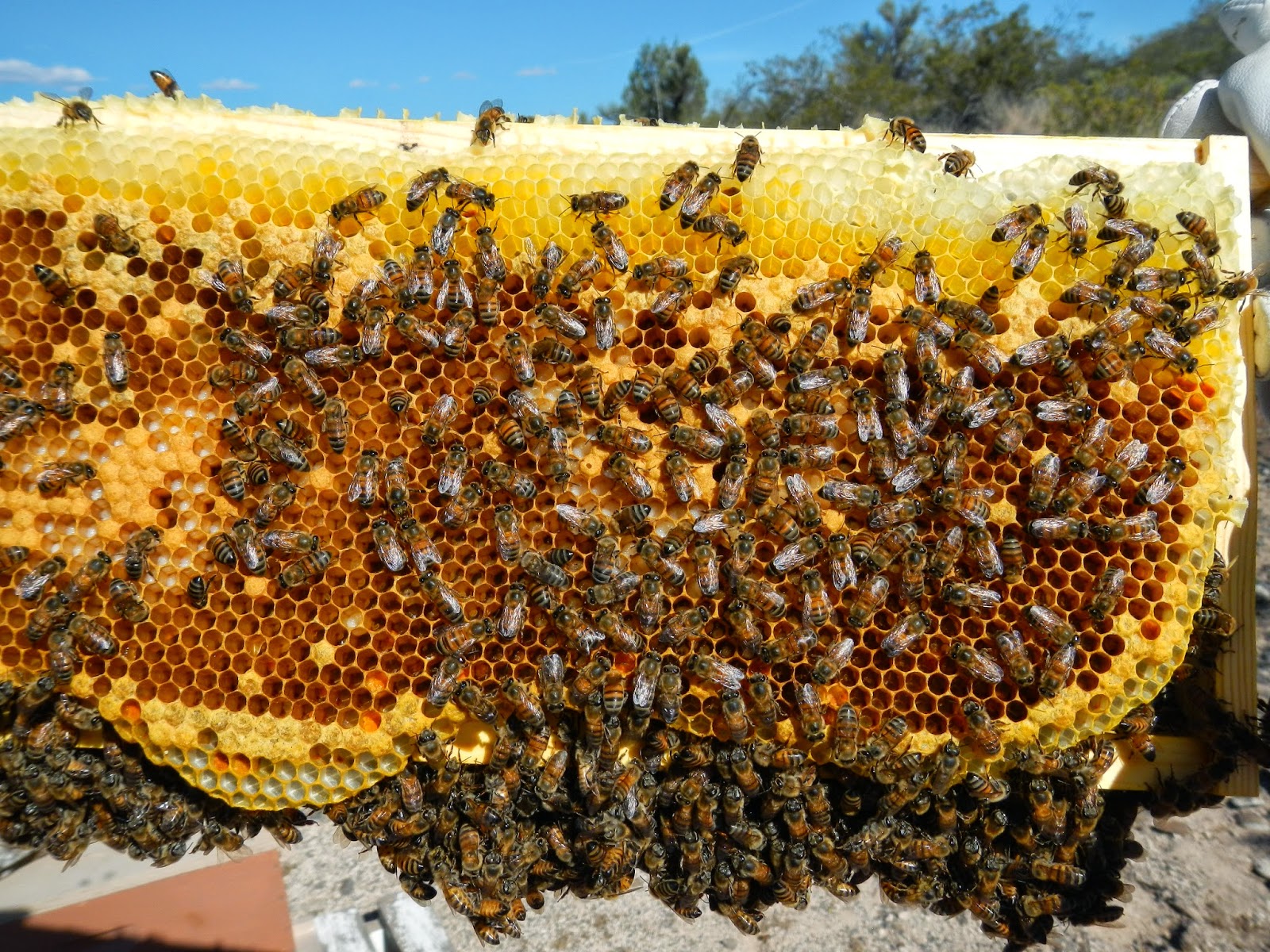 Some of the frames must have slid apart in the travel from down south, and the bees had used this extra space to double up their comb (this is why it's important to make sure the frames are tucked together tight with the right "bee space" .. but we spaced everything right and moved along.) 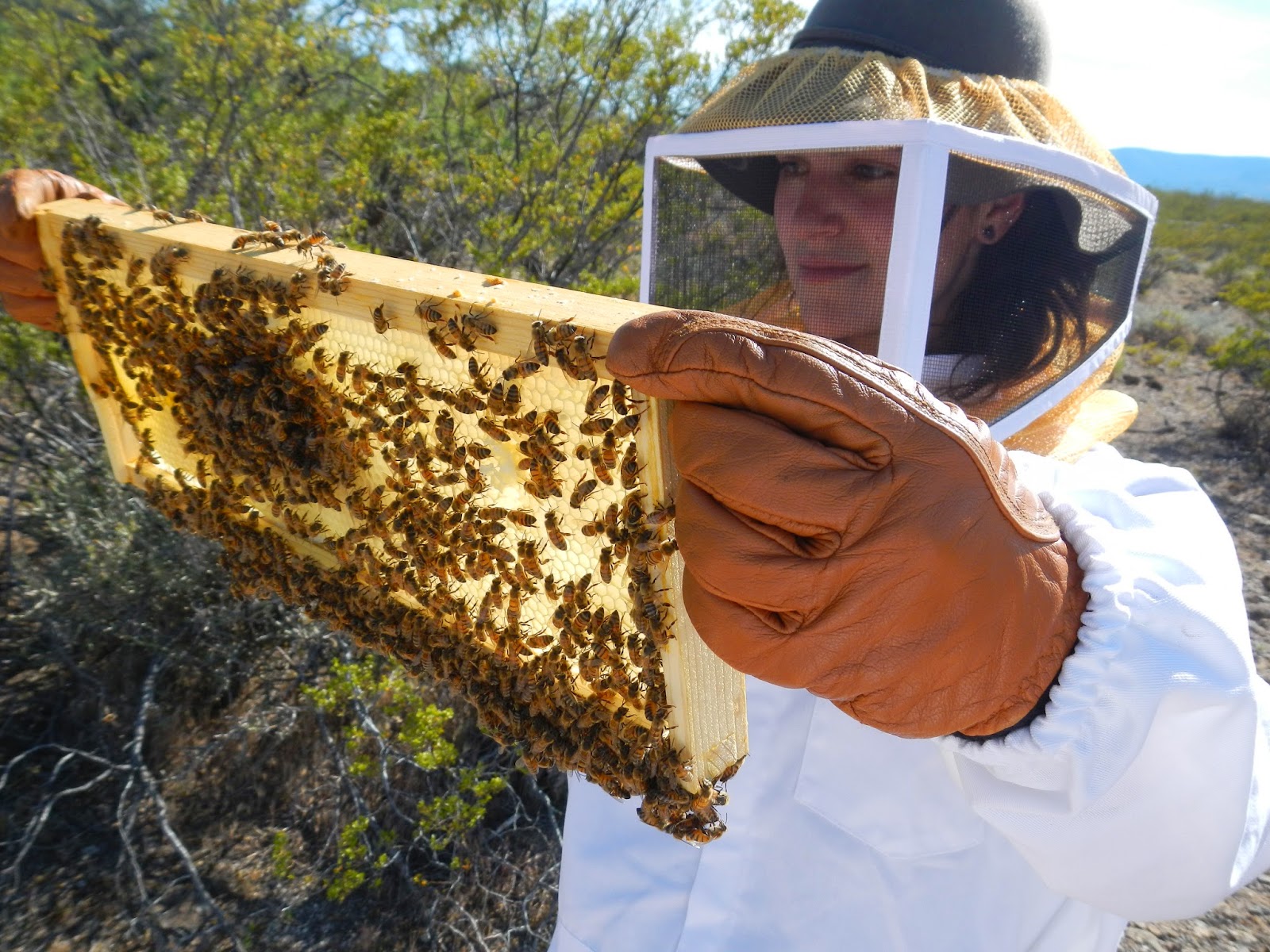 Below you can see some of that bright orange pollen and towards the middle/right, the milky white baby bees !! 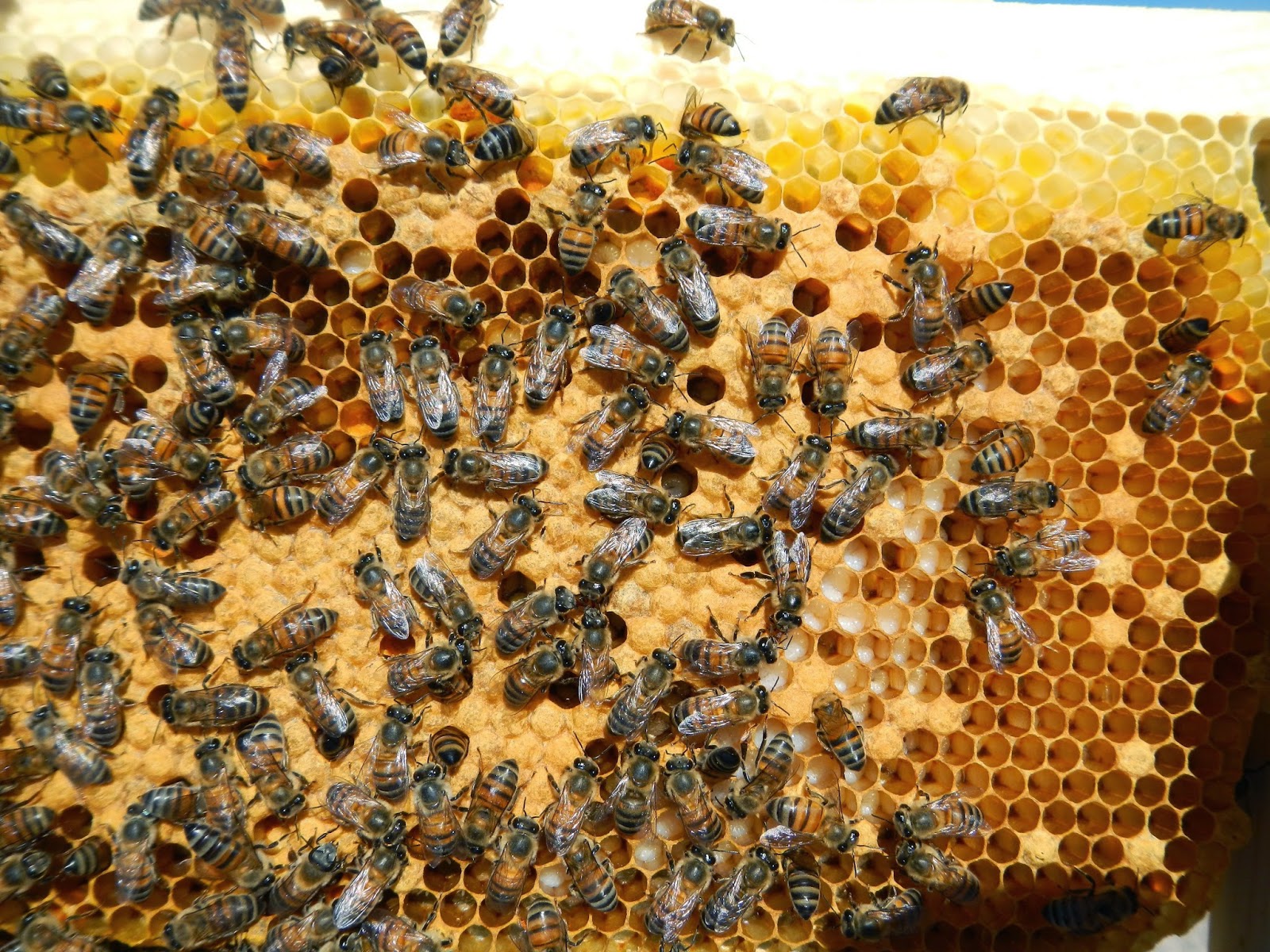 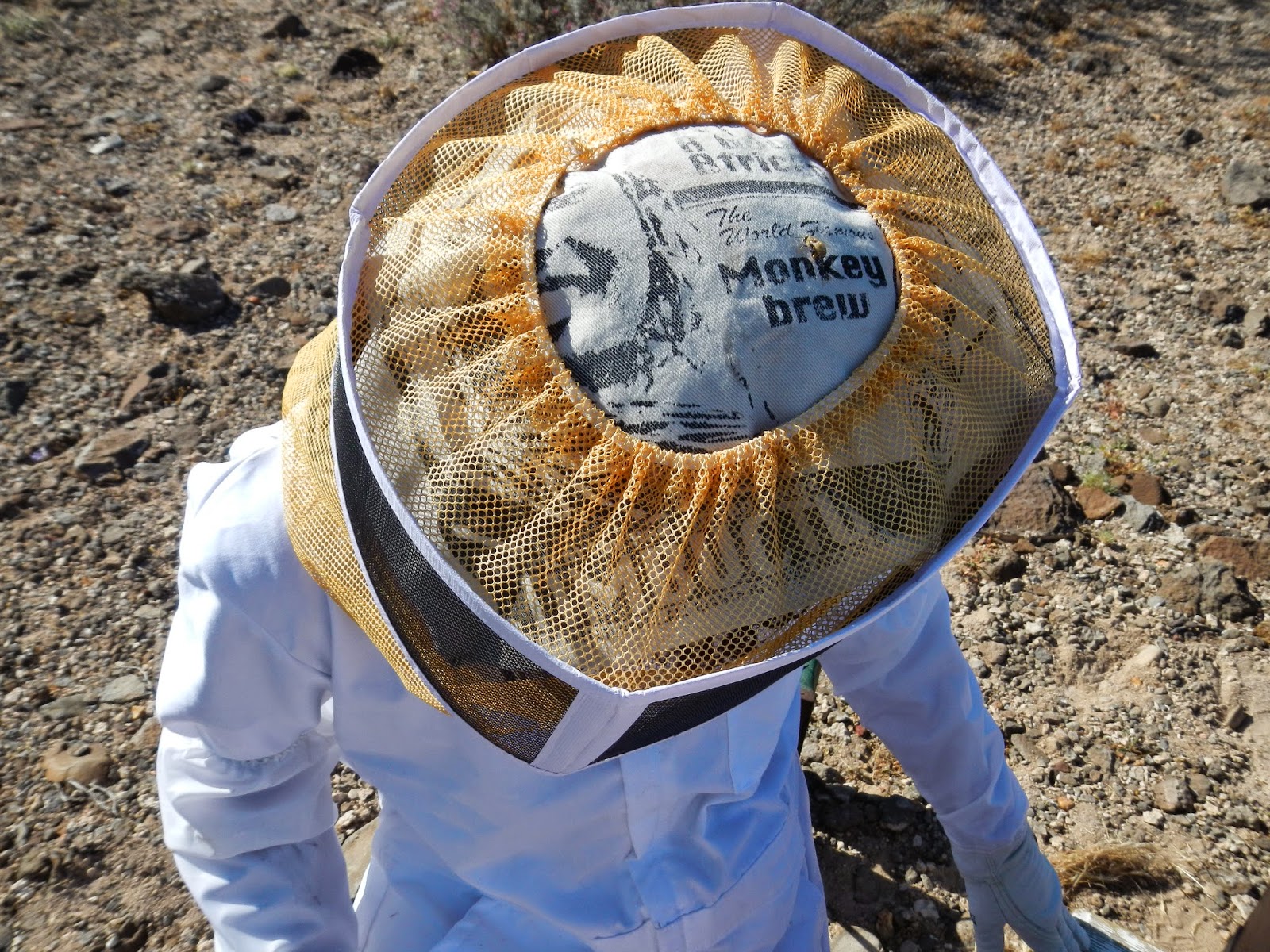 These veils normally work with a helmet of some kind, but they were on back order, so juwels covered my crown with a random tote bag .. ha ha ha .. did the trick ; ) 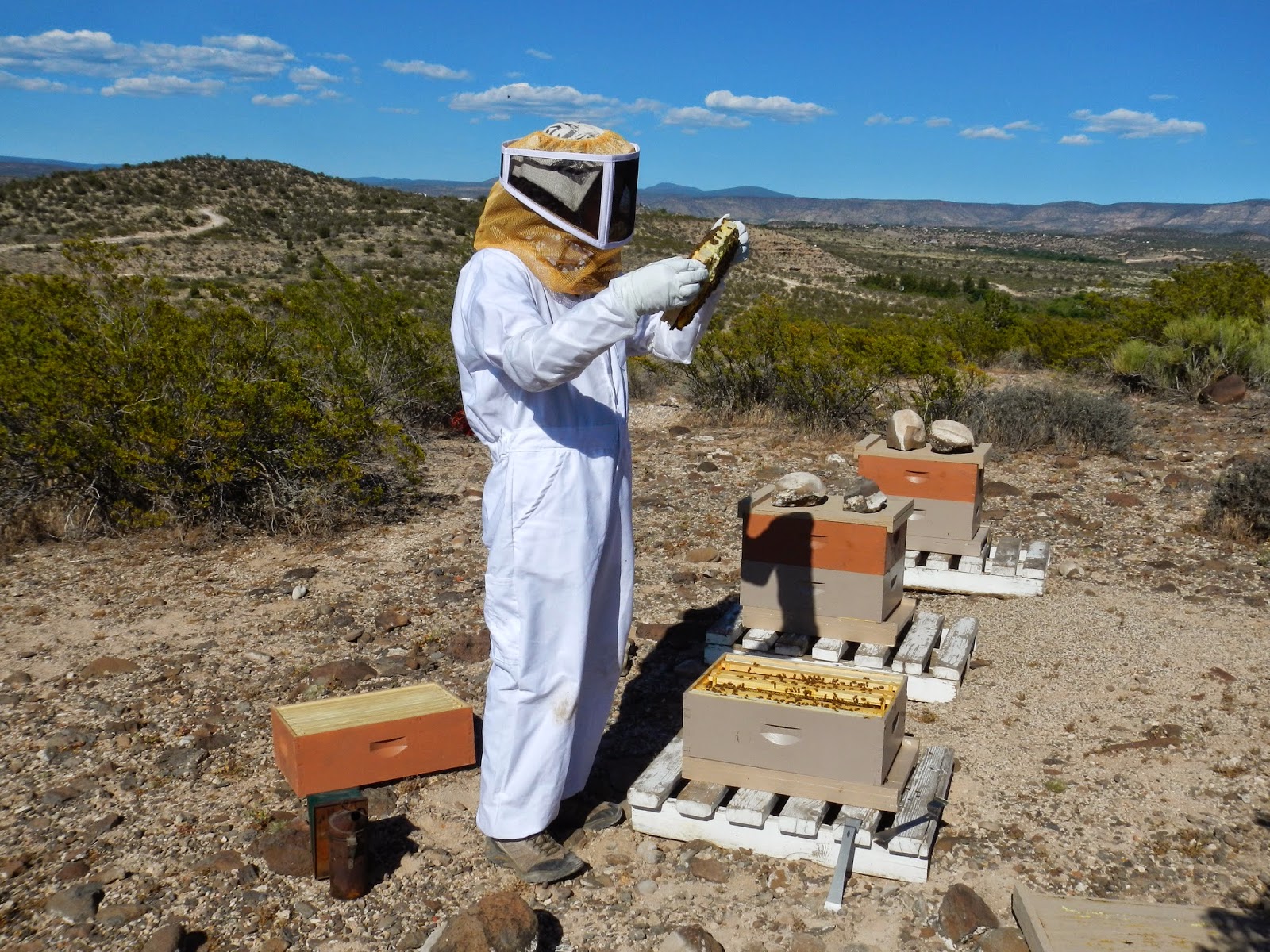 Our bees have the most open, beautiful living space amongst Indian ruins and blooming cactus... There's tons of mesquite trees and cat claw (both make amazing honey !!) and although there are already a good number of wild flowers, once the rains come .. it's going to be a candy land of selection !!

Oh .. and they have a sweet cool stream to drink from just down the hill : ) 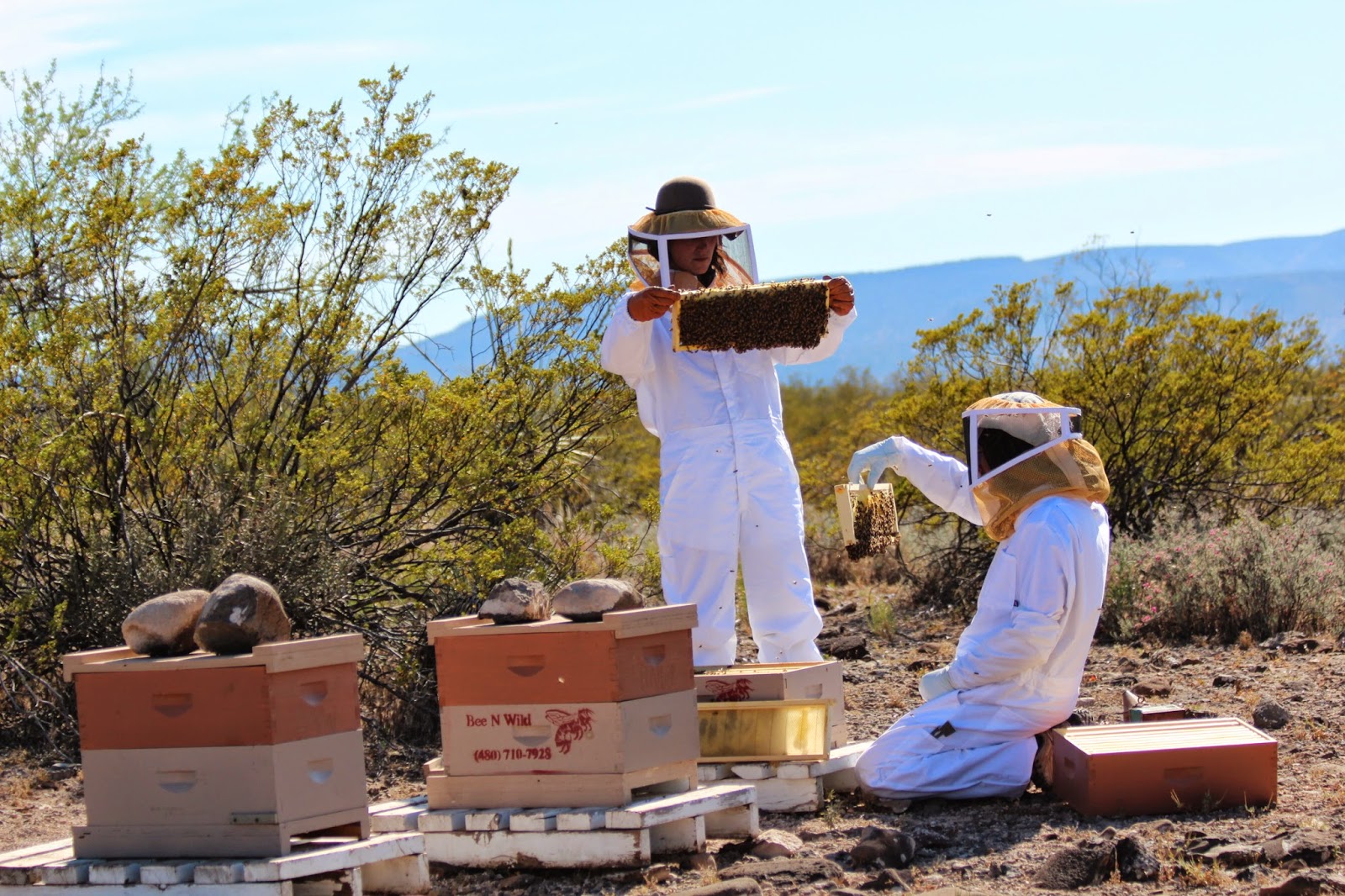 It was a great first meeting, and although we could've just sat there all day and watched them go about their biz, we know that they're really happiest if we do our work quickly and then let them on their way : )

And besides, we'd taken my brother along (plus our motorbikes) and we had further plans for a winding ride deeper into the desert to a secluded swimming hole (amazing place by the way, tree canopies, red rock dives into the deep water, rope swing, the works .. pics to come, maybe on face book .. 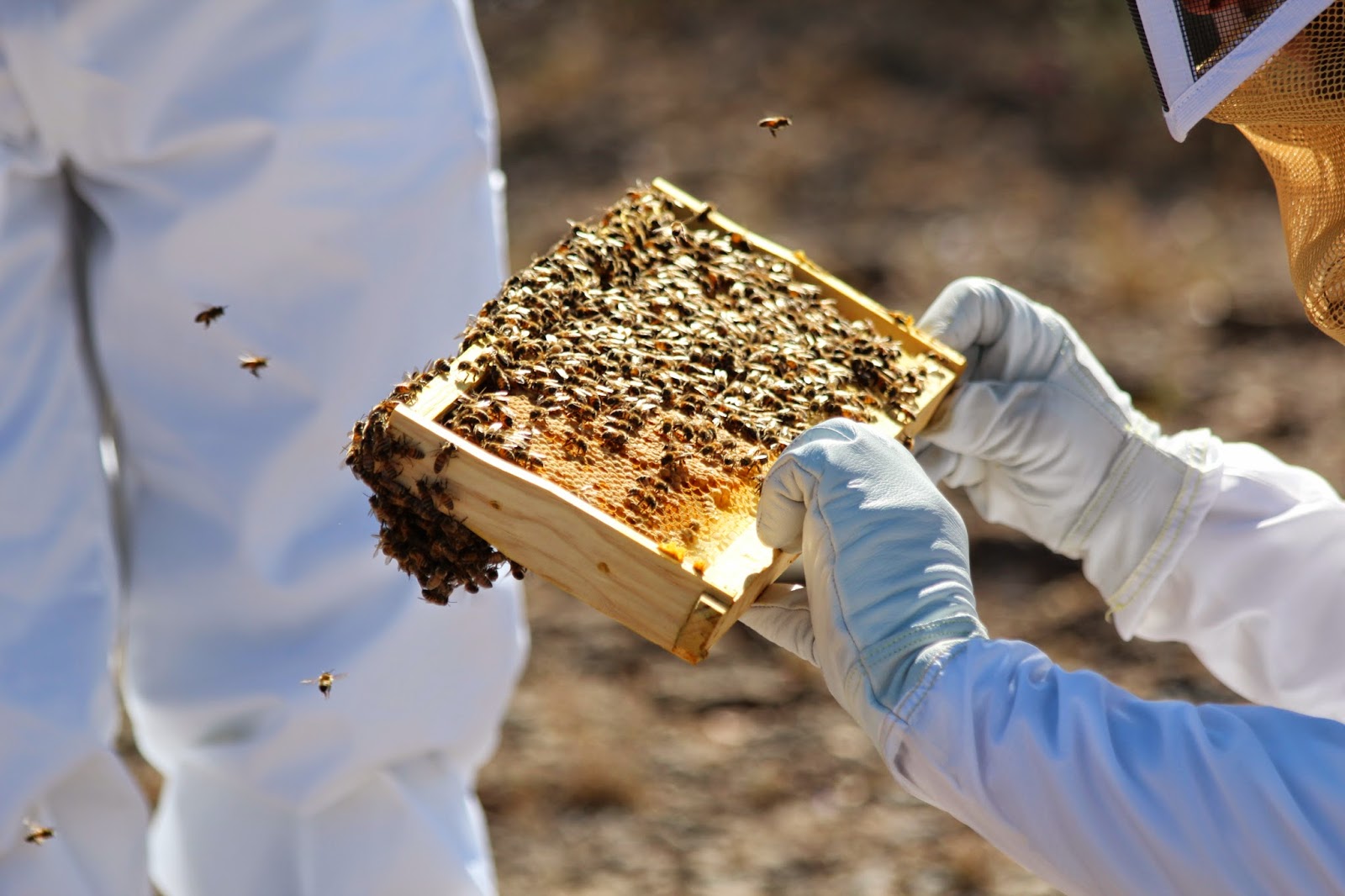 Thanks for checking out the first stages of our bee project + our fair share honey cause : )

And thanks Again to everyone who's help support this project !!

We're still planning to expand as the season moves on, but it's amazing to say that almost this whole thing .. boxes of hives to bee setup back home, suits, tools, the bees, etc have been community funded by friends and family, and in the slow season of candle making .. it's made this movement possible !!!! We are truly grateful!

Thanks for Voting with your dollar - we'll be sharing much-Much more in the future, honey too !!