I came across these pictures today, and thought we'd share a little tale on raising our kids ...

Now this happened a while ago, actually on the night that we were finishing our Bio Video and uploading it for that contest at the last possible second. And back then, we didn't have real internet here at the Hive, just a USB thing extended on a long cord, out the window and paper clipped to the eave of the roof, so we had to go over to my brother's place to get the right upload speeds for youtube.

And back then, we also had a problem with the back door not closing properly ... and this is how the burglars entered. I guess they were more vandals than burglars, since they didn't take anything away but rather consumed all they wanted right on the premises.

I was the first to walk in on the scene, luckily, because it gave me a chance to step out onto the deck and warn juwels (she's very particular about the cleanliness and organization of her space) "Okay ..." I said, "Ummm ... there's a mess in there. I just need you to prepare yourself before waking in."

She pushed passed me through the open door and gasped. 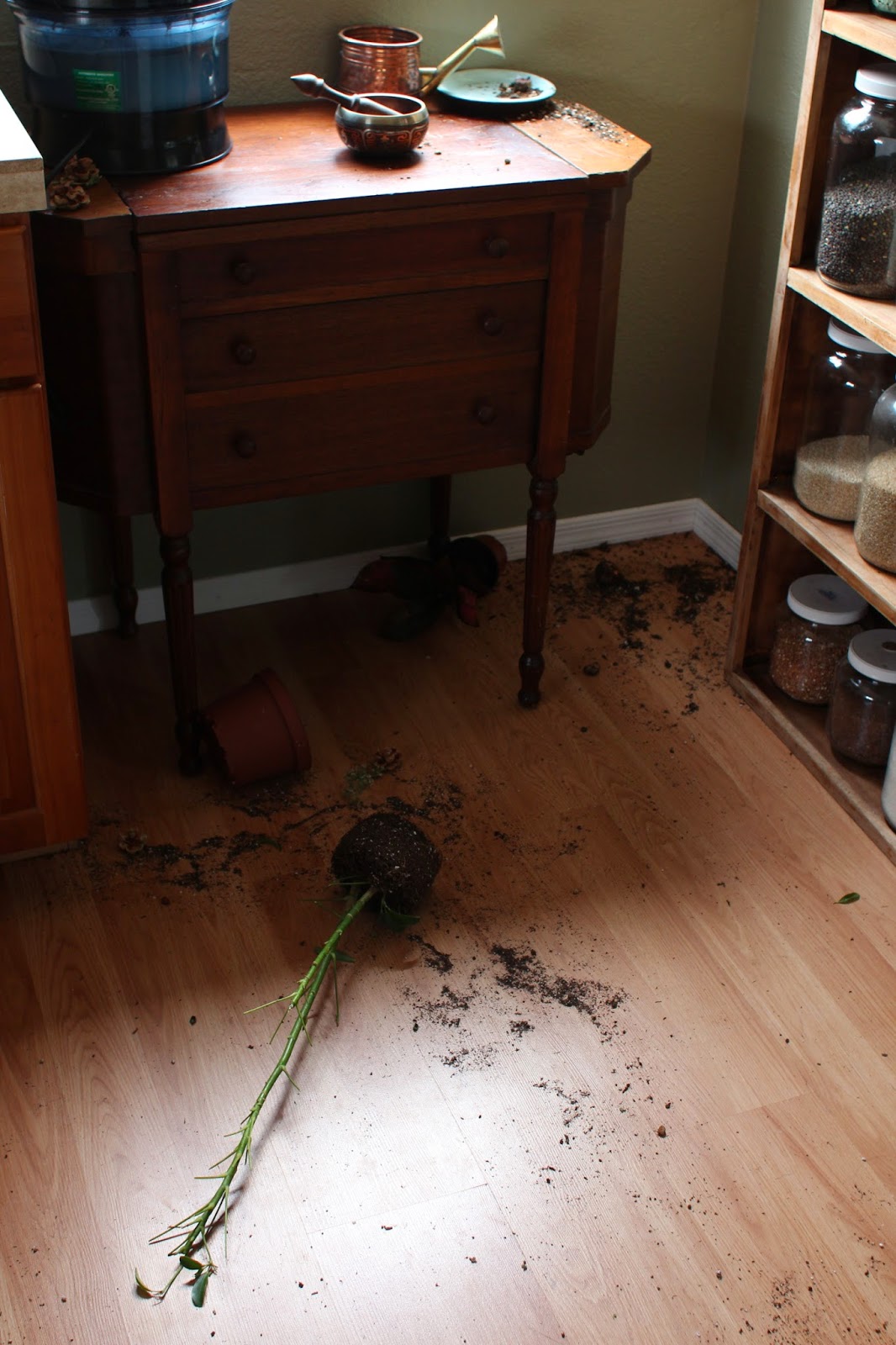 Potting soil, strewn on the floors, and plants nibbled down to the narrow green stalks.
It was a gruesome scene indeed. 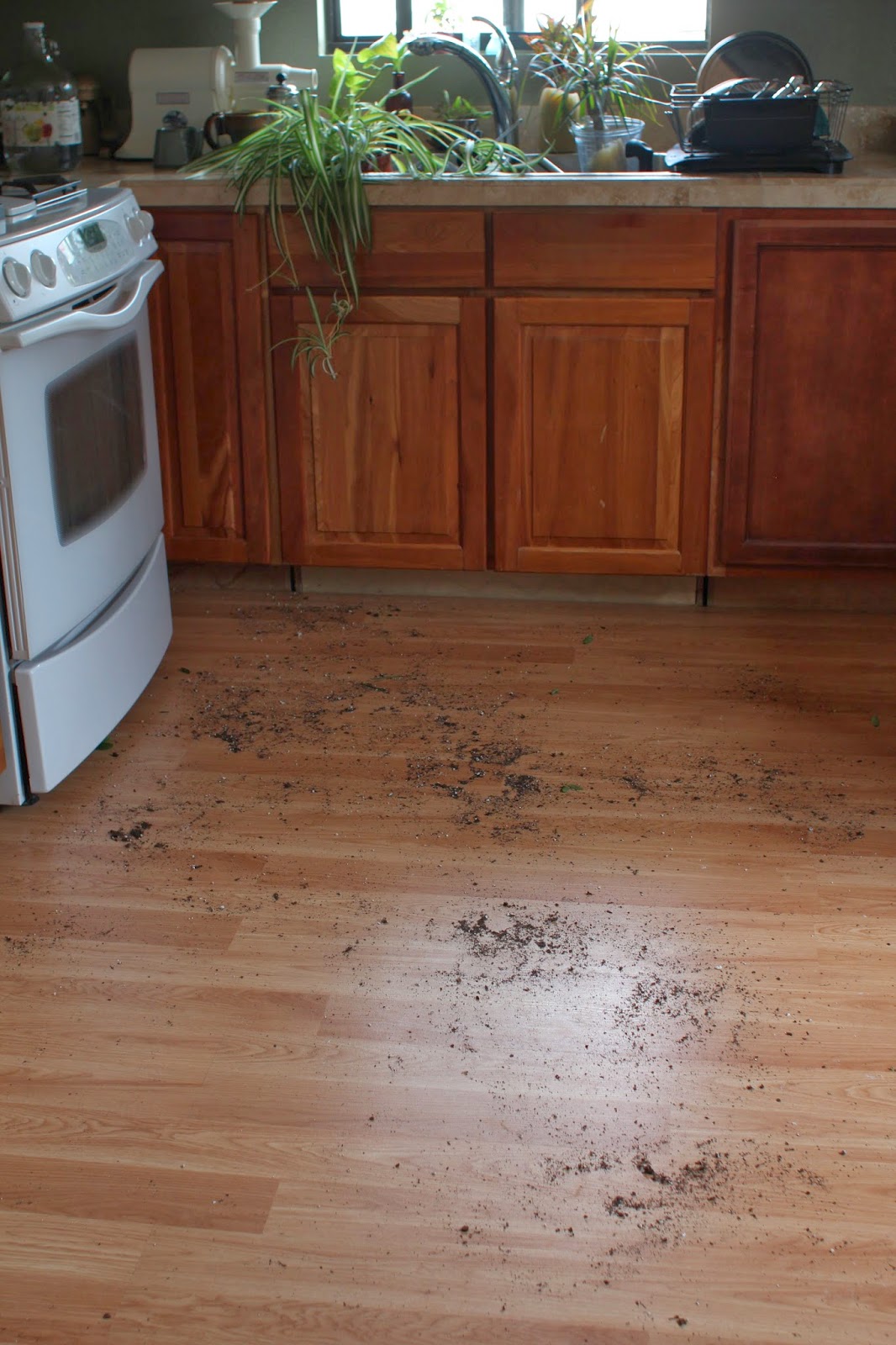 We found evidence of little hooves strolling across counter tops and goat lips grazing from the trash can. These little punks were partying, dancing on the ceiling. If we had a chandelier, no doubt they would have been swinging from it. 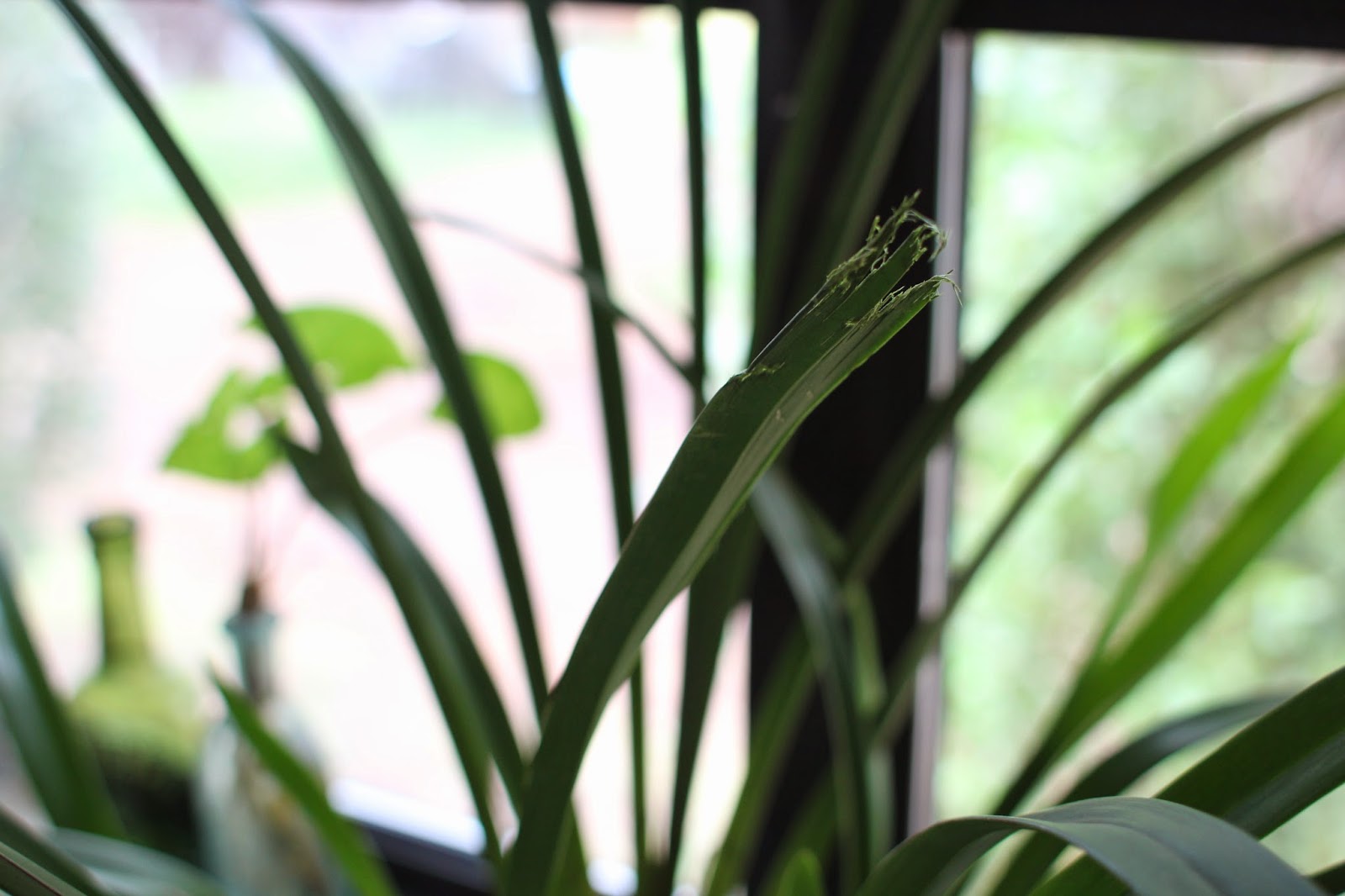 This orchid was sampled (from a standing position on the dining table) but lucky for her, she wasn't up to taste.. )

We also have antique bottles on the sill full of spring water and fostering vine clippings. They were spilled and toppled, but somehow not broken. 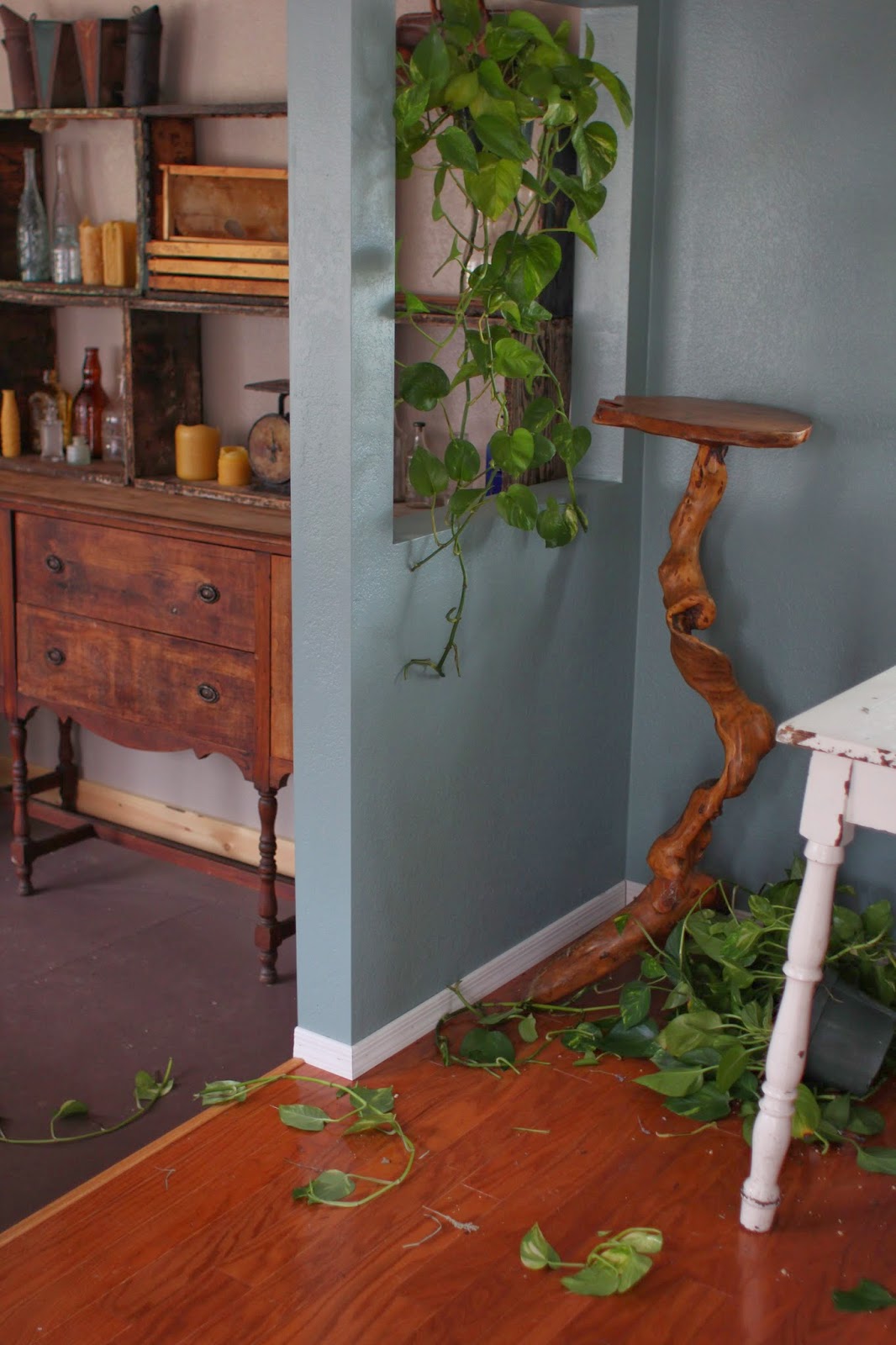 The hanging plant on the left, which juwels prized and named Rapunzel, used to touch the ground ... no more. 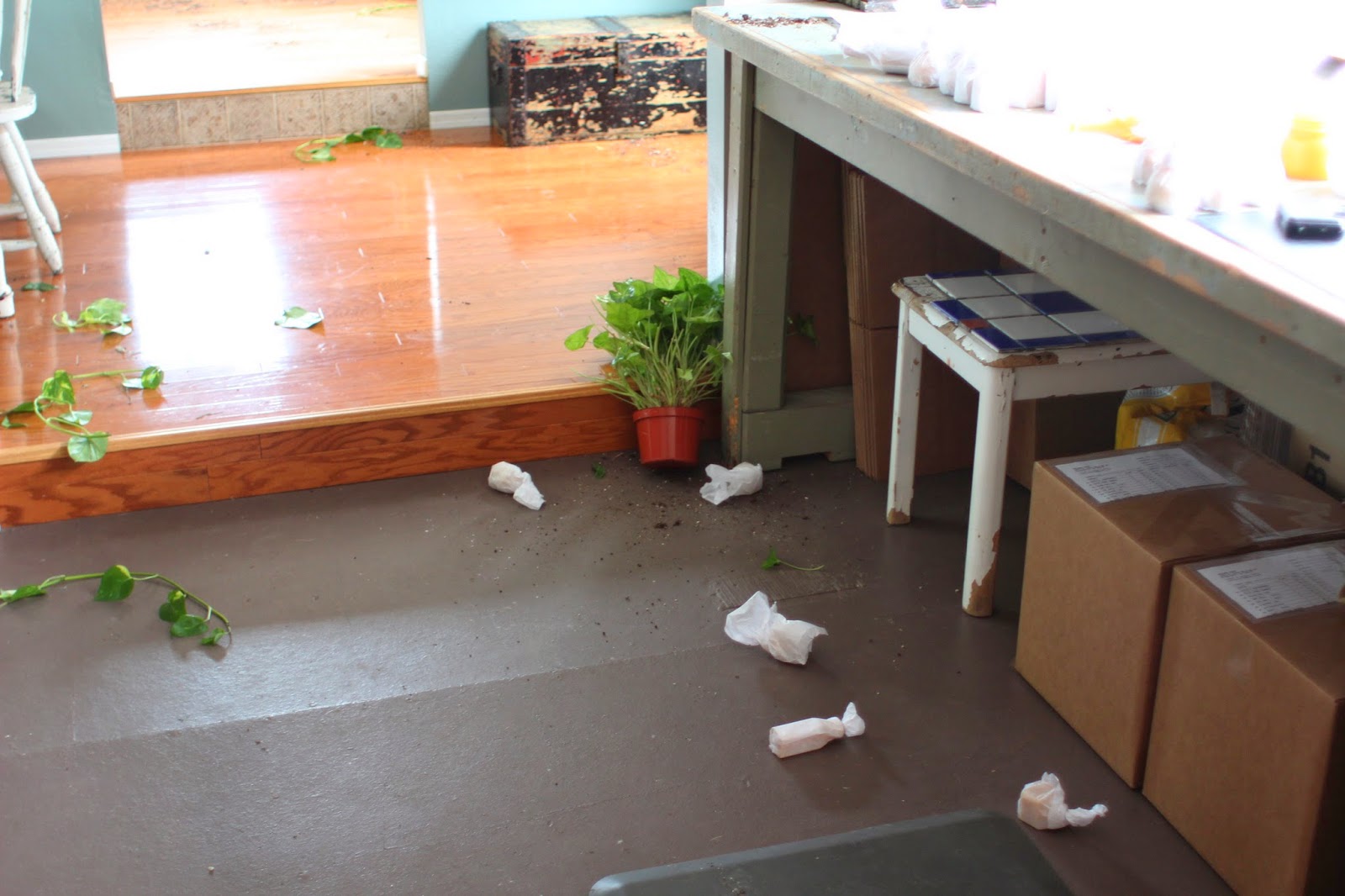 Finished candles, wrapped and ready on the packing table, were sniffed and chewed and tossed aside.
OooOoo .. Pappa was not happy to come home to this after working overtime on the shoot, video editing and interview. 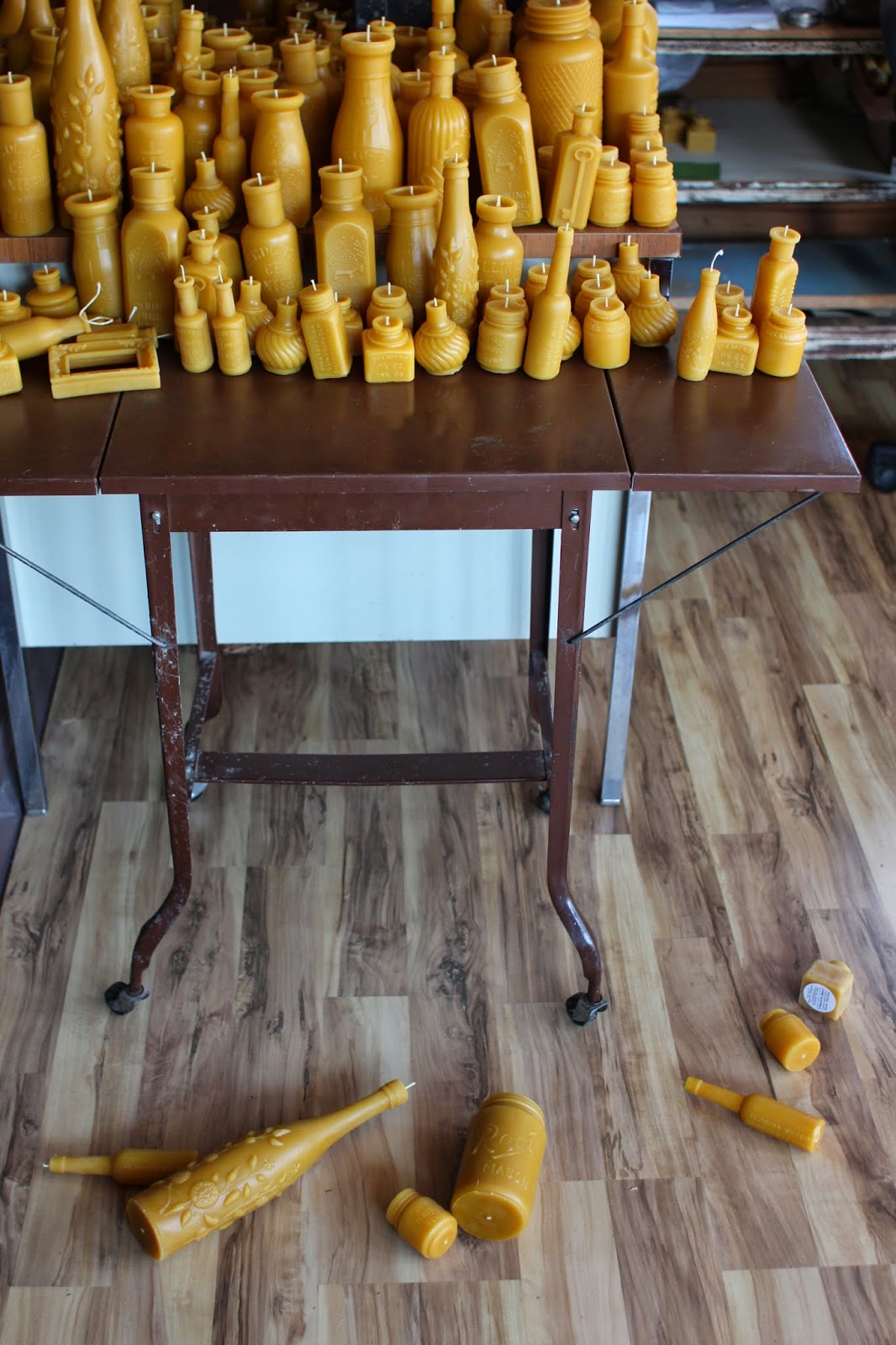 And in the pouring room, we found a mess of candles with dents and cartoonish teeth marks. They must have slowed by this point, because most of the product was left untouched ... Or maybe it hit them how far afoul they'd gone ... Or maybe it was the fact that most of the house plants that they were eating were mildly toxic, and they had had enough .. we'll never know what compelled them to flee. 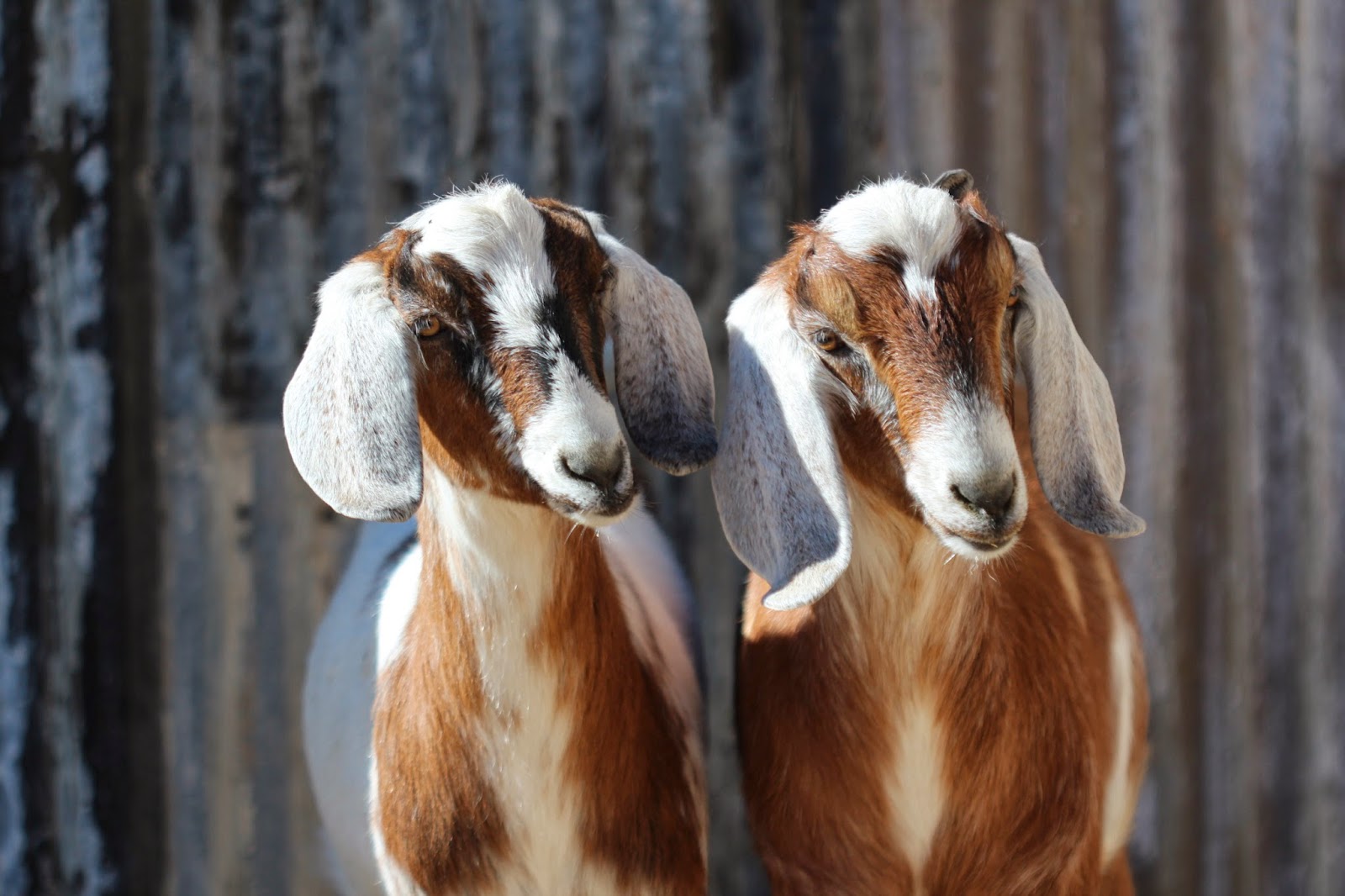 When we got back, they were just out in the yard, playing around like nothing was wrong, and after surveying the damage in the house, I called them over and gave them a good talking to. (This mostly consisted of parading them around the crime scene by the scruff of their necks and barking and growling and making all sorts of angry goat noises which I hoped they'd connect with their actions.)

They're goats .. I know. And they eat plants, sure. But they'd been warned, and trained, about these plants, and jumping on counters, and they knew just what they were doing. (smarter than dogs, they say ... More stubborn too. )

After that, we never had a problem with the plants again. If we have them in to sit by the fire or to listen to one of juwels' piano recitals, all it takes is a sharp look or a billy-goat grunt, and they pull their little snoodles far away from our taunting green housemates ; )

It was seriously a crime scene, and I wished so bad we had a security camera rolling when it happened. The door has since been fixed, and the plants are back to normal ; )

.... oh, juwels just reminded me that there -was- one other occasion that they got in through that old trick door. This was a while after, and we were out of town in NY for 10 days, and our neighbor was watching the babes. And on one evening she came by after dark to lock the chickens up and check in on the girls, and they were nowhere to be found.

She walked back and noticed the door hanging open, and knowing what had happened with the plants and candles in the past, thought, "Oh Sh*t" !!!

It was dark, and she couldn't find the light switch from the doorway, so she flicked her flashlight on. Wincing at what she might find, she saw the goats in the spotlight, snuggled up on the futon and totally asleep.

"I looked around, and they hadn't touched anything." she said, "And I felt so bad moving them out .. they didn't want to budge, and they were giving me a look like, 'Nooo ... this is where mommy and poppy live. Leave us here .. Pleeeeease !!"