Crossing the Mojave by night - Part Two - the Finish

At the slightly dismal close of part one of our journey, we left off on a stormy night in a little one-horse town called Blythe. Juwels was on the verge of a breakdown (much like the Winnie) and I was atop the roof trying to keep the skylights from blowing away in the wind. Veins of electricity shot webs across the sky, and the wind was gusting in the wrong direction, so we'd be struggling even harder to cut through and make any headway.

As we waited in the lot, I sat in the driver's seat, listening to my dad on speaker phone. He read me the mileage between the next half dozen towns we'd hit from there, and I tried to fix the windshield wipers for the last time. After a small flame appeared at the tip of the wire in my right hand, I thought it best to just keep my fingers crossed that the rain would stay light rather than burning out the fuse to something serious like the headlights or the ignition. We decided to venture on after all, thinking that we'd rather be stuck in the rain on some peaceful and desolate side road in the desert rather than this Mickey D's/ Greyhound lot where things were beginning to mirror the final scenes of MJ's Thriller. The lyrics even started to play out in my head, "It's close to midnight .. and something evil's lurking in the dark."

After filling up with gas (and taking full-nude bird baths in the restroom sink) we pulled back onto the I-10 and fought the storm. A short ways down the road, our directions actually steered us off the 10 East , and we entered another small highway ... north !! We were driving into better weather, climbing elevation, and the temperature was dropping. 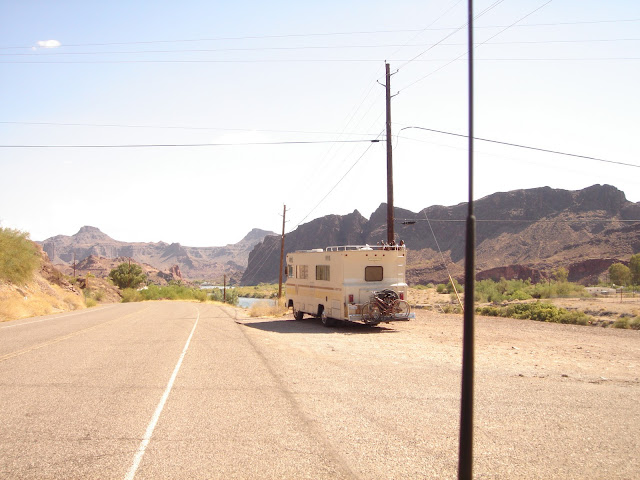 (above is a picture taken the following day ... still not at our destination, and still stuck in a little cross-roads town, but if you look way up there past the Winnie, you can see what kept us sane and cool and alive as we waited for the heat to pass so we could reach another night of driving: Water !!)

After we left Blythe that night, things were looking good. We weren't being blown off the road and the Winnie's temperature gauge was actually cooling. Everything was going so well that there were even some murmurings about just charging the whole rest of the trip that night, but when we pulled off at a gas station in Parker, AZ, and I went in for a drink ... I came back out and found Juwels dead asleep at the wheel of the trucka .. with engine still running ; ) I kissed her on the forehead, and asked her to turn off the engine. She did without hardly opening her eyes ... which is no small task seeing as though the truck's missing her ignition, and has to be skillfully cranked on an off using a pair of needle nosed pliers and a loose gear.

I went back into the gas station, and asked the woman behind the counter where we might be able to find a place near by to rest our eyes for a while.

"That's your old motor home out there in the lot?"

"You can just leave it right there where it is ... I'll tell the guy who works in the morning that I said it's fine."

She was rather chipper for 2am, and she even told me about a swimming hole just down the street at the Parker Dam. She said it was crowded on the weekends, but that we should have the place to ourselves tomorrow. The idea of swimming and scrubbing and floating on our backs sounded too good to be true.

Back at the truck, I roused Juwels out of the bench seat. "Come on, babe, let's get you to sleep."

"Right here. I talked to the lady inside, and she said we could crash in the lot." 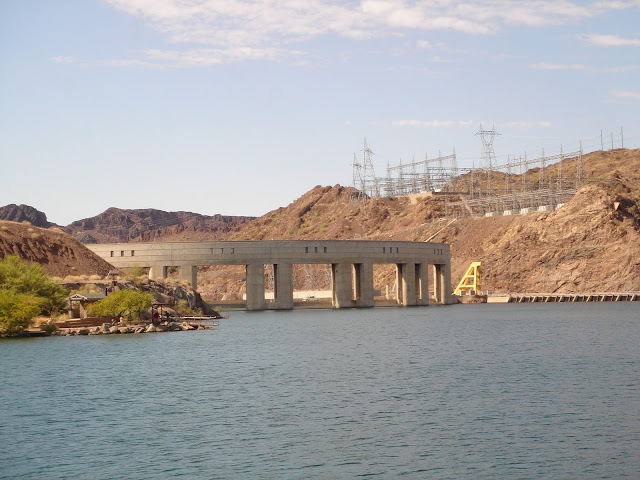 Even at that hour of night, it was still very hot, about 90 degrees, and I let Juwels sleep up in the crow's nest alone (that little bed near the ceiling really traps the heat, and we'd slow cook if we were both up there together.) I popped the small windows at the head and foot of the bed, and bid Juwels goodnight. To reach my slumber, I had to literally tunnel through boxes and bins to get to the back of the Winnie. I removed a big box from the foot of the couch and then climbed into the cubic space; then I pulled two more out from behind my back and lied down in the little void, with boxes stacked up tall on one side and the open windows on the other. A faint breeze came in every time a night train would hiss and rumble past, and I even felt a little guilty that Juwels was up in the stale forehead of the Winnie, but I soon passed out. 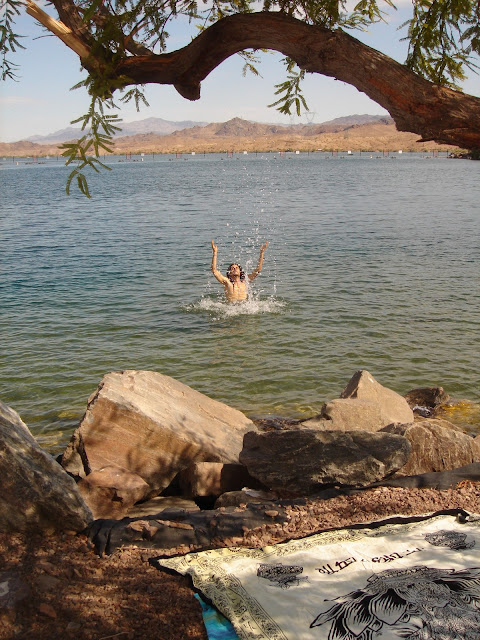 We set the alarm for 6am, because we needed to hit the black top before the heat waves rose and we'd get stuck at that gas station until the next sunset ... we needed to reach that oasis. It would be our second honeymoon ... our heaven. 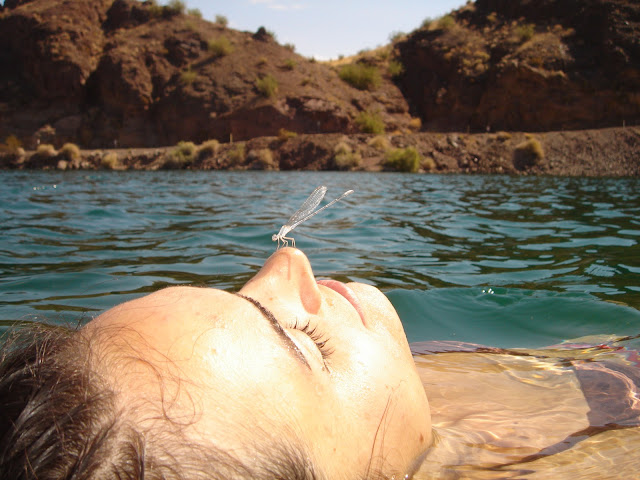 After waking up in a cold sweat at the end of a blink-done sleep, we headed out and found the dam. Juwels brought her soap and shampoo, and we scrubbed and swam and floated like jelly fish. And Juwels even made a little friend (pictured above) .. it was the funniest thing: every time she'd get into a good float, and close her eyes, Zzzzt, this sleek gray dragon fly would hover about and then land on the tip of her nose ; ) It happened over and over. We thought it was just this one enamored insect, but at one point, she actually saw two of them swooping in and fighting over who got to land on her nose .. ha ha ha. 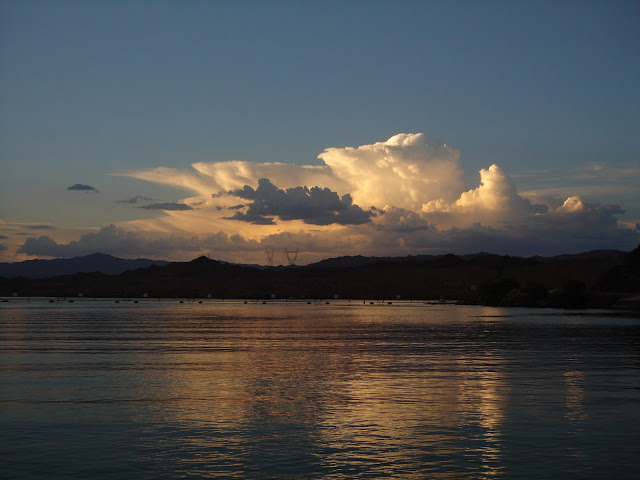 It was a special place, this tiny alcove near the pit toilets, tangled fishing line and rusty lures. Our thin blanket was spread across gravel, but we were together, away from the machines, so it might as well have been goose down. I had to flick some dry-yet-potent dog doo away from our space using a littered Coke can as a shovel, but we were gitty. We tried to control our glee and splashing about because some all-American Dad and his young son were fishing just 5 feet away. I met a school of small fish who took a liking to pecking at my toes. Juwels called it a Pesce Pedicure : ) And then, just before we left, this extra large diablo fly came by and landed on Juwels' shoulder. This was like no other fly we'd ever seen - jet black with a tuft of velvety light gray fur on his back and giant all-seeing eyes. He should've had spurs, a six shooter and a sombrero : )

"You've gotta see this giant fly that just landed on your shoulder !!"

"Is that what that noise was?" (he was beautiful and loud)

"Wow .. he's cool," Juwels said, peering at him from the courner of her eye.

He took a few steps around, standing on her wet blanketed hair closer to her neck. She couldn't see him anymore, but she had this excited look on her face over the idea that yet another strange creature of flight had chosen to pay her a visit. "What's he doing - What's he doing  ?? !!"

"He's nestling his face in your hair."

She smiled. "He must like the smell of my conditioner..." (Juwels likes to think of herself as some kind of whisperer of all creatures ... a belief that'd just been confirmed and inflated by her magical encounter with the dragonflies.)

I saw her face contort into a kind of grimace of pain. "Ouch !!!" She yelped. "He just BIT me !!" She thrashed around in the water and then submerged completely, leaving me alone with the little blood sucker.

He went buzzing off, and then circled around us ... he had blood on his breath. I dunked under water and tried to wait him out, but when I popped back up, there he was. We retreated to the blanket, and hid under our towels. ZZZzzzz ...

I grabbed a book off the gravel next to us, something about mindfulness and meditation. "That's it - I'm gonna get that little vampire!!"


Okay - my selective attention span is maxing out on this drive story .. so we'll sum it up by saying:

We left that night in another electric storm, but it stayed dry, and we were refreshed and all wrinkle toed and blissed out from our life aquatic, and the Winnie drove amazingly : )

Once we passed through Parker's beautiful rock formations, back lit by lightning, the air grew cool, and in that cool air, the Winnie was a rockstar. Besides having to crawl under the rear tires and keep squirting oil in the axle, everything went great - 55 miles an hour up hills that ran for 50 or 100 miles at a time. It was an unbelievable rush to be at the wheel of that beast, like riding a 6 ton bull, all grit and muscle and sugar and spice. We were so proud of her, and my thinking went from, god, I can't wait to moor this thing and not drive again for a long, long time, -- to --  maybe we should drive to Alaska : ) We drove all night and through the early hours of the morning, and as the frost was steaming up in the warm sunlight, we'd made it to our new town in the mountains, Flagstaff.

thanks for reading, love,